The drama behind the scenes of Metal Gear Solid companies Konami and Kojima Productions is heating up.

Whispers started to swirl this morning that Metal Gear Solid creator Hideo Kojima has left Konami. This started because the publisher has removed references to Kojima Productions from many of its websites. The company has also stripped “A Hideo Kojima game” from artwork for The Phantom Pain. But Konami has said that the legendary designer is still plugging away at Metal Gear Solid V: The Phantom Pain, which is due out in September. But now the rumors have evolved to suggest that Kojima and his staff at Kojima Productions are working as contract employees only until they complete Phantom Pain, reports GameSpot. Konami is a company that made around $563 million in revenues from video games through the first nine months of its current fiscal year, but it’s also made more than $700 million from its other businesses.

So maybe it’s looking to away from games for its future.

But if Kojima does leave because his contract ends this year, it could have major implications for the future of Konami. Last year, Kojima announced he was developing Silent Hills, the next game in that horror franchise. We’ve asked the company for an update on the status of this game. But beyond Silent Hills, Kojima is one of the last big-name game producers at Konami. Dropping Kojima and his team is potentially a sign that Konami wants to shift more of its resources to mobile gaming, casino gaming, and pachinko, which are all areas that the company has interests in. Casino products brought in $191 million through the first three quarters of the year, and pachinko did $83 million. While Metal Gear releases do make money for Konami, it’s less important to its bottom line these days than in the past.

Konami is clearly in a restructuring phase, and having Kojima running his own outside studio with Konami money doesn’t sound like it fits any longer.

“As we have already announced, we are shifting our production structure to a headquarters-controlled system, in order to establish a steadfast operating base capable of responding to the rapid market changes that surround our digital entertainment business,” a spokesperson said. “Konami Digital Entertainment, including Mr. Kojima, will continue to develop and support Metal Gear products.”

While the company is saying that Kojima is still around, Konami will not address why it is removing Kojima’s name from its branding. And it’s also not mentioning Kojima Productions or what is happening with Silent Hills.

Above: Reddit users found that Konami was removing Kojima’s name.

And getting rid of Kojima Productions is not that crazy for Konami. The company, like nearly every publisher in Japan, has shifted away from triple-A console games that cost millions of dollars to produce. Instead, Konami Digital Entertainment is embracing mobile games.

During the company’s last financial quarterly report in February, the publisher revealed the games it has in the works for its current pipeline. Only two, Metal Gear Solid V and Pro Evolution Soccer, were in development for the Xbox One and PlayStation 4. Compare that to five mobile games and six for arcades.

Konami is just not that into making console games. 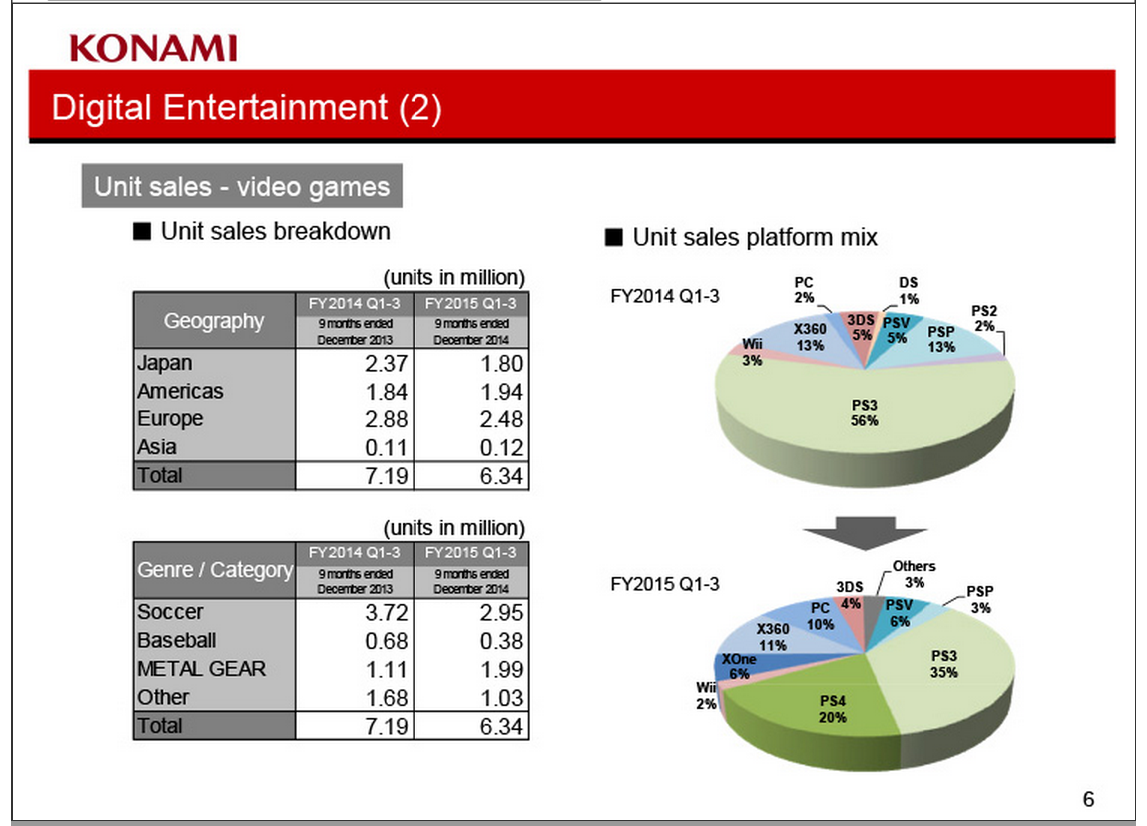 Above: A breakdown of Konami’s games by unit sales.

Konami also has wider interests. While Konami Digital Entertainment, its gaming division, makes the most revenue, the company generates nearly just as much from health-and-fitness related products. The company is also seeing consistent growth from its casino-gaming division and pachinko-machine division.

The casino business is growing especially well for Konami.

If Konami is getting cost conscious — if it is paying attention to margins — it could easily make sense for it to stop putting so much upfront money into massive projects like Metal Gear Solid games. Instead, it could break up that budget and throw it at dozens of mobile games while trying to get more from its casino attractions. Above: I don’t see any Silent Hills on this list.