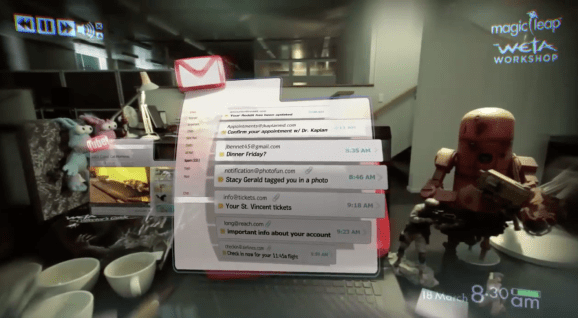 As virtual reality and augmented reality get more sophisticated, new demos appear every day that showcase what’s possible with the technologies.

Today, Magic Leap, an augmented reality company that recently took $500 million in funding from Google, sent out this demo video, showing its own technology in use at its own offices.

In the video, we see how the technology can be used for everything from making Gmail more fun to playing video games. Magic Leap recently canceled an appearance at the TED conference because it wasn’t ready to show the tech. But it is one of the companies seen as a leader in the AR and virtual reality spaces, and a competitor to Oculus VR, which is owned by Facebook.

In an email about the video, Magic Leap wrote, “Unfortunately, we couldn’t make it to TED, but we wanted to share one of the things that we’d planned to share at the talk.”