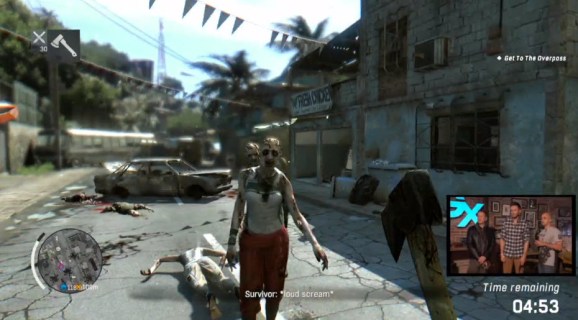 Dying Light is about to get some downloadable content to keep players even more engaged.

Gaming will never get over zombies, so it’s good that developers are still making good games about these dumb walking corpses.

Dying Light is the latest release from developer Techland, which was previously best known for the zombie-survival game Dead Island. It’s back with another take on that genre with a few changes mostly in terms of the perspective and movement.

So does Techland offer anything worth your time in its latest release? Definitely.

Great locomotion for an impressive world

The quick pitch for Dying Light is simple: It’s a zombie game with parkour. That means you can run fast and jump over things easily as your character is very agile.

And this makes it a great deal of fun almost immediately.

Considering that your primary interaction with any game is how you move through it, it’s always important to get right. Dying Light really does. It gives you weighty-but-responsive controls and a predictable-but-capable jump. The result is that your character can make some impressive leaps, and you always feel confident that he’ll land precisely where you want him to.

Dying Light encourages you to stay off roofs, and you’ll want to do so anyhow because it feels so good to traverse the terrain. The game only gets more fun in terms of movement as you play and unlock more upgrades. Some particular highlights include the ability to catapult yourself off the head of a zombie as well as a baseball-style slide.

A fun, beautiful world to explore

Getting the motion correct is only half of the equation. Techland also delivers a world worth exploring. It’s full of side-missions and loot to collect, but it’s also gorgeous.

The streets are overrun with zombies, but they’re also filled with detailed cars, sizzling fires, and realistic-looking buildings. And it’s not just that the textures are high-definition — the world has a very kinetic sense of life thanks to particle effects and animations. As those fires burn in a car or trash can, they send ash and smoke into the air. Hand-painted banners wave in the wind. Trees shake and sway in ways that are so lifelike that they almost make up for the fact that I’m sitting outside instead of enjoying a beautiful day in nature.

Dying Light is just a fine example of a big, open-world game from an established developer done well. While Steam has plenty of survival releases that are bigger or more open, this is probably the best-looking entry in the genre so far.

Techland used a familiar experience-point system in Dying Light. You have three main skill sets. One for combat, one for movement, and one for survival. You get experience for each of those things by doing those things. This is relatively easy. You can jump around and fight off a half-dozen zombies at a time and slowly upgrade your character.

Or you could go out at night.

Dying Light features a night-day system, and everything in the world is rougher and tougher when the lights go out. Super-zombies hit the streets when the sun dips below the horizon, and you’re only truly safe at this point in a predesignated zone where the undead cannot get you because the humans have set up UV light arrays.

But, of course, the game encourages you to go out into the night by offering you double XP for everything you do. And if you survive an entire night, you even get a bonus.

It makes it worth it, and I would even argue that nighttime is the “real” Dying Light.

During these sequences, the super zombies — which are marked on your map with big red cones to show you where you need to avoid — are on patrol. If they spot you, you can either use your UV flashlight to briefly stun them, or you can use a UV light trap by luring them into the right spot. But most of the time you’re going to die.

So dark is a real nightmare, but it’s also exhilarating. And when you do survive, and bank those experience points, it’s worth it.

Now, Techland didn’t stop with this interesting setup. It made things even more difficult by recently adding a “hard mode” to the game. This lowers your stamina (crucial for combat) and it makes it so you can no longer spot the super-zombies on your minimap.

If you’re looking for to get truly terrified, that’s the mode for you.

It’s worth praising the way Techland has continued supporting Dying Light after release. In addition to the hard mode, which was a free update, the company also just patched the game on PlayStation 4 to improve the visuals. On top of that, the regular updates have included free items like new character outfits and general improvements.

I liked Dying Light before, but seeing the studio continue to improve upon what it released makes me happy.

The story stinks something fierce. I hate it. It doesn’t make any sense. Let me give you an example.

You play a character named Crane. He’s a double agent for some secret government agency. It has hired you to recover a file, but it also wants you to embed yourself among the survivors to get information from them.

The city you’re in, Haram, was hosting the Olympics (but not called the Olympics because naming rights are expensive). So you’re working with a band of athletes and other people from around the world to help save people because the city is cut off from the outside world except for occasional airdrops. But really you’re trying to get some file.

OK. Knowing all that, would you think anyone would care about money? Well, screw you because they do.

Dying Light has an entire sideplot where you go around for the bad guy (in an attempt to get closer to him) collecting mob-style protection money from people. And people are for some reason hesitant to give up their money … as if it matters. If they were asking for resources — like water or medicine — I’d get it. But no, the game has you collecting paper currency, and it’s so stupid.

That’s just one example of the terrible writing, and the rest of the game is on the same level.

Sometimes feels a bit too much like other triple-A games

Dying Light sure does feel a lot like Assassin’s Creed … and Far Cry. Oh, and it also feels like The Elder Scrolls role-playing games. It just gives me an occasional sensation of industry sameness.

I don’t want to slam the game too much for this because it didn’t bother me too much. But I did notice it.

When you’re climbing buildings and doing parkour, you can’t help but remember Assassin’s Creed. When you’re out looking for loot to craft a certain weapon, you’re gonna think of Far Cry. When you level up because you were jumping around like an idiot, I said, “Oh, just like Oblivion.”

I want certain things from my games these days. And on the PlayStation 4 and Xbox One — early in their lives — I want something that feels fresh. That’s not always Dying Light.

What a good game. It’s really good. It’s just so easy to pick up and get lost in for a few hours at a time. You can credit Techland for that success because it picked a few ideas and really got them right. The zombie-infested world is pretty and dangerous, and your character is fun to control. On top of that, the mechanics and the systems keep the core from getting boring.

This week, Techland revealed that has more than 3.2 million players. It deserves that.

Developer Techland provided GamesBeat with a digital copy of Dying Light on PS4 for the purposes of this review. It’s out now for PlayStation 4, Xbox One, and PC.