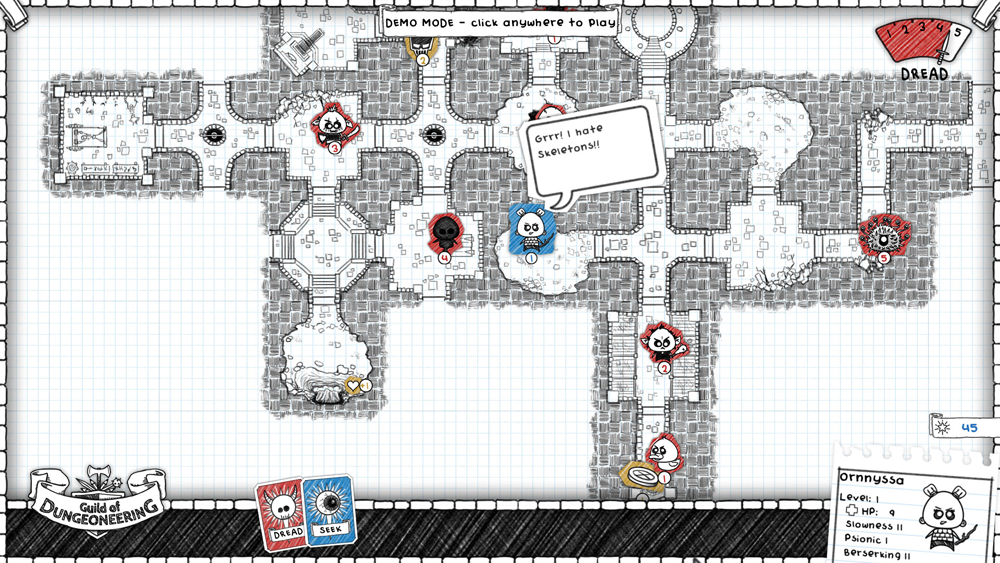 Above: Everyone’s geometry binder winds up with at least 20 pages that look like this…

Scribbling out death traps and monster pits on graph paper, rather than doing math homework, is something every kid that grew up to be a game developer can relate to. Irish developer Gambrinous is creating a card game roguelike around this pastime, where you not only get to play as a dungeon master but also as the hero traversing the catacombs.

Guild of Dungeoneering starts off with two rooms on a grid, a boss monster at one far end, and the entrance to the dungeon on the other side. The player is given two hands to play, one is geared towards construction. These cards are related to monsters, gold coins, and rooms to build. During this phase you want to intelligently lay out rooms and fill them with monsters that the hero can take on in order to level up. Since you can’t control which direction the hero will go, you can entice them down a certain path by laying down loot.

The second set of cards is for when the hero engages in battle with a creature. Depending on the type of character you’re leveling up, these cards contain abilities tied to either melee or magic.

Gambrinous has hit this play psychology middle-ground, where you are given all the devious tools to create a sick maze of death, yet you want to craft the environment only deadly enough so the hero faces obstacles at a good pace. It’s clever as hell. Above: Not everything can be solved with rocket jumping, young man.

Tinertia is a side-scrolling platformer where you play as a robot who can’t jump by normal means. In order to move from ledge to ledge, the character has to rocket jump across obstacles.

Rocket jumping is a technique players developed in arena style first-person shooters, Quake specifically, where a player fires an explosive projectile towards the ground just after the first few frames of performing a jump. The explosion releases splash damage, which allows the player to ride a wave of inertia, adding height to the jump.

I love Tinertia’s concept of taking what was originally an unintentioned feature of one genre and make it the focus of another game’s design.

Currently, however, the idea isn’t perfect. Out of all the games on this list, at times Tinertia had me wanting to throw the controller through a wall. The hang up is in the controls. The left thumb stick manipulates which direction the robot will go in, where flicking the right thumb stick fires a rocket. This means in order to rocket jump in a specific direction, the left stick must be pointing in the direction you want to go, and the right stick must be flicked the opposite direction (since you want a rocket to explode behind you, to push you forward). At its worst it felt like my brain was being pulled in half.

My advice is to add an alternate control scheme where firing a rocket is bound to a trigger or bumper. Players like myself will still have to point the sticks in opposite directions, but it gives us a couple milliseconds of mental prep when aiming before firing. 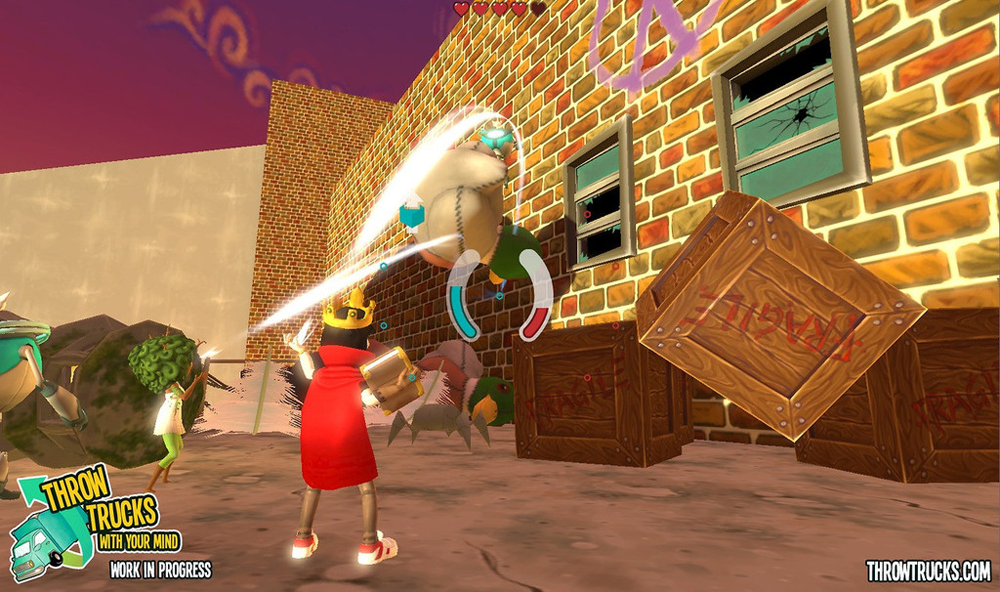 Above: There’s a Scanners joke begging to be made

Throw Trucks With Your Mind

Throw Trucks With Your Mind was one of the stranger entries in this year’s Indie Megabooth. The build at the show was a first-person sandbox experience where, using special powers, players can lift, pull, and push objects.

The crazy part is that the game is literally using the power of the mind to perform these in-game feats.

At first glance this comes off as a cool novelty: a gimmicky prototype that is taking advantage of an otherwise obscure piece of tech. But consider the implications of detecting brain activity in the world of Virtual Reality? Being able to detect a user’s anxiousness during a game coule lead to some pretty powerful, and manipulative, experiences.

Compared to other indie developers at the show, Lat Ware may be way ahead of the curve with this one. 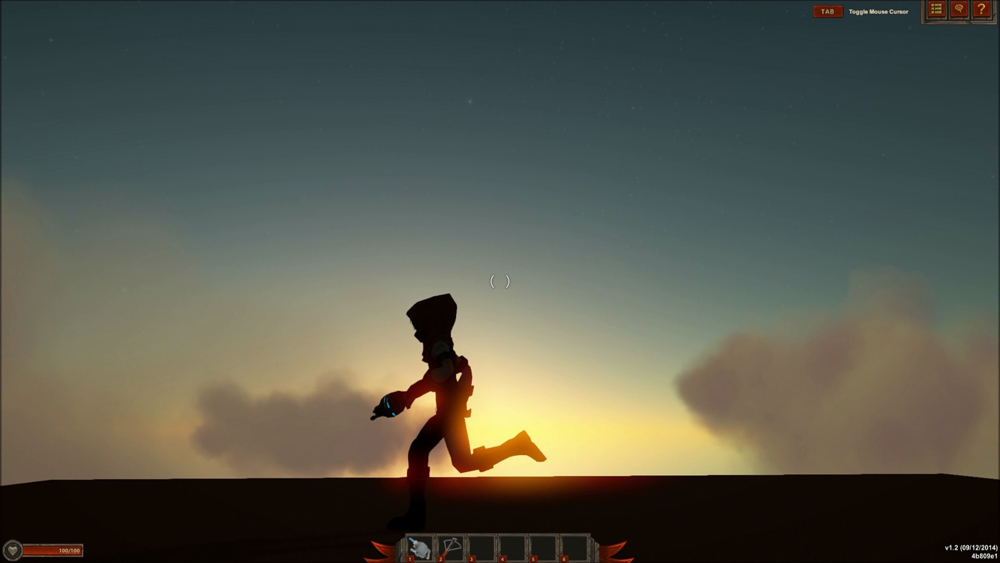 Above: Crap! I’m telling you that I parked the air ship over here. I know! I’m hitting the damned lock button on my keys. Quit asking! I can’t hear the ship beeping.

Worlds Adrift is a massive open world sandbox game by the creators of Surgeon Simulator and I Am Bread. Players will take residence on small floating islands on a gigantic fantasy planet, where they will be able to mine for resources and eventually craft various vehicle parts. Such as a propeller engine, steering wheels, rutters, etc.

These items can then be formed together to build an airship. The ships, however, don’t have to follow a predetermined build. Hell, the parts themselves don’t have to be used for air ships at all (although getting around is easier that way).

The entire experience is being designed to be loose and arbitrary. Like other crafting games before it (Minecraft), the player is free to do whatever the hell they want within the world’s very open confines.

If someone wants to try and break the world by building a giant wall of air ship engines to see what happens, they can. If somebody wants to play air pirate and command a crew on a massive ship, go for it.

The thing I find most interesting about this project is simply that Bossa Studios is doing it. These guys have created two games that touch on the absurdity of the tech we use in this industry. Something like Surgeon Simulator takes those unintentionally comedic moments, where a game engine is making a human puppet do something impractical and bizarre from our perspective, yet totally logical from the machine’s point of view, and captured those moments for us to relive forever.

So it’s intriguing to see a group that has mastered containing these events into small experiences widening the barriers with an open-world sandbox concept like this. Above: Not everything can be solved with quantum physics, either, my son.

What happens when you lock a cat inside of a box with a radioactive atom? Well, as the theory goes, the cat is in a state of being both dead and alive. At least, until we open the box and force nature’s hand.

According to Italic Pig, our poor cat is not dead at all, but in another dimension cleaning up a zoo in the Quantum Polyverse.

Now, technically, this game released last year on Steam. I’m bringing it up here because it’s getting an update and a console release later this year. And, well, look…it’s not often that I see an educational game that can teach me about quantum physics.

All of the platforming abilities that Schrodinger’s Cat can use to traverse the universe are tied to a quark system, based off of the behavior of real life quarks in physics (up, down, top, bottom). Mixing different types of quarks together will create helpful items, such as a platform or a device that will allow the cat to float for a few seconds. Intelligent mixing of quarks is required in order to pass every obstacle.

Any game that can get me to even remotely understand what a quark is without putting me to sleep is worth checking out.

Bonus: Games I wanted to play but couldn’t… 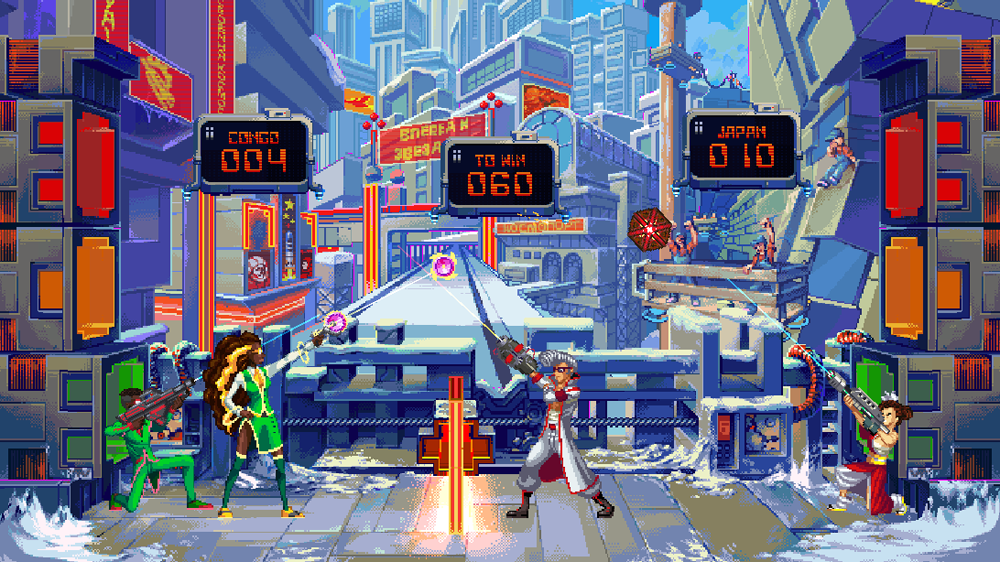 There is no war. There are no Gods. There is only the game.

Brandon Sheffield, formerly of Gamasutra and currently of Insert Credit, has been peppering Twitter about his latest project: Gunsport. It’s a 16-bit homage of late ’80s to early ’90s Japanese sci-fi, where athletes compete in a hybrid version of volleyball involving fire arms. Which makes it the most American idea on this entire list.

I was able to watch a couple of people play a match near the entrance of the show, but getting some hands-on just didn’t happen. Maybe I’ll get my chance soon?

No Pineapple Left Behind

Above: Pineapple. Children. Is there really a difference? Just keep passing these damned tests.

A public school principal simulator where children have been transformed into pineapples. Supposedly, pineapples are easier to deal with than little kids. They pass tests and don’t cause trouble. As a father, I agree. But can a pineapple hug you with its little leaves? I think not!

I love what I am seeing so far. If there is anything deserving of satirical venom, it’s the no child left behind program and the abysmal state of our public schools. I mean, look at me! I’m a product of our public school system, and I’m so dumb that I couldn’t locate this game on the show floor!