Ten-year-old Donovan Romero-Brathwaite has quite an imagination, and he has applied it to designing his first video game, a whimsical title called Gunman Taco Truck.

If he was like most kids, his vision might have ended with a pat on the back after he told his parents his idea. But his folks are legendary game designers Brenda Romero, who worked on Wizardry, and John Romero, one of the people behind Doom. Games are the family business. 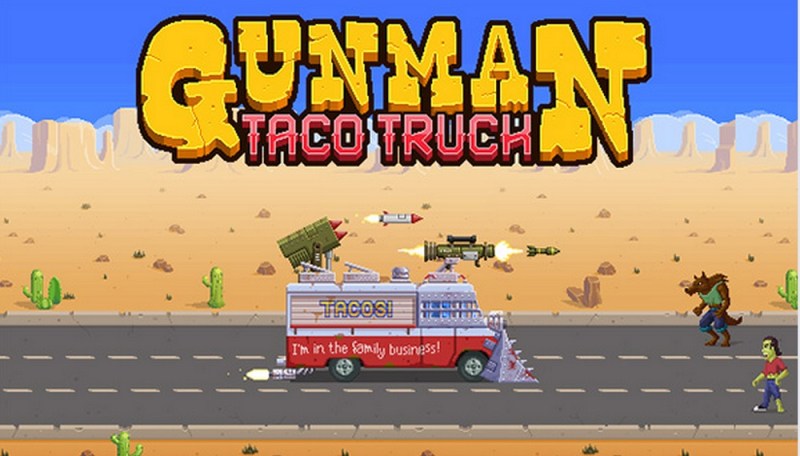 Donovan came up with the idea during a coding lesson with his stepfather, John. His mother, Brenda, used her smartphone to record Donovan describing his idea. Then, she posted the video on Facebook, in which Donovan rocks back and forth with excitement as he talks about the plot of Gunman Taco Truck, which involves a heavily armored and weaponized taco truck.

Brenda said in an interview with GamesBeat, “Within a short matter of time, a bunch of game developers were saying, ‘Well, you’re going to make it aren’t you?'”

They decided to do it and assembled a team of six people, made up of family and friends. Donovan’s sisters are testing the game. His brother Michael is helping, as are his parents. A few friends — Paul Conway, Dren McDonald, and Ian Dunbar — are rounding out the work on the art and other details. 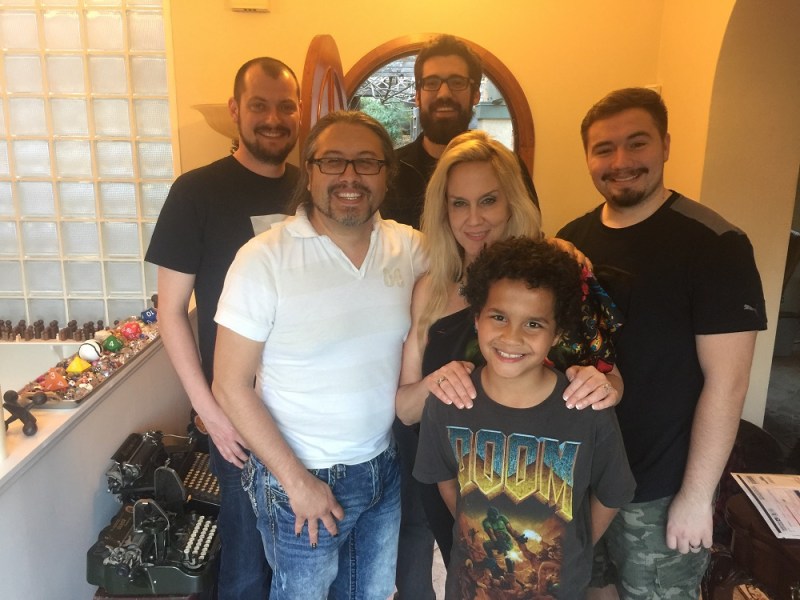 “We’ve got more people on this than most indie games,” John said in an interview.

They’ve made enough progress to put the game up for pre-order on the Humble Store, which devotes 10 percent of proceeds to charity.

The title’s story is set after an apocalypse, where a scientist accidentally set off seven atomic bombs and wiped out most of the population. The “last Mexican in the U.S.” is one of the people left standing. A bunch of mutant creatures have emerged and are attacking the survivors. The taco truck driver tries to feed those who are still alive, but he has to heavily arm his taco truck in order to deal with the mutants.

“Your goal is to get the taco truck to Canada,” Donovan told me. 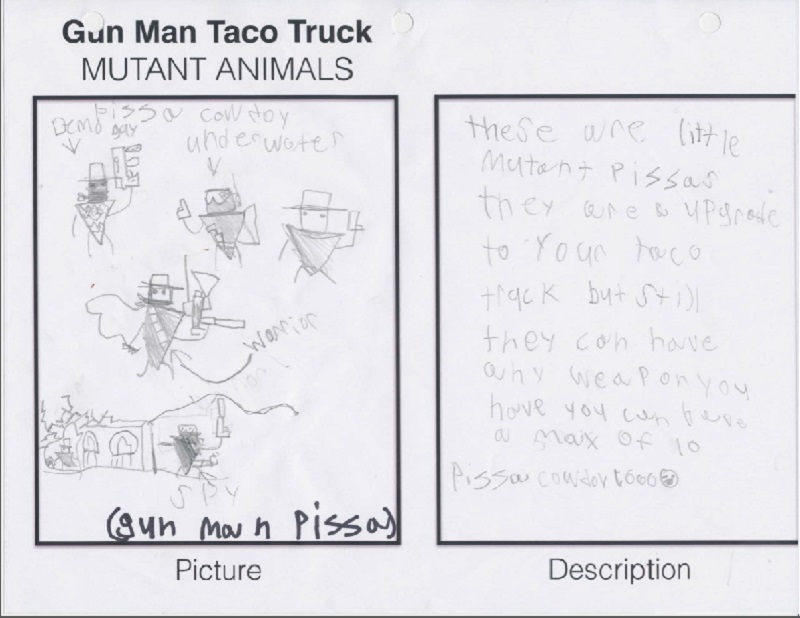 Above: A page from the design doc for Gunman Taco Truck.

Donovan got the idea last summer. With help from his stepdad, he created a design document. It described the plot and had drawings of the artwork. It also outlined weapons, creatures, and locations. He completed the document in November, and development began in December using the Corona software development kit.

“We’re fortunate that we have family and friends to take advantage of his idea and make it a reality,” Brenda said. “He has a good environment. He [is surrounded] by games all of the time. He’s probably at a stage of skill now where I was in my early 20s.” 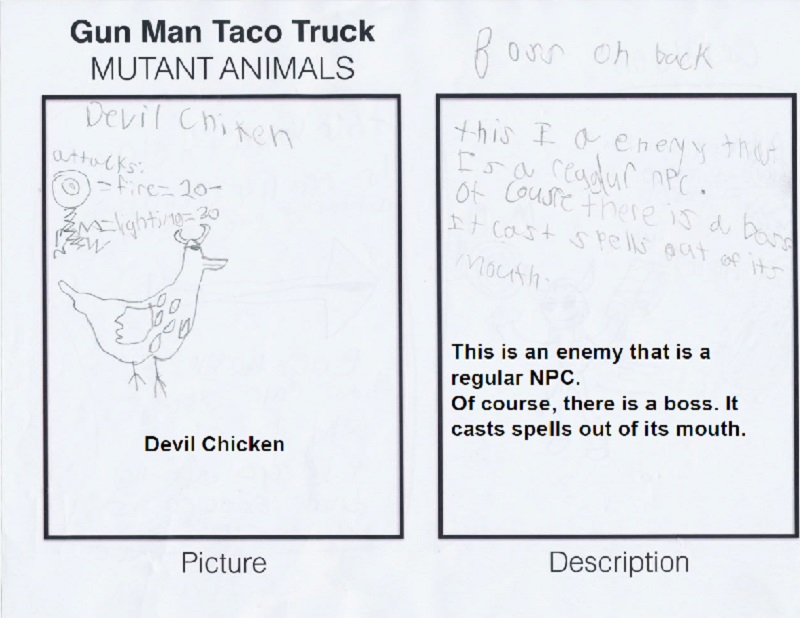 Above: More from the Gunman Taco Truck design doc.

The Romeros got an artist to start working on the imagery. While all of the design is Donovan’s, Brenda is working on balancing the game. Players will experience 40 locations and a bunch of monsters, including a devil chicken (who clearly doesn’t want to be part of a taco). The chicken shoots “dark matter” from its beak and lasers from its eyes.

“The final draft of the design is absolutely ridiculous,” Brenda said. 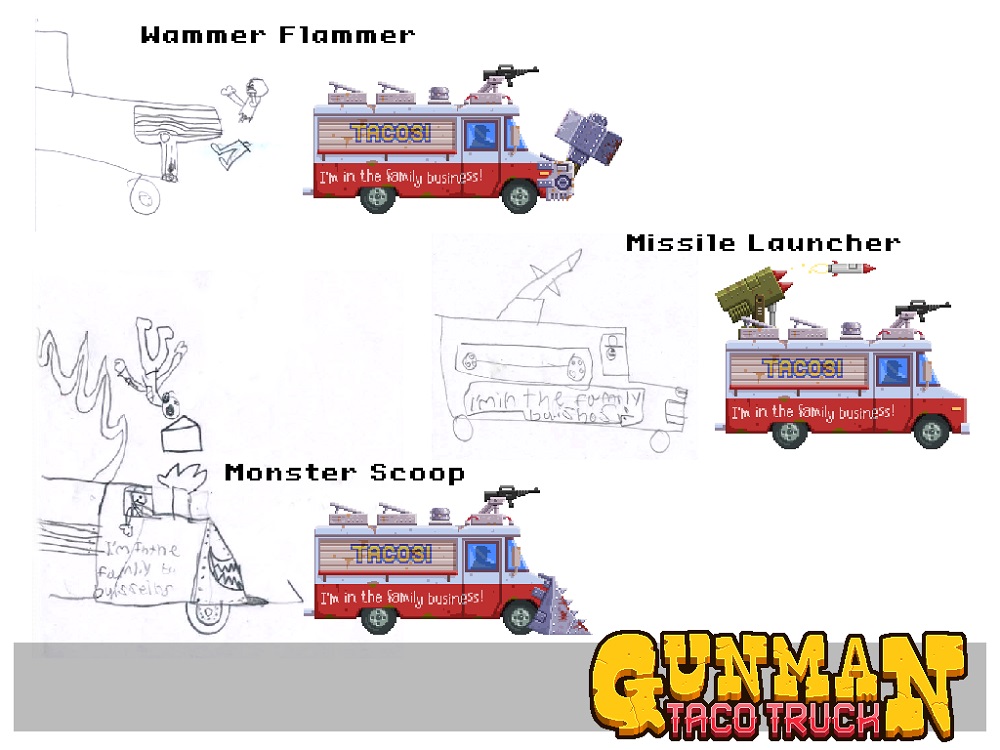 The team completed an alpha version, which is ready for testing. Donovan did the coding for the introduction screens. He’s learning about game-development milestones and how to work with the family as a team.

They are hoping for a June release on iOS. John said he met with Apple, and the company was excited about it. Any proceeds will go toward Donovan’s college fund, and the title will ship with his hand-drawn design doc.

Donovan said his creative side comes from the games he plays or watches. He was inspired to see his mother win an award at the recent Game Developers Conference (GDC) in San Francisco. In front of a crowd of thousands, she accepted the honors for the Ambassador Award. Donovan wants to return to the GDC and win an award himself one day.

“He wanted to be a game developer since he was maybe seven,” Brenda said. “But we thought he had to master reading first. We thought it would be a great exercise to learn coding and design a game while doing that.” 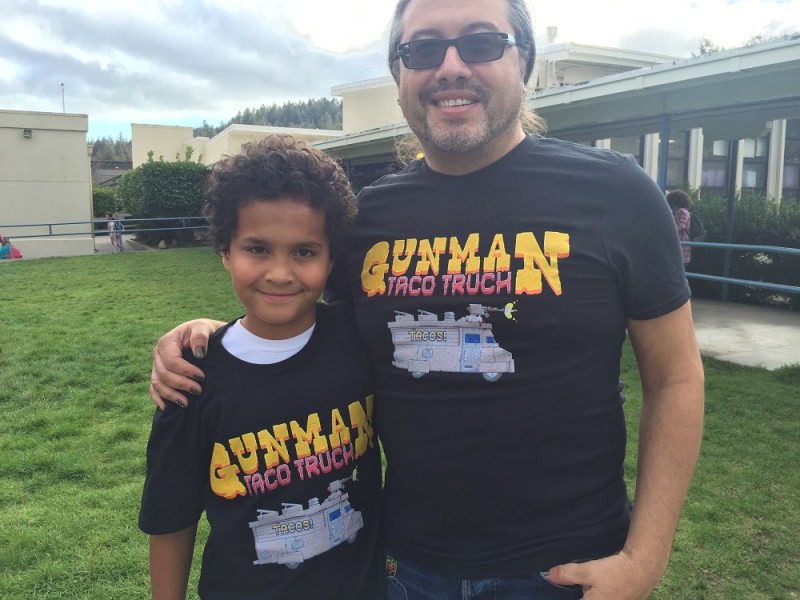