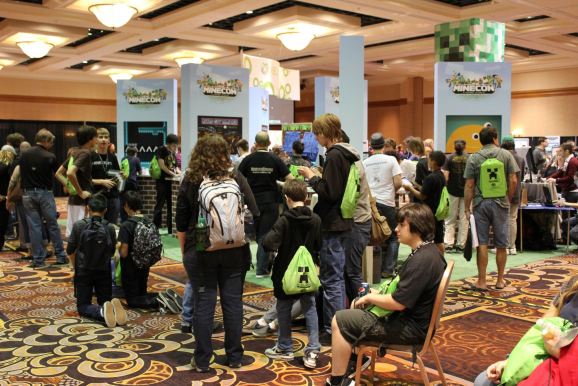 Minecon is a chance for Microsoft to run its own dedicated gaming convention -- but this is still Mojang's show.

Fans of Minecraft will once again gather in one place to celebrate the brick-building phenomenon. Only this is the first time Microsoft will attend as the new owner of the block-building blockbuster.

Minecon, the Minecraft convention, takes place at London’s ExCel Convention Center July 4 and July 5, and Microsoft is promising not to screw it up. The Xbox company is obviously invested in keeping Minecraft fans happy, and that extends to ensuring the convention is still a great time for all attendees. We asked Microsoft if it had any plans to change Minecon now that it’s writing the checks, and it confirmed that it’s going to let Mojang do its thing.

“Mojang is running Minecon 2015 in the same manner as their past events,” a Microsoft spokesperson told GamesBeat. “We’re playing a supporting role; we want to listen, learn, and be inspired by the community that has made Minecraft great.”

The news that Minecon is back is something of a relief for megafans of the game who were worried that things might change with Microsoft in charge. In September, Microsoft purchased Minecraft and developer Mojang for $2.5 billion. The company promised to continue supporting the game in all of its versions, but fans still worried.

But so far, Microsoft has held true to its word. The PlayStation version of Minecraft, on Sony’s competing platform, got new downloadable content today.

Keeping Minecraft fans happy — even if they’re on PlayStation — is incredibly important to Microsoft. The game is one of the most played in the world, and it is especially popular among young people. Many consider it Super Mario Bros. for the generation that is growing up now, and the franchise could serve as the backbone of Microsoft’s gaming strategy for the next decade and beyond.

Minecon is one of the places that strategy will take shape.

As with previous the previous official Minecraft conventions, this event will last for two days. It features panels, exhibitions, and other attractions for fans.

“It’s a great place to meet and greet fellow Minecrafters and some high-profile YouTubers as well as your favorite Mojangstas,” said Microsoft’s spokesperson. “Mojang is planning some new surprises, but attendees can expect the same great experience and authentic Minecon experience as past events.”

It’s important Microsoft not to disturb Minecraft, Mojang, or Minecon. The company didn’t spend $2.5 billion just to muck things up. It wants the magic the franchise has created so far to continue for years.

That means that Microsoft will help out with things when asked by Mojang, but it does not plan to interject itself where it is not needed.

“We’re extremely thankful for our passionate community of players, builders, and content creators who have made Minecraft the global phenomenon it is today,” Microsoft’s spokesperson continued. “It was important to us to help where needed but let Mojang carry on the tradition of Minecon as a meaningful celebration of the Minecraft community.”

Finally, Microsoft said it never hesitated to permit a new Minecon. It knew that was part of what it was buying. Microsoft has never really had a regular gaming convention for any of its other properties before, so this is something that it could build on for the future.