Hashtags. Now ubiquitous and mainstream, they allow us to group conversations, ride on the wave of global trends, and express our lives in new (and sometimes socially awkward) ways.

But for marketers, working out how to use hashtags effectively has always been an issue.

While some organizations are big enough to be trend creators (with mixed results), most businesses and individuals have to work out which hashtag is the right one to include in a tweet, and where to include it. For that reason, the past three years has seen a number of hashtag analysis and optimization solutions, such as RiteTag, come to the aid of marketers and social savvy tweeters alike.

But hashtag optimization isn’t the only burning Twitter marketing issue.

Today, RiteTag has announced that it has acquired ScrapeLogo for an undisclosed sum. The acquisition is part of RiteTag’s roadmap to optimize every aspect of social media marketing.

RiteTag is available in your Chrome browser (via an extension) and via integration with popular social media management tools, such as Hootsuite and TweetDeck. Simply put, it analyzes the hashtags you’re about to use. It scores them and suggests alternatives and additions to help your tweet reach a wider audience.

I talked with RiteTag founder Saul Fleischman about the acquisition and the wider issues he is trying to solve.

In research conducted by Buffer, tweets that include images were shown to increase retweets by 150 percent. Prior analysis from data scientists such as Douglas Mason and Dan Zarrella show similar bumps in engagement, retweets, and favorites when an image is included.

“We all know visuals are important, but do you have one handy, or the time to make one? In addition to rating hashtags and suggesting alternatives, we will now provide the ability to add an image to a tweet in an instant via RiteTag,” Fleischman said

I’ve seen RiteTag performing this new function within TweetDeck, and it couldn’t be easier. One click serves up a filmstrip of images to choose from, and the user selects the image they want to add to the tweet. The entire process takes a few seconds. 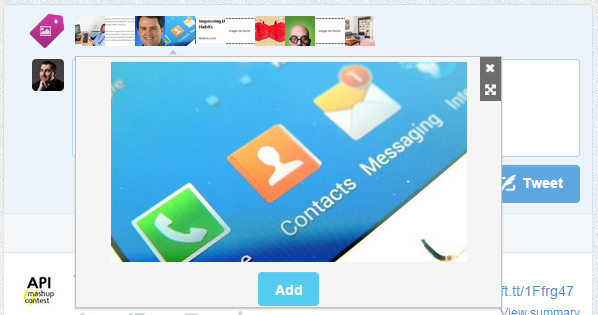 So what is it that ScrapeLogo offer RiteTag? Why acquire the technology, and the team?

“ScrapeLogo has excellent fuzzy logic that allows us to grab deeply relevant images,” Fleischman said. “Right now it grabs corporate logos from domain names, with a high level of accuracy and certainty, but its matching technology is going to help us take our image selection system to the next level.”

Other than images, there is the ongoing issue of timing your tweet for best effect. Some tools provide rudimentary scheduling based on nothing but a list of times or rules. Others measure when your followers are most likely to be online and reading tweets, then optimize delivery at those times. If RiteTag’s mission is to optimize everything, how does tweet scheduling fit into its future plans?

“We will offer more choices for our auto-schedule settings in 2016, but for now, we suggest that people consider the actual value of tweet timing,” Fleischman said. “In this paper, Eric Enge of Stone Temple says that ‘this is one of the most popular myths about Twitter — that there is a best time of day to tweet’.”

It is a good point to make, but there are algorithmic tweet timing solutions that do an excellent job of scheduled tweets. Of course, the quest to ensure your tweet is read and acted upon doesn’t just come down to quality of content, an image, and a good time to tweet.

“What we want to do is make it easy and automatic for RiteTaggers to ride trend spikes and send tweets and Facebook updates that include hashtags, at the exact time when those hashtags are garnering the most reception,” Fleischman said.

RiteTag doesn’t just offer alternate hashtags and color-coded feedback on the effectiveness of your chosen hashtag.

“To help users quickly optimize their Facebook updates and Tweets, right where they post, the Coach feature rides in Facebook, Twitter, Tweetdeck, Hootsuite, Buffer, and SproutSocial,” Fleischman said. What it means is plain-English advice on why you are seeing a “flag” against your tweet, and what to do about it. 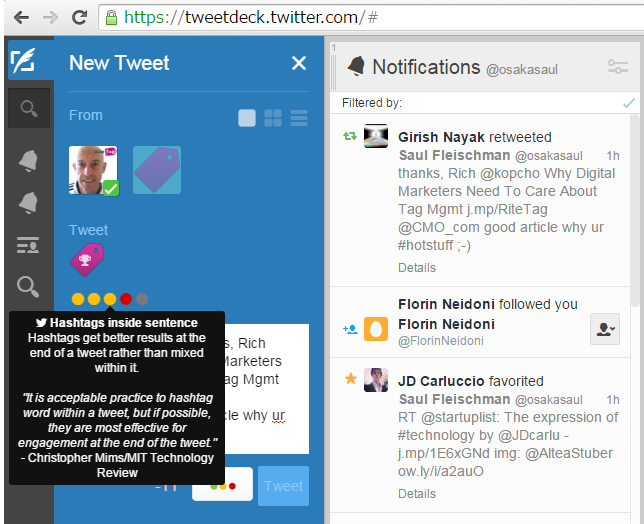 Above: RiteTag Coach in action

Knowing which hashtags are “good” is great, but what is RiteTag doing to guard against brands leveraging an inappropriate hashtag?

“Our proprietary hashtag grading system includes color-coded indication of overused tags,” Fleischman said. “Use these hashtags and you’ll have little to no chance of getting found from search, those clicking hashtags, or those curating from hashtags because the competition is too great.”

That doesn’t solve the exact problem highlighted by a few recent incidents, so savvy marketers should still make judicious use of hashtag directories and definition sites to ensure they understand the story behind a tag.

In optimizing hashtags for Twitter and Facebook, and allowing the easy addition of images to social updates, RiteTag provides a simple solution to a problem many marketers struggle with. By acquiring ScrapeLogo, it hopes to vastly improve that feature and take its image matching technology to the next level, with full social media message optimization on the horizon.

The ScrapeLogo service will continue for current customers, who rely on it for displaying the logos of their users’ domains as well as brands that their users refer to. All current staff are being retained, and join the team at RiteTag.