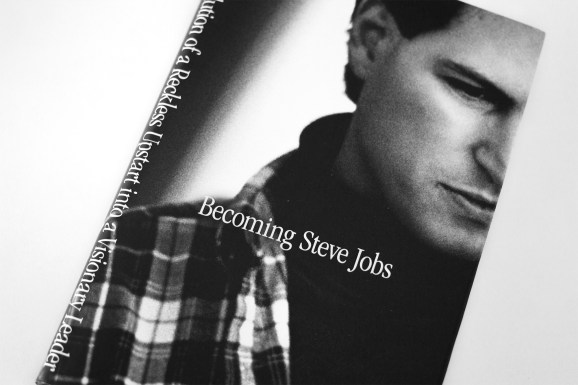 Something struck me after reading “Becoming Steve Jobs.”

It wasn’t the fresh take on Jobs’ time at NeXT and Pixar. It wasn’t the grudges he held, or the various revelations, which made headlines before the book’s release.

No, it was the near omission of one of Steve Jobs’ most trademark qualities: his reality distortion field — a term coined to describe how Jobs could seemingly spin “his own version of reality” and make you believe it.

In “Steve Jobs” — the 2011 book by Jobs’ official biographer, Walter Isaacson — the term comes up an astounding 34 times. In “Becoming Steve Jobs,” an unofficial biography, it’s brought up once and dismissed before chapter one [emphasis ours].

After Steve Died, reams of armchair analysis unfurled … Often they resurrected old myths about Steve, using stereotypes that had been created way back in the 1980s, when the press discovered the wunderkind from Cupertino. In those early years, Steve was susceptible to the flattery of the press, and he opened himself and his company to reporters. He was at his most undisciplined and most intemperate then … Perhaps that’s why the posthumous coverage reflected these stereotypes: Steve was a genius with a flair for design, a shaman whose storytelling power could generate something magical and maleficent called a “reality distortion field”; he was a pompous jerk who disregarded everyone else in his single-minded pursuit of perfection; he thought he was smarter than anyone else, never listened to advice, and was an unchanging half-genius, half-asshole from birth. None of this gibed with my experience of Steve…

But this dismissal struck me as strange. The farther I read, the more it seemed that the authors themselves may not believe it. For example, in the way they recounted Jobs’ pitch for NeXT:

It sounded good. But much of it was chutzpah and self-delusion. When he started Apple, he had not presumed that he knew how to run a business — he was willing to rely, at least for a while, on his mentors and bosses. Now, he acted as if he knew everything…

Managing Steve’s finances when he had little fiscal discipline and no checks on his spendthrift ways had grown wearying. “It was classic: his visionary optimism versus my reality,” says Barnes.

Jobs’ distortion field — by many accounts — was very real, and defined many of his relationships at Apple, NeXT, and maybe even Pixar. But, Schlender and Tetzeli may be right to avoid overusing this term. Maybe it undercuts Jobs’ dynamic personality, which features highs and lows like everybody else. Maybe it misconstrues marketing savvy for malevolent manipulation.

Or maybe sources at Apple willed their own reality distortion field, seeking to discredit the term before it’s permanently ingrained in history.

In any event, “Becoming Steve Jobs” is worth a look, and you can read our overview of the biography here.