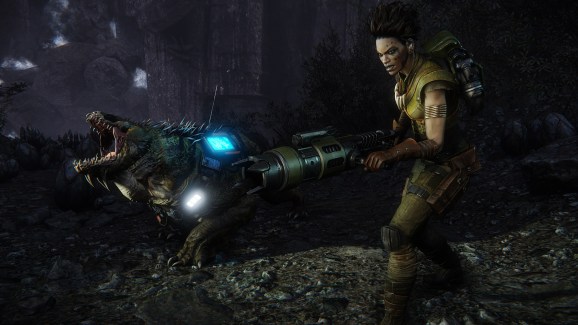 One of the characters from Evolve.

It’s a bunch of older releases that are making the most from digital sales on consoles.

Familiar games franchises like Call of Duty and Grand Theft Auto topped the sales chart in February for digital revenue, according to intelligence firm SuperData Research. The only new games to make the list were 2K’s asymmetric online shooter Evolve and Sony’s action game, The Order: 1886, but both performed worse than January’s breakout horror hit Dying Light. Digital sales for both full games and downloadable add-on content is making up a bigger piece of total revenue for publishers on the PlayStation 4 and Xbox One. And many developers are launching their games with the hopes of piling on a significant amount of extra cash with in-game purchases from a console market that is generating around $50 billion in total sales worldwide.

In total, digital console games made $233 million in February. That’s down 3.7 percent from January, according to SuperData chief executive Joost van Dreunen. The analyst explains that is typical as January still gets a decent amount of runoff from holiday spending.

Of course, the most interesting story in terms of the games on this list is Evolve. It launched Feb. 11 with quite a lot of downloadable add-on content. SuperData points out that 2K sold around 192,000 digital copies of Evolve, which made up the majority of the shooter’s digital income. But the publisher definitely tried to juice Evolve’s digital revenues. The game has tons of character packs, a new monster you can buy, and skin packs that change the looks of the existing roster. In total, you could spend around $60 to $75 on this stuff beyond the base game and even its season pass, which will unlock extra maps.

But all that DLC hasn’t helped Evolve — at least not yet.

“Despite the initial hype, the high price points for items and upgrades in Evolve’s in-game store proved overly optimistic,” said van Dreunen. “Time will tell if this has negatively affected the game’s ability to retain players on the long term.”

At the time of Evolve’s launch, gamers were certainly complaining about the amount of downloadable content that wasn’t included with the purchase price. This prompted Turtle Rock Studios cofounder Phi Robb to come out in defense of the practice.

“A lot of folks seem to be under the impression that we’ve got all this content done and we shave off a hunk to sell separately,” he wrote on his site’s forum. “That just isn’t the case. When Evolve hits the shelves, none of the DLC will be done. Behemoth won’t be done. None of the planned DLC hunters or monsters will be done. The only exception to this might be some skins that were working on now while we wait for all the final stages of packaging, manufacturing etc. to finish.”

Regardless of whether the DLC was done or not, it seemed like many gamers were left with a bad impression thanks to what they perceived as a developer trying to squeeze them for every last little bit of revenue.

Compare that to Dying Light, which launched with much less hype and no controversy about DLC. It made 13 percent more in digital revenue in February than January. This was likely due to positive word of mouth as well as developer Techland’s multiple free updates to improve and add to the game.

2K Games and its parent company Take-Two Interactive positioned Evolve as one of its big releases of 2015, one that would fill the gap of not having anything new from Rockstar. Now, it’s looking more like a cautionary tale for developers wondering how to approach digital on the PS4 and Xbox One.