Updated 3/31 to reflect the correct ownership of the Project M screenshot.

If EverQuest’s designers hadn’t come to their senses, the massively multiplayer online RPG might have included diarrhea-like fields, an evil muffin zone, and player-controlled monsters that could stalk you inside “safe” cities.

In honor of the groundbreaking game’s 16th anniversary this month, we asked three longtime staff at what is now called Daybreak Games (formerly Sony Entertainment Online) to tell us about the worst things that never quite made it into EQ: Holly Longdale, executive producer of EverQuest and EverQuest II; Jonathan Caraker, lead designer for EverQuest; and Alan VanCouvering, assistant lead designer for EverQuest.

(For an anniversary Easter egg with a pet reward, see the end of this story.) 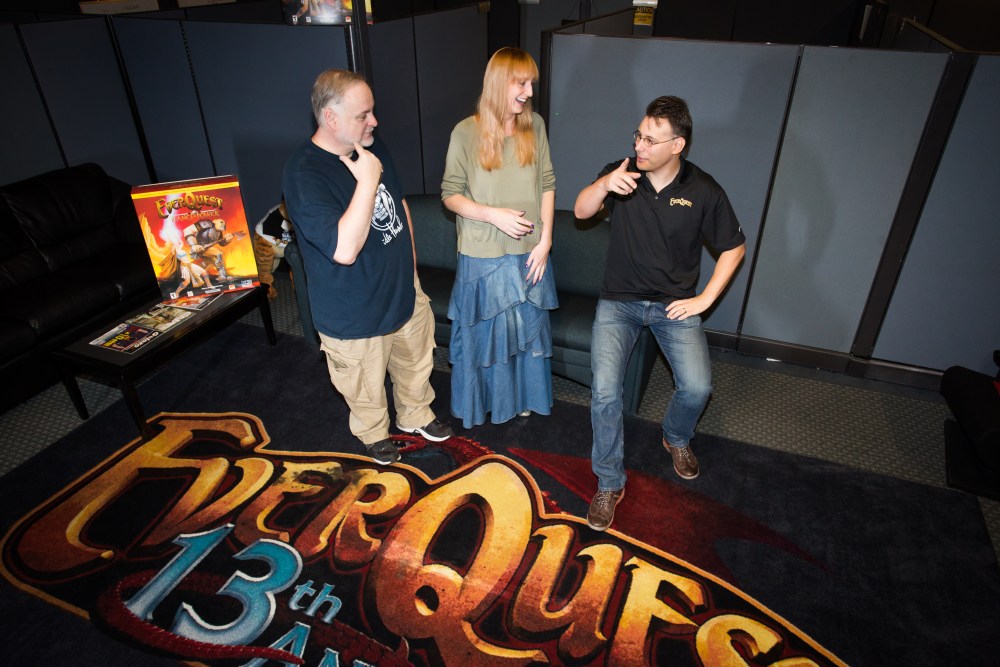 Above: From left: Alan VanCouvering, Holly Longdale, and Jonathan Caraker.

These terrible, horrible, wonderful EverQuest game ideas sometimes made it into testing and even into the hands of players, but they didn’t make it to the live game – or if they did, they disappeared quickly.

Many concepts didn’t make it out of the “very honest” design meetings, Longdale said. “There was a lot of, ‘What a terrible idea.’ That’s the brainstorming process.”

But sometimes, they got a lot further before getting trashed.

“When something sucks, we don’t force it. We adjust,” she said.

One example is Project M, for Monster, a major initiative that made it all the way to the test servers. In fall of 2001, you could log into those servers and choose to be either your normal character or a monster – some kind of hostile creature that already existed in EverQuest.

If you chose to be a monster, you had some pretty severe limitations. You could level up, but you lost everything if you died. You couldn’t move to other zones. 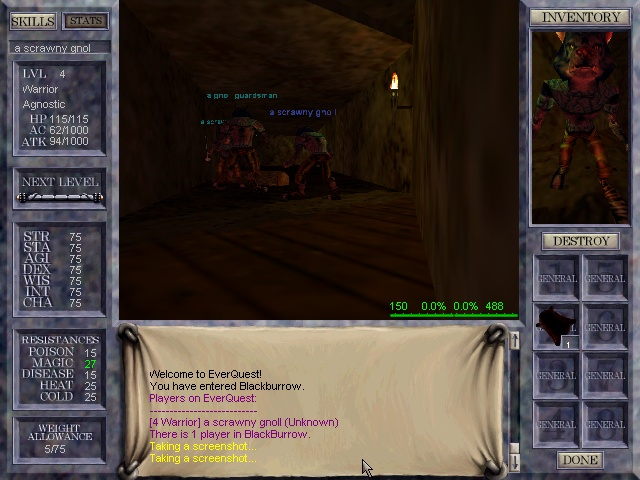 Above: We’re sure Ben Esacove, the player who provided this image, never terrorized anyone.

(Longdale laughed. “It was gangs of fire beetles.”)

The setup caused two problems: It introduced nonconsensual player-vs.-player combat to what previously wasn’t such a zone, Caraker said. And people, as it turns out, are smarter than NPC monsters.

“As a player controlling a monster, you can attack when people are [away from their keyboards], when people think they’re safe,” he said. “It definitely made a splash.”

Still, the company had put so much development time into the system that it made it a couple of months on the test servers before it was finally shut down. Everything but the rewards had been built into the system; it was nearly ready for prime time.

Now, Caraker said, “I assume that code is gone. Or commented out somewhere.”

All three of our interviewees were players, not developers in the game, at the time.

“What a terrible idea,” Longdale said. “The team moved into the shroud system, which was very different but allowed you to be a creature but without being super-sucky.”

Squishfaceofsaryrn‘s tutorial video on shrouds, which allow your player to look like someone else (delicate readers may be offended by spelling):

Why we’re still waiting on the clock

Some of EverQuest’s worst “oopsies” affected entire zones. They would design quests and place NPCs, and then developers would realize their creations were doomed.

Take the giant clock. “We had a while ago this zone idea that we’d like to do,” VanCouvering said.

Basically, after building up a zone, you’d discover a clock in the center of it. Things you did in the zone would move up or move back the clock for everyone. Kill someone; move it up. Complete a task; move it back. At the end of the hour, the zone would completely change, and new tasks would appear.

They’ve been working on that one, VanCouvering said, for eight or nine years now.

“It’s a lot of effort and we still haven’t figured out how to script all that,” he said. Longdale pointed out to him that the zone might be another place where players could grief each other by controlling the time.

“It’s OK,” he replied. “They couldn’t actually hurt each other.”

But that doesn’t mean it’s getting done. It’s really tricky having tasks run across all those versions of the same zone, VanCouvering admits. 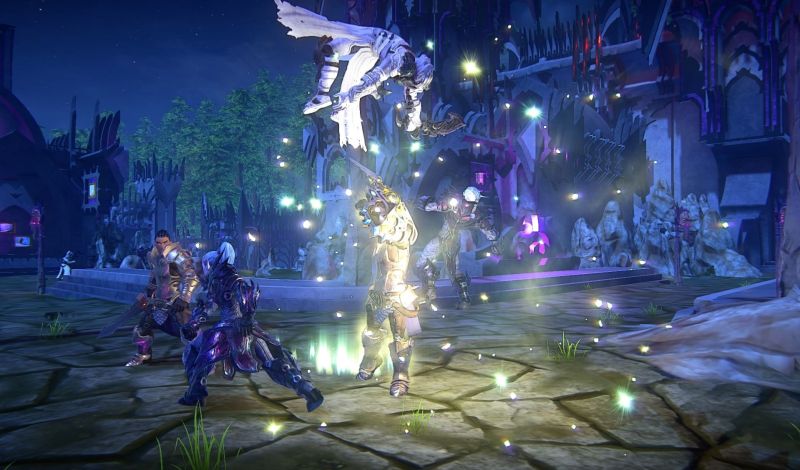 Above: Instead, you’ll get lovely zones like this one in the upcoming EverQuest: Next.

Even zones that made it into EverQuest sometimes changed dramatically along the way.

Originally, the Plane of Music was supposed to be a happy place, Caraker said. It was a cheerful land, with everyone peaceful, “singing and frolicking,” he said. But once they built it, they realized it wouldn’t be any fun to play in.

“We went with something much darker,” he said.

They allowed one of the demigods to take it over, a vampire. “Everything was corrupted, and you could kill it and get loot.”

That change was one of Longdale’s favorites: She’s actually the voice actress for the vampire. “I did the off-key opera singing.” 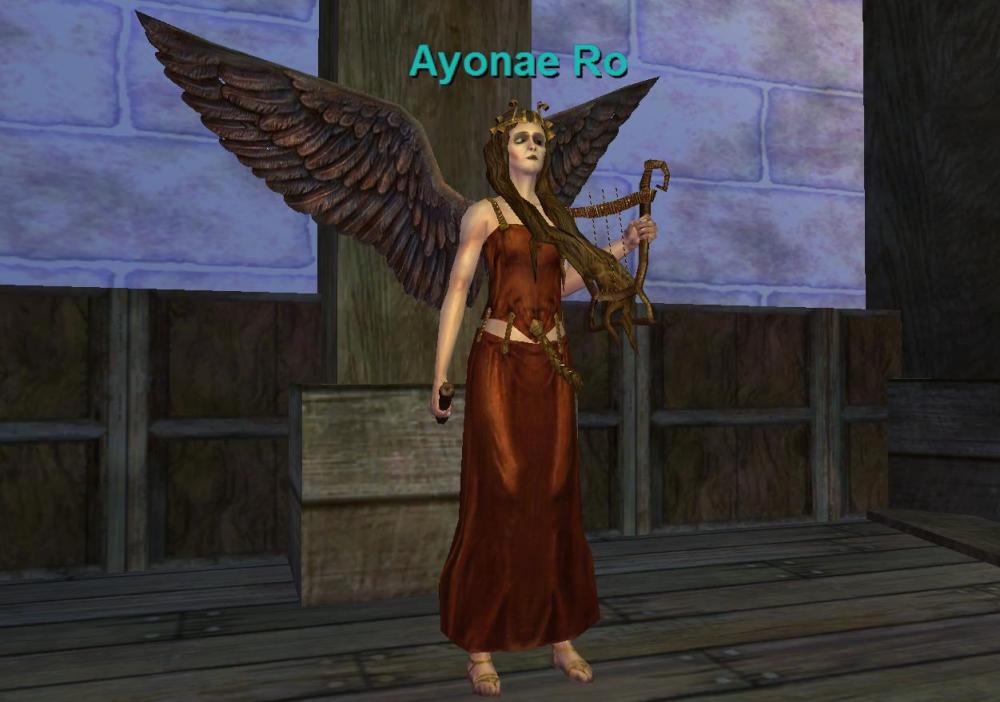 ‘It ended up looking like a field of diarrhea’

Longdale said she had issues with a zone of her own, one that turned out “epicly bad.” The concept was a barren, evil landscape, with twisted, veiny trees and a dark, inky, swirling ground that changed beneath you. It would eventually be mostly trashed and recreated as the Bloodfields.

“It sounded conceptually awesome at first,” she said. They were inspired by Barlow’s Inferno. “It didn’t come out anything like that. Sometimes what sounds good in your head absolutely does not translate. It was a disaster.”

When you make 3D assets of blood veins as trees, you get terrible-looking trees, it turns out. The ground didn’t fare much better.

“It ended up looking like a field of diarrhea that didn’t move, with weird, pink three-armed trees, and some of it was floating,” Longdale remembered.

VanCouvering agreed. “You wouldn’t want to be in there.” 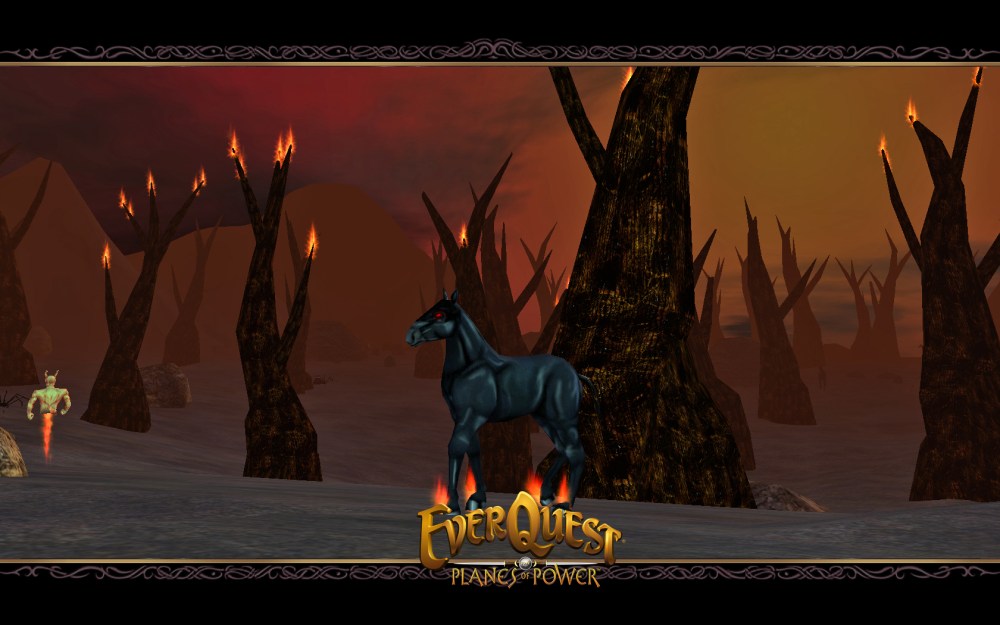 Above: Have some nice burning trees from the Plane of Fire’s Plains of Doomfire, instead.

No purple, and no ninjas

A producer at the time the Bloodfields were created had a vendetta against the color purple, Longdale said, which didn’t help matters for her failed zone.

“They were strong suggestions, or we’d be fired,” Longdale countered. “OK, he’d yell loudly. We took it seriously, because we had no purple.”

Also on the forbidden list: ninjas and firearms. That doesn’t mean designers and artists didn’t sneak them in.

“We did a pirate-themed expansion,” VanCouvering said. “If you looked really carefully in the back [on the box], there was a little tiny ninja back there.” 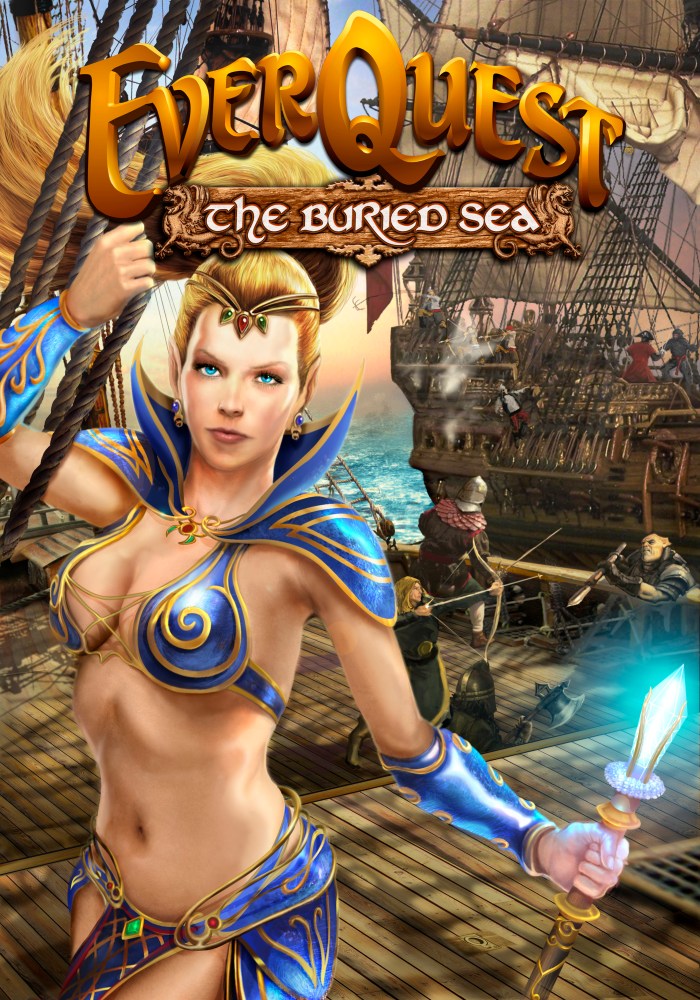 Above: Here there be ninjas — about halfway down on the far right side of this box art.

And along with the ninjas came guns.

“And any time you have pirates, there’s a cannon there,” Caraker said. But that wasn’t the most famous gun in the franchise, he said. That one is actually an homage to another game altogether.

“In 2000, in the Scars of Velious expansion, somebody put in a reference to the BFG from the Quake franchise,” Jonathan Caraker said. “They put in this quest, and you did a couple of things, and you got a weapon that used archery but it looked like a robotic arm that you wore.

“It was out of character, and it did some things in our game that weren’t good for the gameplay. When you would attack something, it would fly back across the zone. A huge swath of the zone would come back to where you are. It created crazy trains. Players have been asking for us to bring it back forever. We have said no for 15 years.” 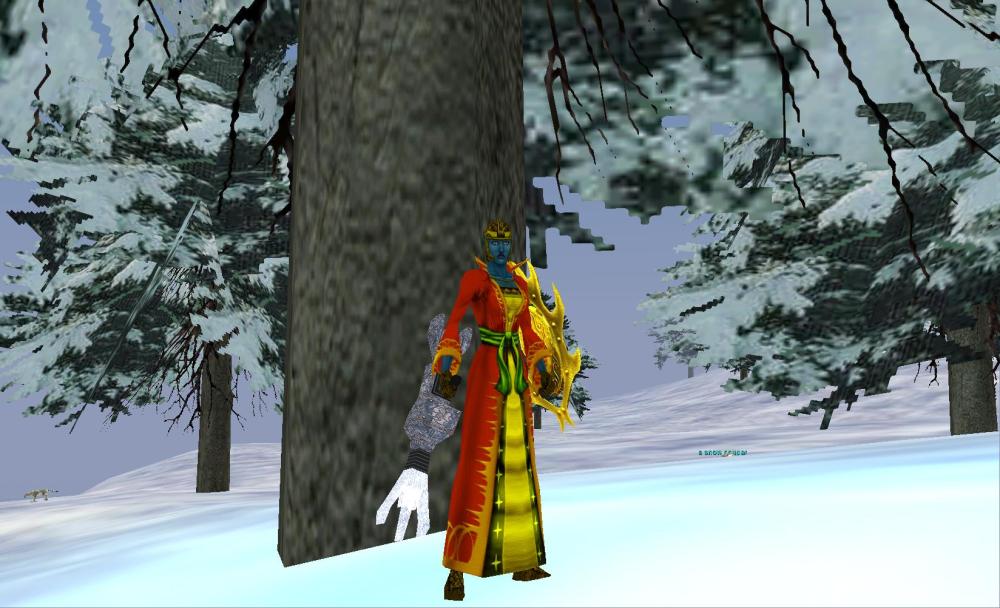 Above: EverQuest’s take on the BFG: That … is a Big Gun.

Even if an idea was good, that doesn’t mean it was going to turn out well, VanCouvering said. “It’s easy to think of a thing, and much harder to make it.”

One example: a box that, when clicked, caused a dragon to pop out.

“I’m never going to click on that thing,” VanCouvering said, laughing. “We tried cursed items for a while. In the universe of the Internet, one guy would get the item and get the curse, then no one would touch it again ever [after reading about it.]”

Sadly, while that cursed item would eventually morph into one of the better items in the game, this didn’t help its popularity, Caraker said.

The trio rattled off their favorite ideas that they’ve never gotten to do: for Longdale, it’s flying combat. For Caraker, it was an urban expansion. Freeport was originally supposed to have some of that – heavy politics, intrigue, players to work with and do jobs for – but it got buried under all the planes-related content in its expansion, he said.

They also had a Drunken Master setup for monks, where imbibing alcohol would improve defensive abilities. “I don’t remember if it ruined our rating, or what, but it didn’t end up making it in,” Caraker said.

The game’s original resist system gave low-level NPCs a tiny chance of doing something to high-level players. Not only did they take that out, but they also ended up taking charm spells off almost all NPCs as a result. 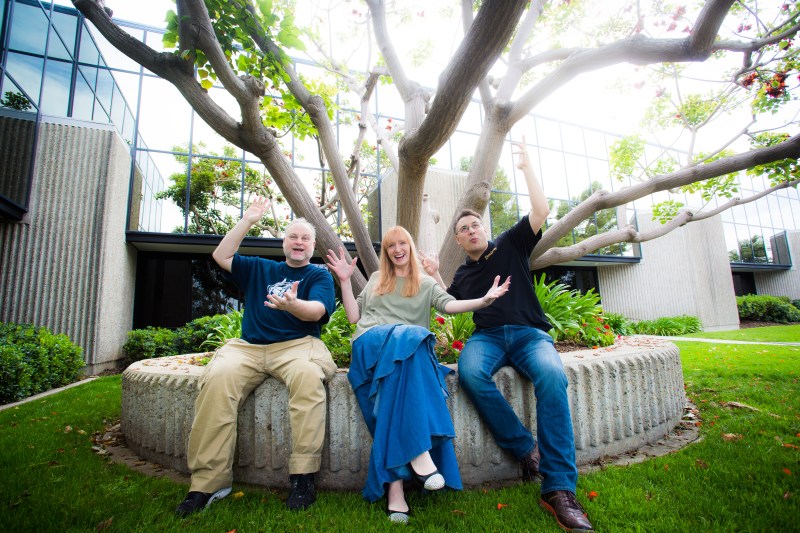 Above: More traditional charm: VanCouvering, Longdale, and Caraker goof for the camera.

Attack of the evil gingerbread man

“There have been a lot of failed experiments,” said VanCouvering, who once created a design document for an entire zone on a muffin.

“The expansion was based on fear,” he said, so what if players or creatures got hold of a shard of fear and became a being of fear — and that being was a gingerbread man? The zone would be the top of a muffin, with cracks in it, and “under the cracks would be corpses and bodies falling out.”

We sat through a moment of silence from his colleagues after he explained the idea.

“The art director said he wanted it,” he said, a little defensively, then chuckled. “It didn’t make it past the ‘Do we really want that?’ mark.” 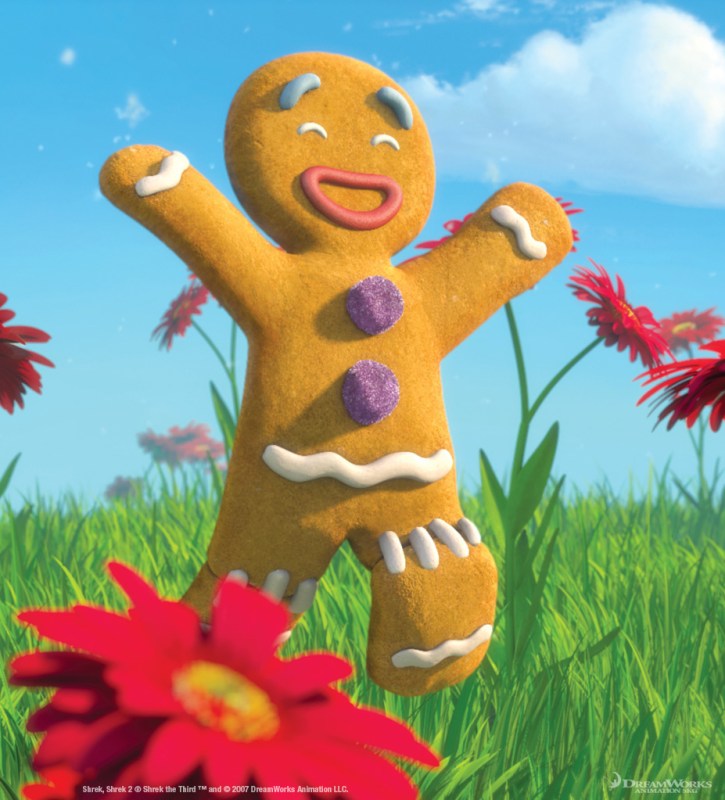 Above: Yes, we wanted a picture of the muffin zone too. Sadly, it was never drawn, so enjoy this much-friendlier gingerbread man instead.

As the team is quick to point out, plenty of good content did make it in after 16 years.

Close to three months remain in the game’s anniversary celebrations. Official events include about 70 player-created questlines, pitched during a mission ideas panel at Fan Faire/SOE Live, and those players are immortalized in game as part of the celebrations.

You can also find a few Easter Eggs … literally. Caraker created a questline for the anniversary event, where you have to make balls of sticky cotton candy.

“If you go to a certain place, there are a whole lot of bunnies that aren’t normally there,” he said, trying not to completely give it away. “If you collect enough of them, you get a bonus reward, a bunny house pet.”

We’re including the images below as major spoilers. Just be grateful they’re not evil death diarrhea muffin bunnies. 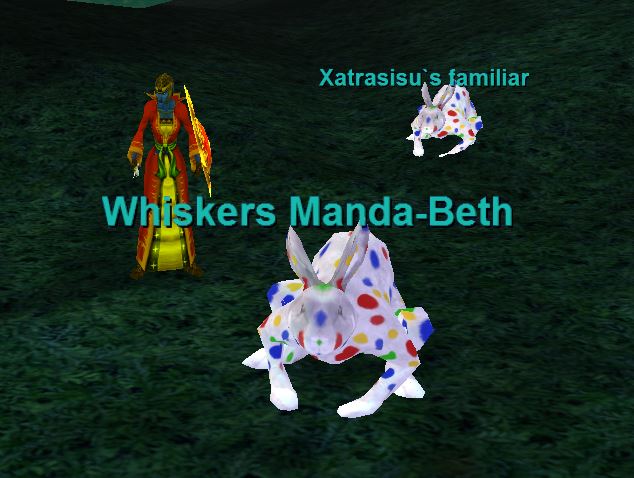 Above: This is what your bunny pet looks like. If you don't want spoilers on how to get him, don't click this gallery.