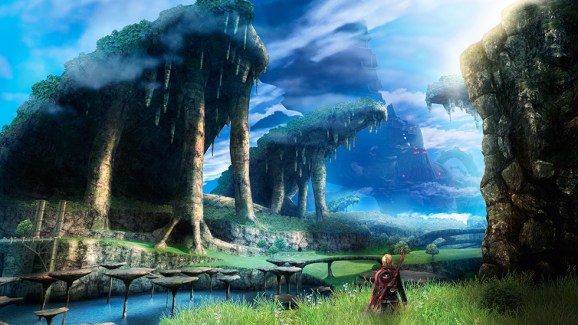 It may seem like moving from a game console to a handheld system would be a step down, but somehow Xenoblade Chronicles 3D is even better on the New 3DS, Nintendo’s latest portable. But how?  It’s not like sweeping changes have been made to the original since its release three years ago on the Wii . Actually, outside of the scant use of the lower screen for menus and maps, the addition of 3D, and a few small gameplay tweaks, it’s practically the same game.

Maybe some of that feeling comes from knowing that it took fan petitioning to get the 2010 Japanese Wii release in North America, and due to a limited run, the original is still rare and expensive. Perhaps it relates to me being a fan of its spiritual successors — the PlayStation’s Xenogears and the two Xenosaga games on PlayStation 2. Or maybe it’s just that having one of the greatest role-playing games of the last decade in your pocket feels really good.

The future of combat

Traditionalists might initially miss the standard menus and turn-based fighting, but give Xenoblade Chronicles a chance and you’ll likely agree that this is the future of Japanese role-playing game combat. Free movement and targeting enables the player to walk around enemies encountered in the field in real time. Choosing to engage an enemy has an auto-attacking feature taking over, letting the player strategize by moving around the enemy, looking for weak points. Properly landed attacks allow for powered up bonus hits and perks, adding to the strategy. This has you walking around constantly, positioning your characters for maximum damage.

It gets deeper with specific commands that provide for linked attacks and later with new abilities that arise from the legendary blade that the story revolves around, the Monado. Being able to predict the next attack in a battle through your weapon is also used as a mechanic, and it really works to spice up the combat.

This all comes together to make for a battle system that feels so much more modern and exciting than classic role-playing games. It takes the best parts of MMO and traditional turn-based combat and mixes them into something that works so well that it’s a shame it hasn’t been used in more games. 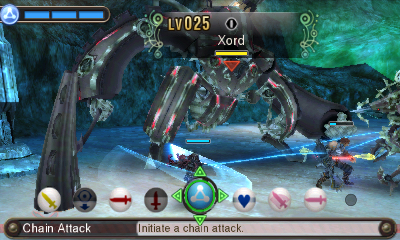 Above: A Chain Attack has all three party members combining their attacks for one huge one.

Before civilization, two planet-sized creatures fought to the death, and now their corpses remain standing. Over time, the bodies have become worlds in themselves, full of a variety of creatures. One of them, Bionis, is the home to humanoids called Homs. The other serves as a base for robot-like creatures called Mechons. When these Mechons begin to invade the Homs’ land, a mysterious blade called Monado is put into action to hold them back. Its wielder is a young man named Shulk.

Even if you’ve already experienced the story of Xenoblade Chronicles, seeing it unfold once again is a pleasure. It’s grand, even for a modern role-playing game, but unlike recent releases from other franchises, such as the most recent Final Fantasys, it’s not so grand that it becomes messy and convoluted. It starts off delicately but slowly eases you into one of the deepest and most rewarding stories I’ve played in a long time. You’ll be drawn in before you know it. It’s like the story is constantly sneaking up on you, surprising you at every turn.

At your own pace

Xenoblade Chronicles makes it clear early on that you have no obligation to take on quests, but it only takes trying out a few to find that the overall world and story are enriched by the new information that you uncover by completing them. Sometimes, it’s just character background or history, but several subplots emerge as well. It’s all written and presented so well that it almost feels wrong to charge head-on main quests without trying them.

While it might not sound too exciting, landmark hunting can be rewarding for players that enjoy exploring. Xenoblade Chronicles features a system that rewards players with experience points for uncovering new areas, further fueling the desire to explore in this huge world. Many unique visual teases lead to new expanses, and all of them are worth checking out. The world still feels huge, even on the small New 3DS screens.

It has so much to do beyond standard exploring. The inventory system is a world of its own, serving as a toy box for strategy fans that like to tinker. Hunting for rare collectibles or running down quests that will improve your stats are just as enjoyable.

And networking is so important in Xenoblade Chronicles that it actually features an organizational chart. You’ll work to build relationships with party members and nonplayer characters on a tree of contacts, advancing your progress as you do so. Improved connections bring benefits in gameplay, like being able to pass skills from one character to the next. 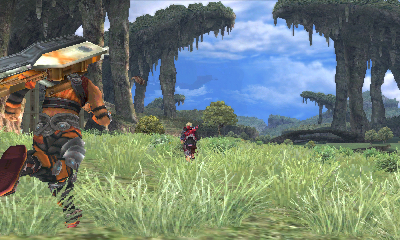 Above: The analog nub on the New 3DS makes for easy camera control to see the game’s world.

If you originally played this on the Wii with a Wii Remote and Nunchuk, like I did, you’ll definitely appreciate the work here — the porting team did their best to copy the Wii Classic Controller scheme to the New 3DS hardware. It all works surprisingly well. All controls are sharp and responsive, just like they would be on a console with a proper controller.

The New 3DS’s analog nub is perfect for a game like Xenoblade Chronicles 3D. It controls the game’s camera, which doesn’t require as much movement as an action game such as Monster Hunter 4 Ultimate does. If it isn’t exactly right for you, it has plenty in the way of custom camera controls in the options, letting you tweak movement speed, view height, and more. It even uses the new ZR and ZL buttons: one for zooming the view and the other for map access.

The capability to save at any time is a must for portable RPGs, and it’s especially appreciated for games as long as this one. Thankfully, the team that ported Xenoblade Chronicles to the 3DS knows this. While it may not sound like much, this is probably the most useful improvement to come from the port.

Also useful is a new guidance system has a 3D arrow pointing you toward your next objective while a distance rank counts down as you near it. Anyone that remembers getting lost in the first one will appreciate this.

It’s too bad that the second screen is essentially a map and extension of the menus, and that this port has no other touchscreen features. But given that the menus are so closely tied combat, I suppose the designers couldn’t do much with the additional screen real estate.

Something to talk about

I see absolutely nothing wrong with using English voice actors over American ones, but the performances in Xenoblade Chronicles 3D are a bit tough to swallow at first. They’re a tad too cheeky for my tastes. It’s not that they’re poorly done — on the whole, the voice work is good. It just takes a little bit to get used to.

Those that enjoy hearing the original Japanese voice work with subtitles will be disappointed to learn that this option has been omitted for the portable version.

One thing that hasn’t changed over the original is how talky the hero and his companions are during battle. Everyone always has something to say, and it’s usually all of them want to gab at the same time. It’s nice at first, but it gets old. 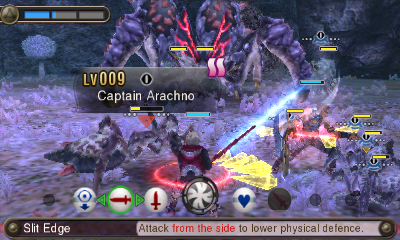 Above: The small screen and low level of detail make battle scenes feel jumbled and messy.

Let me say this first: Xenoblade Chronicles 3D looks great. I’m sure that squeezing a Wii game on the small 3DS screen was no small feat. And the New 3DS handles it all. But it feels like it could look better.

While impressive for its time, the original Xenoblade Chronicles would be seen as dated today. The 3DS version doesn’t look much better, though somehow it doesn’t seem as dated in portable form. That said, it’s still a chunky-, blocky-looking game. It’s never enough to distract from the story or gameplay, but it does have me wishing that character closeups would at least have seen an upgrade. The characters in this story are so likable that you’ll find yourself wanting to get a better look at them.

It’s the same with the faces: These were flat, blurred textures in the original release, and that doesn’t change with the 3DS port. Eyes move and blink, but they look so painted-on that you’ll find yourself watching them to see if there’s any life behind them.

Zoomed out, the chunkiness of the models can make the characters and monsters a bit hard to see. It doesn’t seem like it’s the small screen at fault here, though.

The 3D doesn’t do much

The 3D functionality nicely complements the open world, but it’s not as appreciated during busy battles.

The various menus and prompts of the combat system are displayed at different depths when the New 3DS’ 3D slider is up. This has some elements obscuring others, which might be fine on a bigger screen, but makes for an even more cramped feeling screen on the 3DS. I found myself moving the camera around in an attempt to move the menus or pop-up info boxes out of the way sometimes. While it’s not as visually pleasing, leaving the 3D slider down let me get a better grip on battles in which my party was attacking more than one enemy. 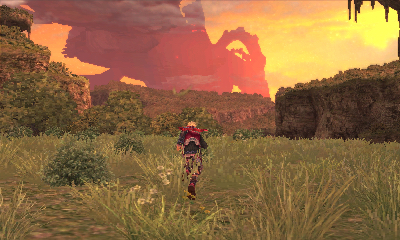 Above: The world of Xenoblade Chronicles is uniquely beautiful.

One of the best Japanese role-playing games of the last five years still reigns, and now that’s on a portable, it’s much more accessible. If you’re open to exploration, it probably has 80 hours of gameplay. For a game that long, being able to play anywhere and at any time is nice. For a game this great, it’s a privilege.

It’s understandable that the port didn’t get a standard 3DS version; it was probably much easier to not have to overhaul the control system. But it’s a shame that the multitudes of 3DS owners out there won’t have access to such a fantastic game, especially after knowing that not enough people played the original release.

For a game this well made, it feels like any criticism is just nit-picking. Xenoblade Chronicles 3D is one of the biggest and best games available for any handheld game system, and it still stands as one of the best role-playing games in recent years, handheld or otherwise. Fans of the original should certainly run through it again, and newcomers should jump in to see what they’ve been missing.

Xenoblade Chronicles 3D is out on April 10 for New 3DS. Nintendo provided GamesBeat with a review code for the purposes of this review.