In the celebrity deathmatch of streaming apps there are only two contenders: Meerkat and Periscope.

Twitter’s much anticipated live-streaming app Periscope arrived this morning in the iOS App Store to a barrage of media attention. Twitter picked up Periscope for roughly $100 million while its product was still in beta, according to the Wall Street Journal.

The arrival comes on the heels of competitor Meerkat’s launch last month at SXSW. Since Meerkat appeared on the scene it has quickly gained in popularity. Right now it’s ranked as the 22nd most used social networking app in the U.S., according to App Annie. Meerkat ranks 160 among all apps.

If that doesn’t paint a picture of Meerkat’s success, let me put it to you this way: It’s so popular that as I’m writing this story, former Florida governor Jeb Bush is meerkating (yeah, meerkat is a verb). The app also recently landed $14 million in investor funding.

However, Periscope still has a shot to be the livestreaming app to end all live streaming apps. For one, Periscope has better integration with Twitter than does Meerkat — a key component to both apps. Plus, as a Twitter acquisition, Periscope has lots of access to Twitter’s myriad resources.

Whether Periscope will kill Meerkat is up for debate. Instead of speculating, here’s a breakdown of the two products — we’ll let you decide.

Meerkat has a bright yellow app icon featuring its suricate mascot. The app links to Twitter and pulls your followers based on your Twitter account. I have a measly 67 followers on Meerkat, though to be fair I only follow six people. Inside the app you are taken to a single screen featuring a list of live broadcasts. At the top of the screen the apps asks, “What’s happening?” Below you have the option to either stream or schedule a broadcast. Clicking on the former option will launch a live stream of whatever you’re doing directly from your phone — congratulations, you’re on TV. 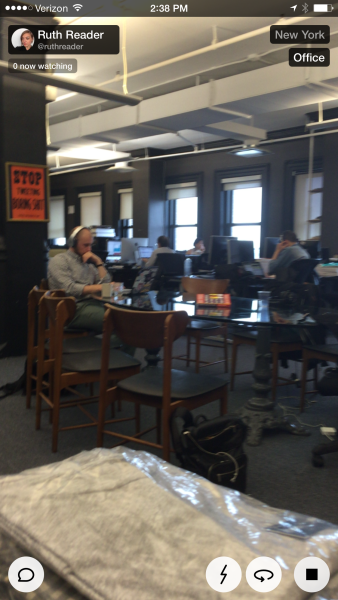 Meerkat will automatically send out a tweet from your Twitter account that says “|LIVE NOW|,” with a link to your Meerkat live stream that can be accessed in app or in a browser on your computer.

The second option, “schedule,” will tweet a link to a future live stream from your account, so people can plan to tune in when you’re live streaming.

Before Twitter shut down Meerkat’s access to its Social Graph, Meerkat notifications would get pushed to the users’ followers.

While you’re streaming, people can chat you with questions, generally add commentary, or like your ‘cast. Meerkat let’s you scroll through the comments, so even if you have a lot, you actually pause the feed and look at comments that passed you by. After you’re done live streaming, Meerkat gives you the option to save your video to your phone.

If you’re just looking to watch, Meerkat supplies you with a stream of live content happening NOW. Meerkat videos can only be watched as they’re happening, which urges potential viewers to tune in.

In contrast, Twitter’s newly launched Periscope allows users to save their broadcasts on the app so people who missed the initial broadcast can replay what was recorded.

The app’s on-boarding process is very similar to Meerkat’s, which leverages Twitter to get users started. I only have 17 followers on Periscope, but that’s likely because the app just launched.

Periscope fouled early by sending notifications to users every time a person liked or followed a given user. The messages were overwhelming enough that Periscope has decided to turn off notifications for the time being, giving users the opportunity to turn them on at their discretion. 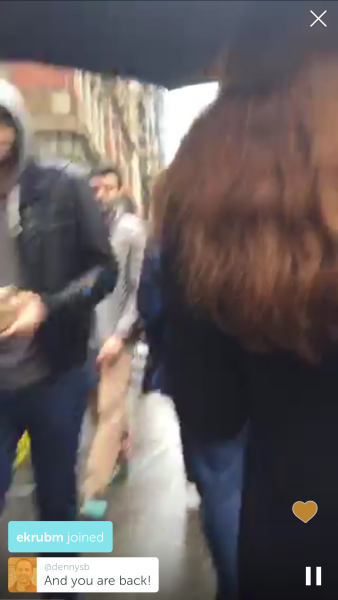 For recording, you click on the middle tab, a camera lens icon not so different from Instagram’s, and then type in what you’re doing. Once you hit “start broadcast” you are live. Periscope does not automatically tweet your live broadcast to Twitter, though it gives you the option to.

I decided to live-stream my lunch break. As soon as I was rolling, people started asking questions — “where are you going?” — and commenting: “so many options,” one person wrote; “so many skinny jeans,” said another. Unlike on Meerkat, you can’t slow the flow of comments or scroll back. There are also these hearts — Periscope’s version of likes. You can tap your screen as many times as you like and it will send a flurry of hearts onto the interface. The feature is very reaffirming, to say the least.

When I made my lunch decision, I said goodbye to the people following my broadcast and signed off. Periscope then started uploading my video so that other people could watch my amazing lunch decision. I could have cancelled the upload, but I decided to let it happen. Now for a 24-hour period only, you can watch me traversing Dean and Deluca (fancy, I know).

Some people think that being able to keep broadcasts on Periscope is a good thing, but it actually may work against the app. One of the reasons Snapchat has seen such success is because its videos disappear, allowing users to be silly without worrying about it. With Periscope your shitty live video will be available for viewing for 24 hours. It’s true a day is not a long time, but when you’ve done something especially stupid on the Internet, it can feel like an eternity.

Obviously, for more polished brands, Periscope’s sleek interface and ability to save video for later viewing is a boon. No doubt getting brands to use your platform is an obvious win, but that may set Periscope up to be a place you go to watch your favorite brands, networks, or celebs live — not to record your own vids.

Meerkat, on the other hand, may be the spot for plebs to do their broadcasting. Sure, its interface isn’t the most beautiful, but it’s super utilitarian. It’s almost as if the interface is saying, “I’m unpolished, and you should feel free to be unpolished too.”

Whatever the case, as Meerkat’s recent funding shows, this fight is far from over.