Less than two weeks after Twitter confirmed its acquisition of live video-streaming company Periscope, the social network has introduced the first fruits of this deal, kicking off with an iOS app.

Periscope, which is optimized for iPhone, is all about letting you broadcast in real time to your followers. When a broadcast is live, followers can interact in real time by commenting and sharing “hearts.” Though this is a standalone app, it works tightly with Twitter, meaning you must sign in with your Twitter credentials — similar to how Vine works. 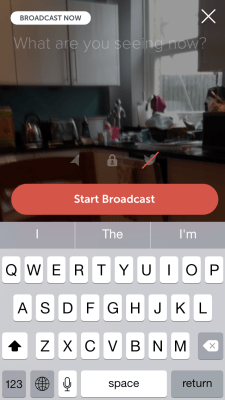 Once a broadcast has ended, it can be viewed for 24 hours as a “replay,” though it can be deleted immediately or saved for posterity to a user’s camera roll. You can also configure things so that a tweet is sent to your Twitter followers when a broadcast starts, who can elect to watch on the Twitter website or in Periscope itself if they have that app installed.

It’s worth noting here that broadcasts can also be made private, so only those you choose to watch can do so — simply hit a little “lock” icon prior to broadcasting, and select those you wish to invite. 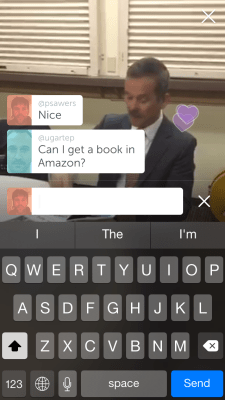 The value you get from Periscope will very much depend on who you choose to follow — you can either follow all the same people you follow on Twitter (who use Periscope) or select just a handful.

It’s likely that over time, once you get a better feel for who does the best “Periscopes,” you’ll be able to curate your experience. Also, the more hearts a user gets for a video, the higher it rises in the “Most Loved” chart, which helps guide you towards the skits that are perhaps most worth watching.

This signals a deeper shift into the media realm for Twitter, which has long transcended its simple “140 character” roots to become a multimedia titan that caters to broadcasters.

With Periscope, however, Twitter is offering a standalone app for anyone to broadcast themselves in actual real-time. This should prove a powerful tool for journalists and citizen hacks alike, who can use the app to capture impromptu moments and stream to the world as events unfold.

It’s also worth giving a small nod to Meerkat here — you know, the live video-streaming app that shot to the world’s attention recently off the back of Twitter before Twitter made it slightly harder for Meerkat users to gain followers. If nothing else, Meerkat has proven the demand and interest in easy live-streaming through Twitter.

Meerkat has gained a loyal band of users, but it is still a small startup despite its recent $14 million funding round. Periscope is from Twitter itself, which can create tight integrations with Periscope, and ultimately has more resources to create a beautiful, fluid broadcasting experience.

Though Periscope is iPhone-only for now, there is little doubt it will arrive for Android eventually too. When Twitter launched its looping video app Vine on iOS in January 2013, it took some six months to arrive on Android — so that perhaps gives a rough indication as to when we can expect this app to go cross-platform.