Fancy yourself a fan of Square Enix but have never been to Tokyo? Here’s the next best thing: pictures.

During a recent visit to Tokyo, GamesBeat visited a few of Square Enix’s locations within the city. We complemented a quick peek into its official headquarters by visits to both its official store, Artnia, and its Dragon Quest-themed bar, Luida’s Bar. You can see a gallery containing snapshots from all three locations below.

Japanese publisher Square Enix is based in Tokyo, in the city’s famed Shinjuku ward. The company behind hit game franchises such as Final Fantasy, Kingdom Hearts, and Dragon Quest takes up multiple floors of the sprawling Shinjuku Eastside Square office complex, located southeast of the main train and metro stations of the area. It shares the building with large companies such as Japanese mobile giant SoftBank and Citigroup Japan.

But it feels like Square Enix owns the place, as its gleaming white and glass lobby is visible from the first floor, just opposite of some publicly accessible coffee shops. A peek inside is likely all you’ll get a security staffer stands guard just outside the lobby, posted in front of a sleek black glass exterior. Beyond the guard and the reception desk and in the floors above it lies the heart of the publisher’s business. A good part of the building directory is dominated by Square Enix-related offices, including its latest subsidiary, supercomputer cloud gaming platform Shinra Technologies.

Just outside the main headquarters, in a lot in the corner of the grounds of the Shinjuku Eastside Square complex, lies a white, egg-shaped building labeled Artnia. This is Square Enix’s official goods store, which also doubles as a cafe. Its latest official franchise toys, soundtracks, clothing, and jewelry (yes, jewelry) are for sale here, with displays posted all along the walls of the egg-shaped building.

The center of the egg serves as the Artnia cafe, where themed cocktails and coffees are available for fans that are lucky enough to land a rare seat (only about eight are available). Those looking for something more substantial can dine on sandwiches and sampler plates, though most choose the themed pancakes, which are either shaped like a Dragon Quest Slime or are decorated with Final Fantasy’s Chocobo art.

Located in the middle of relatively unexciting stretch of street in Tokyo’s Roppongi district is a cafe and bar dedicated solely to Square Enix’s Dragon Quest role-playing game series, called Luida’s Bar. The placement of an establishment this geeky in an area known for its wild nightlife is quite surprising.

Named after a character from the game series, this sleek, dark establishment that has been decked out with memorabilia from the Dragon Quest world. The bar serves themed drinks, which come in ornate glasses or in vials, and some have metal swords as stirrers. The food menu is also themed, which has patrons dining on Silme meat buns, or Mud Hand curry, among others. Lucky fans can pay to get into the Dragon Quest-themed karaoke room, where they can drink and dine while belting out Square Enix game tunes. 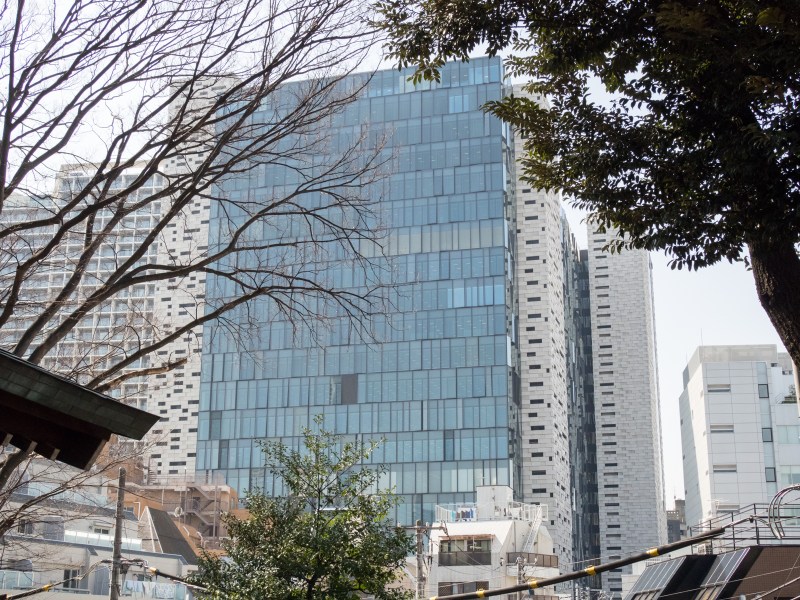 Above: Square Enix headquarters are within this building in Shinjuku.