Walking down the street in San Francisco just the other day
Wondering what has happened to the freaks and hippies and the punks
Everybody’s squeaky clean, they look and dress and act the same
I don’t give a shit about your IPO I live in El Cerrito
— from “El Cerrito” by Cracker

While recording the latest Cracker album in studios across the East Bay, lead singer and songwriter David Lowery watched first-hand as tensions between local residents and the booming tech industry boiled over.

As someone with ties to the Bay Area that now go back decades, he lamented the changes the tech boom was bringing to the region, particularly the impact on the area’s once-thriving music scene, which was beginning to get squeezed out.

As a songwriter, though, the outcry and the tech backlash were irresistible fodder for the songs that make up the “Berkeley” half of the new album, which is called Berkeley to Bakersfield. The hard-edged rock sound and themes of the “Berkeley” songs are a tribute to the area’s punk scenes of days gone by, which included a strong sense of protest and social justice.

“I think about things like East Bay punk rock, the ’60s free speech movement, and the whole Berkeley weird hippie-freaks scene, the anti-Vietnam war stuff,” he says with affection. “The challenge when we were making that album was: What would be the protest? It not only has to be musically right, the subject matter has to be placed here.”

The result are some scathing critiques of the Silicon Valley tech scene. While listening to Lowery’s musical take-down of tech, it might be easy to brush it off as a reflexive protest of a bleeding-heart artist. And in this case, Lowery had already been pigeonholed as an outspoken critic of digital music services.

In fact, Lowery’s feelings about technology, the Internet, and digital music are far more complex and nuanced. They are informed by his background as a mathematician (he’s a quant!) and his current day jobs, which include being a lecturer at the Terry College of Business at the University of Georgia at Athens (research includes: “Application of concepts from Derivatives Volatility Trading to the Music Business”).

In an interview with VentureBeat, Lowery discussed his feelings about the economic forces reshaping Bay Area culture, as well as his view of the relationship between tech and musicians.

“I’m kind of to the right of a lot of my peers in the music business,” Lowery said. “People in music tend to be more liberal. I tend to be more of a markets guy. I tend to look at it and believe that the market will balance things out. On the other hand, that may take a long time, and we’re losing a lot in the process.” 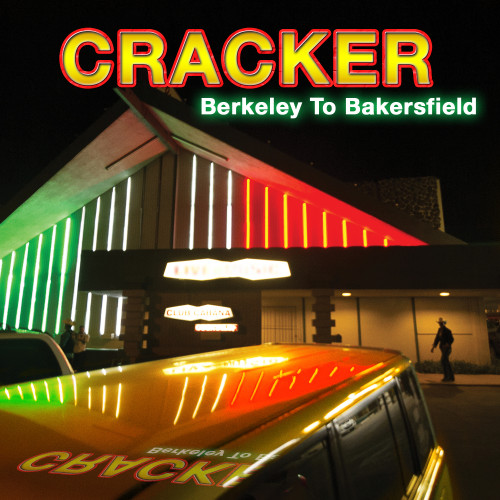 Mama took the Alameda Transit bus to work each day
All the way down San Pablo, thirty years a Naval base
Never heard her once complain about taking public transportation
You should ride the city bus just like the rest of us in El Cerrito
— from “El Cerrito”

Berkeley to Bakersfield is Cracker’s first album in five years. In contrast to the rock of the “Berkeley” songs, the countrified “Bakersfield” songs on the album’s second half draw on the band’s rootsier side that’s also been a part of its sound since its founding in the early 1990s.

While Cracker is semi-officially based in Richmond, Virginia, Lowery lives in Athens. But he also spent significant time in the Bay Area over the past few years, staying at the home of friends, including those of his bandmates in his other longtime musical venture, Camper Van Beethoven, the band he cofounded in 1983.

Over time, as housing costs have soared and neighborhoods have gentrified in San Francisco, most of his musician friends have migrated from San Francisco to the East Bay — and in some cases, have left the Bay Area altogether.

“It’s definitely, radically changed,” Lowery said. “When we were playing there in the ’80s and the early ’90s, a lot of venues we played in were in rough neighborhoods. And those are all gone now. To me, I’m just sort of watching the Bay Area transform into a place that doesn’t really have a music scene anymore.”

The rising backlash against tech companies in San Francisco just happened to coincide with the recording of the new album. And Lowery’s take on the tech industry is sprinkled throughout the first half of the album.

“We were the making the record when the Google bus protests were happening, and it got me really fascinated,” he said. “So we used that as a criticism of the current state of Silicon Valley.”

There’s “March of the Billionaires”:

Get into line, your poverty brings us all progress
Stop talking back, we’re richer and smarter than you
Or risk a body check from Mr Khrushchev, under the Gogolplex (pronounced: “Googleplex”)
Put your head on a pike, we’ll stick it outside the city gates

But it’s “El Cerrito” that charges at tech with a full head of steam. The song also illustrates the way Lowery tends to write, often trying on the voices of other people. In this case, the voice of the song is that of an actual cab driver who was driving Lowery and some friends home one night.

On the way from San Francisco to Albany, the cab driver saw a Lyft car sporting the firm’s giant trademark pink mustache. He turned to Lowery and asked if it was OK if he stopped the cab so he could get out and flip off the Lyft driver. After getting back into the cab, the driver delivered a long rant that became the basis of the song, including the phrase, “I don’t give a shit about your IPO.”

“A lot of what I’m doing is playing with certain voices,” Lowery said. “The El Cerrito guy’s is one voice. I have a little bit more moderate views than he does. But it’s close.” 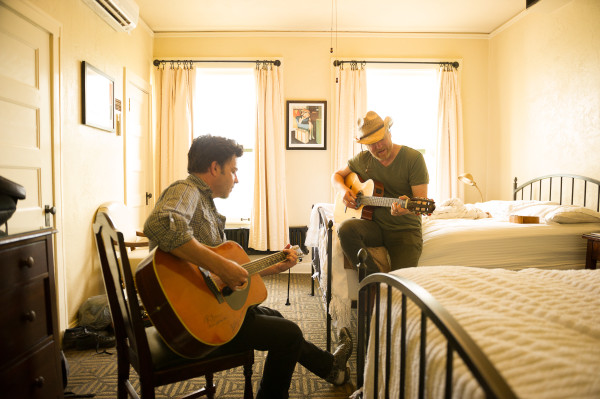 Lowery, 54, was born in Texas, but grew up in San Bernardino County. He later left the Inland Empire to attend University of California Santa Cruz where, in addition to playing in Camper Van Beethoven, he earned a bachelor’s degree in mathematics in 1984.

“I remember when I moved from Southern California to the Bay Area, it was much more of a middle class world compared to where I came from,” he said.

Camper’s rise as a successful indie band in the 1980s was followed in 1990 by the cofounding of Cracker with guitarist Johnny Hickman. Cracker went on to even bigger mainstream success that decade than Camper.

That he has been able to keep both groups going off-and-on for several decades, including regular touring and making new albums, is something he attributes, in part, to the Internet.

“My entire career has been highly dependent on technology and the web,” Lowery said. “Bands have been web-enabled since ’92, ’93. And really, we’ve been a web-based business since 1999 or 2000. The majority of interaction with our fans, aside from live performances, is online.”

That embrace of tech goes far beyond just throwing up a website to publicize his bands. One of Camper’s cofounders, Victor Krummenacher, is an art director at Wired Magazine. Another Camper cofounder, Jonathan Segel, worked at Pandora for three years.

And Lowery? According to his LinkedIn profile, Lowery is on the board of the Athens Angel Fund, he’s an avid blogger, and he was even on Groupon’s informal board of advisors for three years. 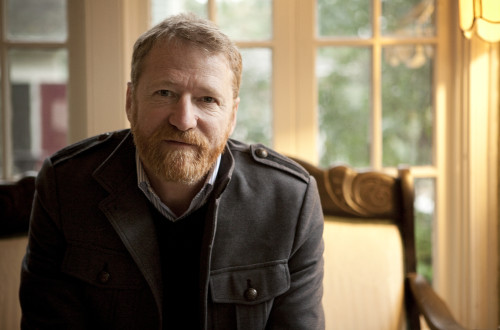 Papa was an engineer, worked at Hewlett-Packard
Dumbarton Bridge two times a day then lost his job and pension
We would go and visit him in bars in Jack London Square
I don’t give a shit about your IPO I come from El Cerrito
— from “El Cerrito”

And yet, in many circles, Lowery has been declared an enemy of the future for his critiques of streaming music services.

These include his writing for the Trichordist, a community blog that advocates for fair pay for artists. (See: “My Song Got Played On Pandora 1 Million Times and All I Got Was $16.89, Less Than What I Make From a Single T-Shirt Sale!”)

And last year, Lowery testified in front of the Judiciary Committee in the U.S. House of Representatives on the subject of fair use of musicians’ music and lyrics for remixing and lyric annotations websites. Lowery worried that expanding the scope of fair use would allow lyric sites and remixers to use more content without paying artists. Instead, he wanted the law to remain in place as a way to encourage new music services to define business models that would allow them to generate income that could be used to pay artists. 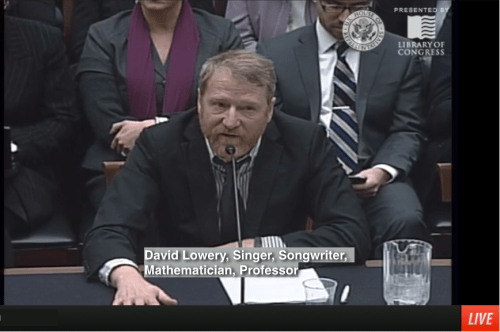 “I’m seen as a digital critic, but I don’t think that’s really fair,” he said. “I’m really a critic of how the digital realm pays artists. It’s more of a labor dispute. It’s like if we were the coal miners in the coal mine. It’s not that we’re against the coal mine. We just want to be paid better.”

As an mathematician and economist, though, he continues to struggle with how he feels about the sweeping impact technology is having on the broader economy. He doesn’t believe it’s inherently bad, but he’s also not sure people are considering the implications “quite as much as they should be.”

“A lot of the things that limited the size of firms have been removed,” he said. “It’s a time of striking changes. It seems technology is producing a winner-take-all economy.

“It’s something we need to address head on.”

If there is a lesson from this story to be learned
It’s not exactly what you think, you shouldn’t be concerned
It’s not that we don’t like the rich, it’s simply that we think this kind is boring
Everybody thinks and acts the same that’s why I live in El Cerrito
— from “El Cerrito”