The economy of favors

They made the game over three years. But the process fundamentally changed the way that Duringer felt about what being an indie was really about. Duringer and Angstadt were able to pull it off because they were very resourceful.

Duringer found that “tribes are forming to create layers of support” that helps indies accomplish some of the same things that AAA companies do. One of those tribes is dubbed West Indies and Gamenest in the Bay Area, and there’s Glitch City in Los Angeles. Hacker Dojo, which isn’t game specific, is also a community of hackers and startups in Mountain View, Calif.

Game developers have to master a lot of disciplines, including programming, art, audio, and design. But to bring a game to market, they also have to know something about disciplines like the law, marketing, and other business issues.

“A lot of indies go indie because they want to avoid these business tasks,” Duringer said. “The irony is that they become personally saddled with them. These tribes are forming to establish tribes of pooled resources.”

At West Indies, one group does a weekly session where each developer talks about the progress they’ve made, partly to get feedback and help, and partly to foster accountability. By sharing resources and doing favors for each other, the indies can stretch a small budget much farther.

Some of the tribes are secretive. But Duringer said you can find them by showing your game at events like IndieCade or PAX. Development tool companies often seek out developers to show games which use the tools. Duringer often asks show organizers if she can show her game if other developers are no-shows. In that case, she’s turning it around and doing them a favor. She’s done other favors that help trade volunteer work in exchange for publicity for her game, including getting to the front page of livestreaming site Twitch.

She also said you can find out about tribes at shared workspaces. Companies such as Double Fine Productions, IGN, and Hacker Dojo operate some of these shared workspaces. You can also find birds of a feather at game jams, like Global Game Jam. And Duringer holds a game night at her house once a month to socialize with other game makers. One worker in a shared work space volunteered to port Cannon Brawl to Linux and Mac. 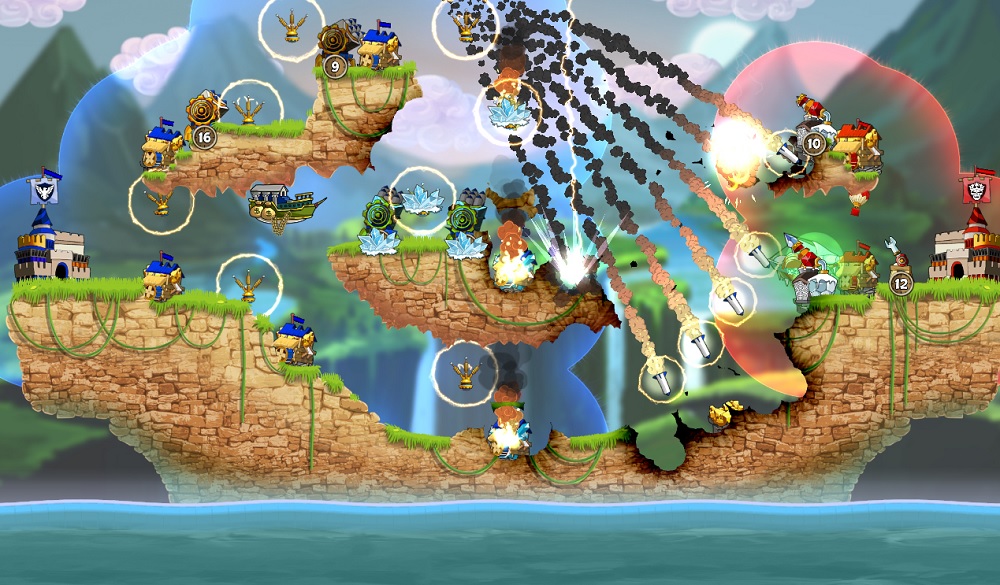 There are some downsides. Resources are finite. If you’re relying on volunteers, sometimes they will flake out or not do the work you wanted. Sometimes it makes sense to do revenue sharing with people whose help you really need. You can also credit them on your game. Duringer found that she had to relax control over people who were simply volunteering to do something, since they weren’t paid employees.

But on the plus side, the talent in the indie community has been on the rise. So the people doing favors for you are more useful.

“These tribes are popping up more and more, and part of the reason is there has been an exodus from AAA games,” she said. “They have exploded budgets and can’t afford to take the same risks. Indies can find space on the creative edges, and this is a good place for people who have become disillusioned with AAA.”

Cannon Brawl is not yet a giant success, but it’s doing pretty good. Duringer said the game did better than expected on Steam Early Access, and the ratings for the game were in the 90s on Steam. The title has been able to reach a worldwide audience. It has dedicated fans in Russia, for instance. That’s a rare accomplishment for a game made by two people.

“I think we would have done better if we had been able to build awareness,” she said. “People who play it tend to really like it. So we recently released a free demo, and that has helped lower the barrier to entry.”

While indies compete with each other, they can still find a lot of space to help out.

“Games are not a finite resource,” she said. “It’s not like we’re oil miners. If someone else takes less of the oil, there’s more for me. The pie is huge. And indies only need to sell a fraction of a fraction to be viable.”

The biggest problem for indies remains discoverability. They have to get out on social media and hype their games.

“Asking for help can seem like burden,” Duringer said. “I’ve become convinced that it’s always good to ask for help. It lets people know what you’re excited about working on and it opens a dialogue for exchange.”

Sometimes the favors are one way. On Cannon Brawl, a developer helped Duringer improve the explosions in her game.

The game launched last September. It is available on the PC via Steam, Linux, and Mac. Duringer is hoping to take it to more platforms, and she’s working on another title as well. Angstadt has moved on to another job, but Duringer hopes to find a way to port Cannon Brawl to new platforms. For her new game, she is doing the programming as well as the design and art.

And at the moment, she’s taking time to learn how to make a virtual reality game for the Oculus Rift, the immersive 3D goggles that is being built by Oculus VR, which Facebook acquired for $2 billion last year. Duringer said it felt good to take a break and give a talk at the GDC about all the help she received during her “school project,” and how she hopes to return favors as well.

Reflecting on the three-year project, Angstadt said, “With the enormous amount work it takes to ship an indie game, it was really great to have a co-founder as capable and talented as Theresa.”

Meanwhile, Duringer’s mother, Maryann Klingman Duringer, is happy with her daughter. Duringer said they play games all of the time and talk about game design.

“Several years ago, I was shopping at a Bay Area Apple Store and saw in the game section on a shelf not only a game Theresa had worked on at Maxis, but also games I had produced,” Klingman Duringer said. “It was a joy to see our products on the same shelf in an Apple Store. I felt excited for us and proud of my daughter.” 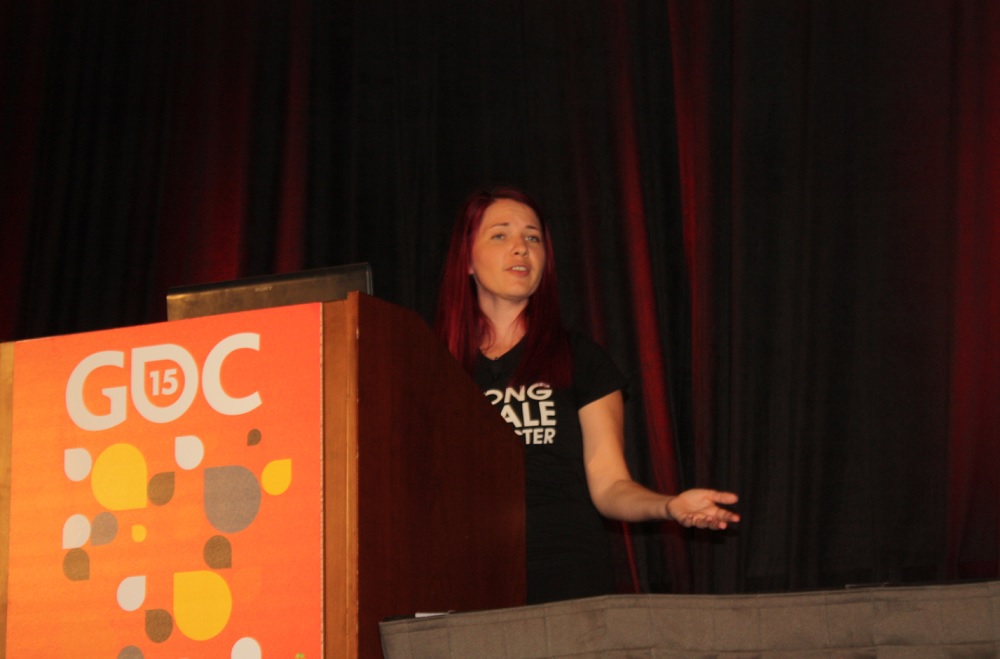 Above: Theresa Duringer talks at GDC 2015 about the economy of favors for indie devs.