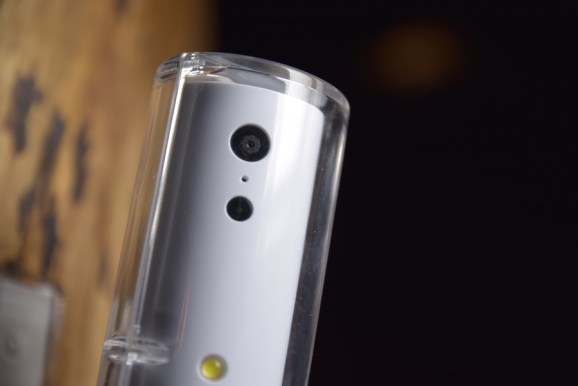 The iSensor HD Patio was specifically designed for use outside the home and is housed in a clear, weather-resistant casing. It can be controlled remotely by users via both Android and iOS apps. The camera comes standard with 4 GB of onboard memory and can remotely pan 170 degrees with a user’s mobile device. Further, the camera has a motion sensor and a 240 degree range of view without distortion, according to its Indiegogo campaign. If suspicious activity is detected, the camera will instantly inform users via notifications, snapshots, and HD-quality video that is automatically uploaded to the user’s Google Drive; all for no extra charge.

While the iSensor is only looking for $1,000 on Indiegogo, but has raised over $150,000. ISensor HD Patio holds great promise, offering clear advantages over many rival products.

The WonderCube, a tiny device featuring eight-in-one mobile functions, aims to end that problem. The WonderCubs is small enough such that it can conveniently be attached to a key ring. Some of its features include a foldout flexible USB cord measuring 3 inches when extended; gold-plated connectors that allow quick charging through any USB port; USB On-The-Go (OTG) functionality that provides 64 GB of smartphone storage via a built-in microSD card reader; a battery charger that allows users to plug in a 9-volt battery in order to provide an emergency power boost to a depleted phone battery; a mini LED flashlight; and a phone stand function that can be used in either portrait or landscape mode.

The WonderCube has a lot of potential on account of its small size and its many mobile functions. Backers agree and have helped raise over $150,000 for this product. HiSmart is a smart convertible bag that goes from messenger to backpack in just two seconds. Simply connect a smartphone to the bag and an external remote allows the wearer to accomplish a number of things. For instance, if the wearer wants to remember a certain location, they can pin that spot to a map to find it later. Music and camera controls are also accessible from the remote. HiSmart also makes hands free calling and recording notes or messages easy. In addition, it has a “Buddy System” feature that lets the HiSmart find a lost smartphone and a smartphone find a lost HiSmart.

All in all, HiSmart is a great product for commuters and other important business people who find themselves in motion a lot. With the help of Indiegogo, HiSmart has already exceeded $100,000 in funding.