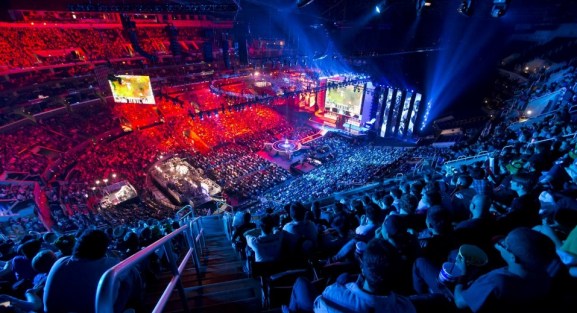 League of Legends draws huge audiences, and many want to participate in related fantasy sports.

What 2014 sporting event had more viewers than the NBA Finals (18 million), the NCAA men’s basketball championship (21.2 million), and the World Series (23.5 million)? If you guessed the Super Bowl (111.5 million), you’re correct. If you guessed the League of Legends Season 3 World Championship, an electronic sports (e-sports) competition that brought in 27 million viewers for a multiplayer online strategy game, you are tapped into the next big tech trend from Asia.

Although e-sports seem “underground” to most Americans, they are already a multibillion dollar industry in Asia, and they are far more popular in the U.S. than most people realize. In 2013, more than 71 million global viewers watched gamers compete for $25 million in prize money, according to SuperData Research. In the U.S. alone, 31.4 million watch e-sports; 70 percent of them are male, and 55 percent are between ages 21 and 35.

With at least a tenth of Americans watching, e-sports are already mainstream by any reasonable definition. Video platforms like the Amazon-owned Twitch now generate millions in advertising and subscription revenue by allowing individual e-sports players to broadcast to fans. However, entrepreneurs haven’t monetized e-sports the way they have mainstream American sports – billions of dollars are untapped.

I would argue that the next major opportunity in e-sports is fantasy gaming, a staple of American culture that generates nearly $4 billion from conventional sports. To understand why fantasy e-sports are feasible, we have to look at the evolution of e-sports in South Korea. We have to step back 17 years to the launch of StarCraft, the sci-fi strategy game that started it all.

StarCraft and the rise of e-sports

In October 1998, American video game maker Blizzard Entertainment changed the history and culture of South Korea when it released StarCraft. It created the e-sports we see rising in the U.S and around the world.

South Korea was an ideal launching ground for StarCraft because, unlike U.S. and Japanese markets that favored home gaming consoles like the PlayStation, Koreans preferred PC games. StarCraft was one of the first multiplayer strategy games that enabled players to compete against each other via the Internet, and to say it became a hit in South Korea is an understatement. Between 1998 and 2007, Blizzard sold 4.5 million copies of StarCraft in that Asian nation – almost half of the 9.5 million copies sold worldwide.

E-sports developed into a nationally recognized sport. By the end of 1998, the top StarCraft players had already formed the Korea Pro Gamer’s League (KPGL). Within three years, South Korea had launched the Korean E-Sports Association; more than 50 corporate-sponsored teams competed in the league; and OnGameNet (OGN), the world’s first dedicated e-sports TV channel, began broadcasting all the action. The first World Cyber Games, the Olympics of e-sports, took place in 2001 and welcomed foreign gamers to experience e-sports culture.

2007 was a watershed moment for e-sports. The broadcast rights to competitions had become so valuable that TV stations now had to negotiate with the e-sport leagues – just like U.S. networks do with the NFL and NBA.

Nowadays, the dominant e-sport game is League of Legends, a multiplayer battle arena game released in 2011 that brought in 32 million viewers for the 2013 World Championships. Defense of the Ancients 2 (Dota2), an arena game launched in 2013, is on the rise. Dota2 paid out a $10.9 million purse for its 2014 championships – the biggest in e-sports history.

South Korea developed e-sports and fostered the competitive gaming culture we see rising in the U.S. The games may be American, but the associations and tournaments with the longest history, and the most dominant teams and players are overwhelmingly Asian. Based on the way e-sports developed in South Korea, it’s clear that e-sports are ready to go mainstream in the U.S.

Despite the 31 million Americans who watch e-sports, it’s still difficult to comprehend the gravity of competitive gaming until you realize that Americans pay money to watch other people play video games — and advertisers pay for their attention.

U.S. e-sports are have a dominate player: Twitch, a livestreaming video platform that Amazon acquired for $970 million in August 2014. Today, Twitch brings in over 100 million monthly users, including half of all millennial males in America. Nearly half of Twitch users spend over 20 hours per week on the platform, which explains why it ranks fourth in the U.S. for Internet traffic after Netflix, Google, and Apple.

On Twitch, people play video games for a live audience, and top broadcasters can earn as much as $20,000 per month, according to the International Business Times. Successful Twitch broadcasters earn a share of advertising revenue and can charge people for premium subscriptions that include “subscriber only” chat, extra emoticons, custom chat badges, and other little perks. It seems crazy that American millennials would pay the unnecessary $5 per month, but in August, Re/code reported that Twitch had up to 600,000 paying subscribers.

E-sports in America are no fad. Twitch has the levels of user engagement and combo B2B and B2C revenue streams that most startups aspire to. Still, ads and subscriptions are only the tip of e-sports monetization.

Twitch is evidence that the U.S. has a market of e-sports fans who are so passionate that they will watch 20 hours per week and even pay their favorite broadcasters for chat privileges. They sound a lot like North America’s 41.5 million fantasy sports participants. The parallels — and early success of e-sports fantasy gaming — suggest that fantasy gameplay is the next step in monetizing e-sports.

The 41.5 million stat comes from the Fantasy Sports Trade Association (FSTA), which advocates for U.S. and Canadian fantasy gaming. They exist because someone needs to make sure lawmakers don’t classify fantasy sports as gambling. Based on FSTA data, players spend $3.64 billion per year on fantasy gaming. The audience is 80 percent male, consumes almost 18 hours of sports per week, spends another 8.67 hours per week on fantasy sports and has an average age of 34. This demographic is strikingly similar to the American e-sports fan base, only a little older and a couple million bigger.

When you consider the male millennial audience, the huge hours of viewing time, the tournament circuit, and the infrastructure available via Twitch, fantasy gaming is an ideal and probably lucrative market. If someone builds it, those e-sports fans who spend 20 hours a week watching games are going to realize that they can pick winners and cash in, just like their counterparts who play fantasy football and basketball.

Fantasy apps like FanDuel and DraftKings illustrate how much cash is shifting from informal friend groups to the web. FanDuel alone collected over 370 million in entry fees during Q4 2014 – 4.5x more than one year before. DraftKings expects to pay out over $1 billion in prizes this year.

Fantasy e-sports are promising regardless of whether American TV channels choose to show gaming or not. As a joint NAPTE and Consumer Electronics Association study found, just 55 percent of millennials use TV as their primary viewing platform, and that number will continue to drop. Even without TV programming, e-sports and its fantasy leagues may be ahead of the curve rather than at a disadvantage.

Jay Eum is cofounder and managing director of TransLink Capital. Eum is one of the chairmen for our Deals boardroom session at the upcoming GamesBeat Summit.