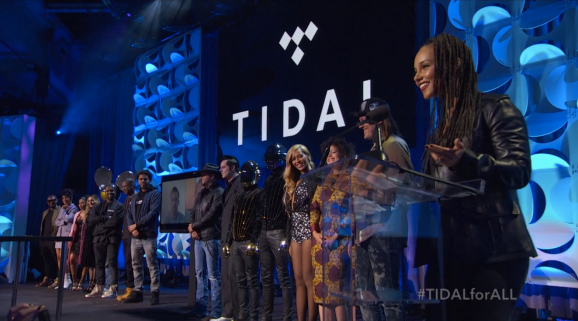 Jay Z was joined onstage by a staggering cast of the world’s most famous musicians who were introduced as part-owners of the new venture. Among them were Beyonce, Kanye West, Daft Punk, J. Cole, Rihanna, Madonna, Deadmau5, Jack White, Jason Aldean, Usher, and two members of Arcade Fire.

The presentation itself was beyond strange. They were certainly shooting for an Apple keynote feel, but instead it unfolded like a weird dream: Each of those megawatt musicians came onstage one by one to a tiny amount of applause. Alicia Keys gave speech about history or music or something. Then Radiohead’s “The National Anthem” played as they all signed a document, each musician passing the pen to the next signee. Coldplay’s Chris Martin was Skyped in, but nobody knows why.

Then it just ended. The audio cut out, the lights dimmed, and they all walked offstage together.

So what did we learn? Not a lot.

Tidal will offer lossless-quality audio and feature exclusive content. There will be no free version. Pay either $19.99 per month for exclusive content and “CD-quality” streams or $9.99 a month for a compressed format (the latter was announced during the press conference today). We also learned that the doubled royalty rate only applies to premium subscriptions. The standard subscription only gets you standard-def audio and only pays artists standard royalties.

Though the competing service was never named, this is all a clear move to poach Spotify’s user base. Music’s biggest names (and biggest labels) have increasingly decried the industry’s royalty model for streaming. They’re also vying for a bigger bite of the huge spike in streaming. Spotify, unsurprisingly, has fired back.

Despite the blinding star power onstage at today’s announcement, I still have lots of questions:

Tidal is now open and available to subscribers, of which there are currently 17,000.