Those huge, PC free-to-play mulitplayer online arena battlers are about to make more money than the long-dominant massively multiplayer online games for the first time ever.

League of Legends and Dota 2 are among the most played games in the world, and last year they generated (along with other MOBAs, or multiplayer online battle arena games that feature teams of players going up against each other) $406 million in revenue in North America, according to research firm EEDAR. The analysts at EEDAR expect revenue from these games to grow by 23 percent in 2015 to $501 million.

This is rapid growth for a type of gaming that only really came into existence as a product in 2012. This represents the changing landscape of PC game spending, but it also represents a wider turn toward competitive games as a legitimate pastime. An example of this is the championship event for Dota 2 selling out the 17,000-seat KeyArena in Seattle in a matter of minutes. The e-sports aspects of these games, including events and advertising on livestreams, is on pace to reach $500 million this year worldwide. Young people are integrating these games into their culture, and League of Legends is even usurping traditional sports like football and basketball for some.

“Much of MOBA’s growth in 2014 was due to the continued rise of market leaders League of Legends and Dota 2,” reads EEDAR’s report. “But EEDAR believes that many future entrants — such as Heroes of the Storm and Infinite Crisis — will continue to broaden the audience rather than cannibalize users.” 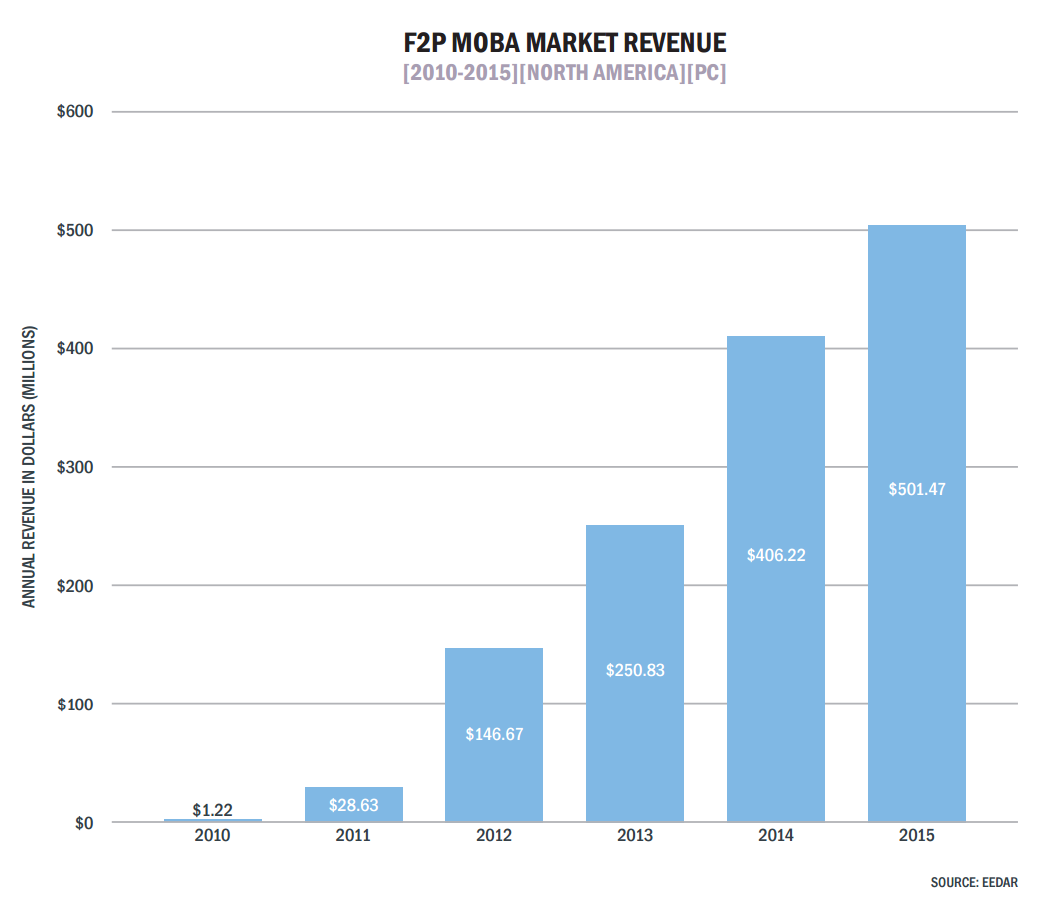 The popularity of MOBA games is immense. Of the millions of people who tried free-to-play games on PC last year, more than half (52 percent) have played a MOBA. That’s enormous.

And the genre is especially attractive to young men. EEDAR found that 74 percent of MOBA players are male, and the average age is 25.33 years old, which is younger than the average free-to-play gamers at 26.37 years old.

Young men, a demographic that is notoriously loose with its cash, is one of the big reasons League of Legends and Dota 2 make so much money. League alone has made around $1 billion each of the last two years. But despite that success, 46 percent of all MOBA players never spend money on anything.

“Much like the mobile market, the revenue from PC free-to-play consumers is heavily concentrated within the top percentage of payers,” reads the EEDAR report. “The top 1 percent is responsible for 15 percent of the revenue while the top 10 percent generates 62 percent of the total.”

So, what do these players spend their money on? Well, mostly items to make their characters look pretty.

“Generally, the largest driver of revenue within the MOBA titles is avatar cosmetics, which include full-body character skins or vanity items for specific character gear slots,” reads the report. “More than a third of MOBA revenues, at 36 percent, is due to Avatar Cosmetics. The next largest revenue drivers were Hero or Champion unlocks, which are a somewhat divisive issue in the genre. Both Dota 2 and Heroes of Newerth, currently the second and fourth largest MOBAs respectively, have unlocked all their heroes for all users. Yet Hero unlocks were still responsible for 20 percent of all MOBA revenues.” 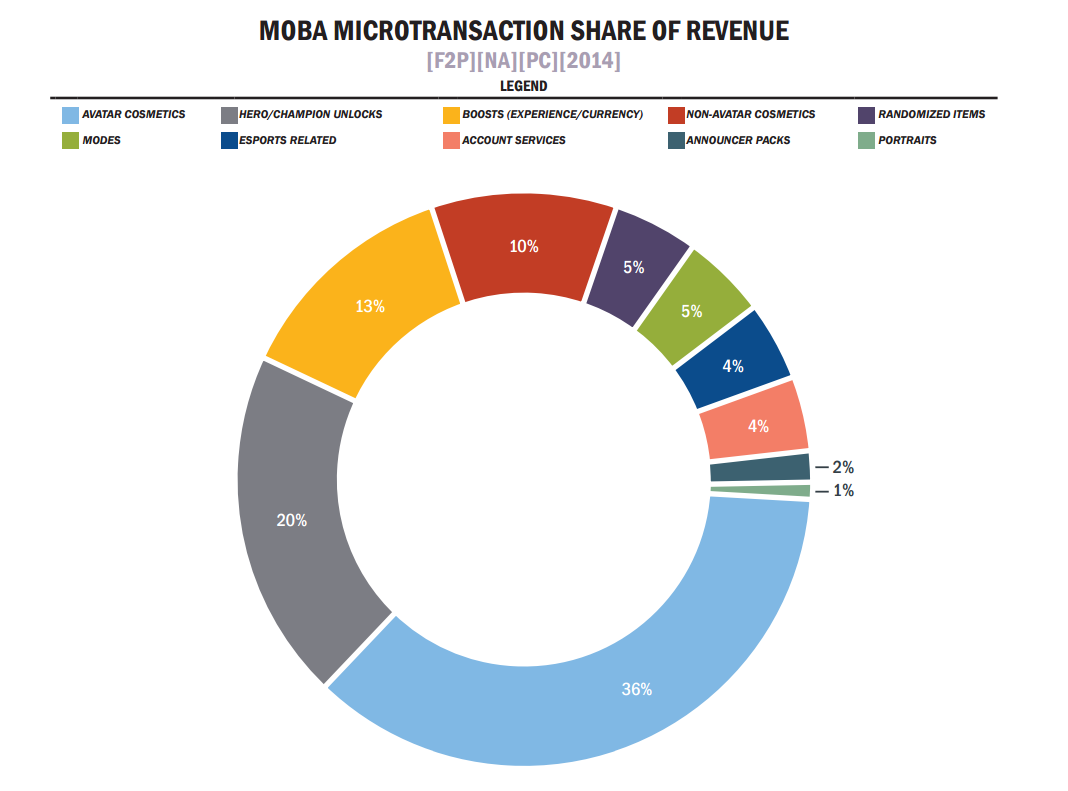 League of Legends locks up many of its characters, but it regularly rotates through them to give people a chance to try before they buy.

After these top earning segments, you have boost items at 13 percent, which increase the rate at which players earn experience or currency. Then cosmetics for things that change the look of a level or some other part of the game make up 10 percent.

The remaining revenue streams, which include new modes, announcer packs, and account services, make up about 5 percent each.

Interestingly, EEDAR has an informative chart that shows not only what types of items and products made the most money, but how much players spent on average throughout 2014 in each area. For example, average spend per paying user for character cosmetics was $24.92 last year. And 41 percent of the entire MOBA audience in North America has made a cosmetic item purchase. 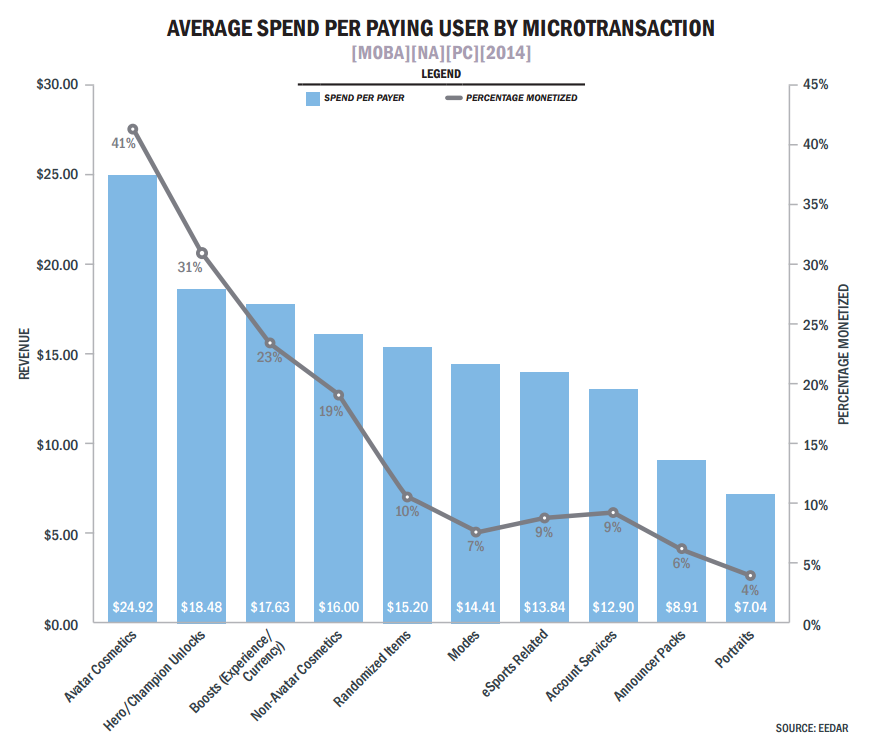 EEDAR went on to break down the various MOBA games by the number of players who have played each:

Finally, the analysts took a look at each game’s strengths and weaknesses. Highlights include League of Legends’ premier e-sports presence as a weakness and its “toxic community” (some players aren’t that nice to others) is a negative. EEDAR lists Dota 2’s steep learning curve as something that might hold the game back. But the report points out that the game leverages the Steam community in a very strong way.