Having originally launched for Mac last year, Techstars alumnus Infinit arrived on Windows last month as part of its mission to create the ultimate file-transfer app. Today, the Paris-based startup launched a version for mobile too, with support for both Android and iOS.

Infinit is entering an already crowded space. There’s certainly no shortage of tools to transfer files from point A to point B — there’s Dropbox, WeTransfer, and email for starters. However, Infinit’s main selling point is that it cuts out the cloud to help you send files across the Internet directly between users — it’s all about peer-to-peer (P2P), and doesn’t require uploading/downloading between servers.

The idea behind Infinit isn’t entirely new — a browser extension called AllPeers closed down back in 2008 because there apparently weren’t enough users to satisfy investors. Infinit, on the other hand, has raised north of $2 million to date, so things are looking rosy so far. 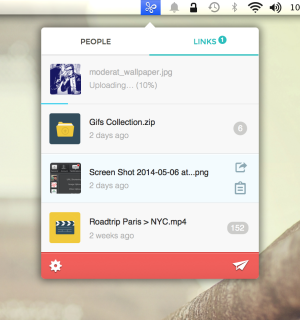 Infinit promises unlimited sizes for file transfers (hence the company’s name) — the only barrier is the speed of the sender and recipient’s Wi-Fi connection. This is why the company has hitherto pitched its application primarily at creatives, those who may need to transfer gargantuan video or audio files. That said, anyone is able to use the service, entirely for free — premium features will be added in the future, which is how the company plans to make money.

VentureBeat has been testing out the app, and it works flawlessly — there are some key features in particular worth noting, ones that have been ported over from the desktop version of the app.

For example, “pause-and-resume” enables a file to continuously transfer even if an Internet connection drops halfway through — as soon as a connection is re-established, the transfer continues.

While creatives are a large part of the company’s target market, during the testing phase for Infinit on mobile, the company realized that its app would likely be used by consumers simply wishing to move media files among their own devices.

“It’s absolutely shocking that Apple, HTC, and even Samsung have invested so much in building such high-quality cameras for smartphones, yet anytime we want to move these files to another device, we’re immediately required to sacrifice their quality,” says CEO of Infinit, Julien Quintard.

While Infinit works similar to Bluetooth in terms of transferring among one’s own devices, there are some key advantages. The Internet offers a faster conduit to transferring files than Bluetooth, while the pause-and-resume functionality means that a file will continue to attempt its transfer, irrespective of any technical glitches that occur during the process.

It’s also worth noting here that Infinit does offer a cloud-based service, for group transfers or for those who don’t have the Infinit app installed.

Infinit certainly offers a compelling proposition, one that could blossom now that it has a presence on smartphones.