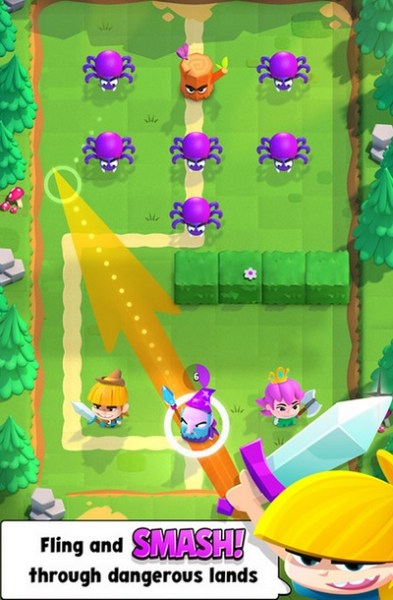 Above: Smash Land is Supercell’s next attempt at a hit.

For most game companies, launching a game is nothing new. But Supercell is a hit factory, partly because it kills a lot of projects before they ever make it into the App Store. The this game has survived the development gauntlet so far says a lot. Supercell’s three major hits are Clash of Clans, Hay Day, and Boom Beach — and each are thriving in a mobile market that could hit $30 billion this year.

Those games have had unprecedented staying power in the top-grossing ranks of the app store, making it seem like Helsinki-based Supercell, which has just around 150 employees, has the Midas Touch. Other game companies would love to have just one mobile hit. The game is available in the Canadian app store, but I’m not sure where else it is now.

Smash Land seems like Monster Strike, and it just made its way into the App Store. It has cartoony graphics. You “smash your way through dangerous lands packed with scary creatures.” You collect heroes with “explosive abilities” and search the world for treasure, according to the description in the App Store.

You can join a team and make friends and enemies. You can also unlock and collect heroes with special powers and abilities, battle in multiplayer mode, team up with others to accomplish goals, discover the best combination of heroes to take down your enemies. The enemies include critters such as “angry mushrooms, poisonous spiders, and thunderous tree stumps.”