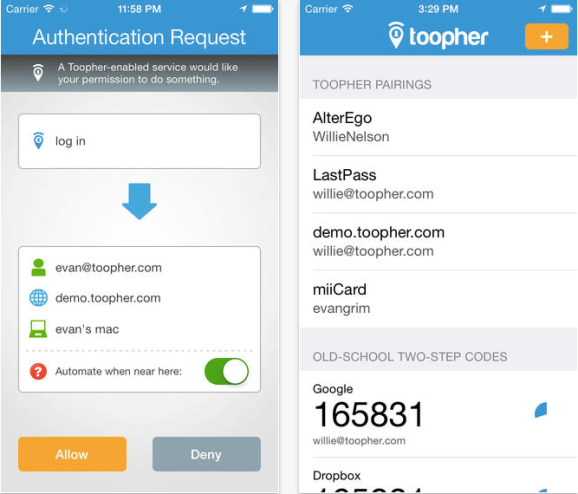 Salesforce has acquired Toopher, a startup that developed a mobile app for two-factor authentication that people can use to successfully log in to web services.

Toopher’s app, available on iOS and Android, could also automatically authenticate people based on their current location.

As part of the deal, Toopher will no longer sell its services, according to a statement that appeared today on the startup’s website.

It sounds like the acquisition could help Salesforce bolster security for users of its mobile apps.

“While we will no longer sell our current products, we are thrilled to join Salesforce, where we’ll work on delivering the Toopher vision on a much larger scale as part of the world’s #1 Cloud Platform,” Toopher cofounders Josh Alexander and Evan Grimm wrote in the statement.

Salesforce confirmed the deal to VentureBeat in an email but declined to provide further information on the acquisition.

“We also support ‘old school’ two-step authentication on Facebook, Google, Outlook, Dropbox, Evernote, or anything marked ‘Software Implementation’ at http://twofactorauth.org,” Toopher stated in the description of its free iOS app on iTunes.

Toopher started in 2011 and was based in Austin, Texas. Alsop Louie Partners invested in the startup.