While other games share similar qualities to the classic action-platforming series, Axiom Verge for PlayStation 4 pays homage to it in both visuals and gameplay. The 16-bit style, the bizarre alien world, huge bosses, and the doors that connect the 700-plus rooms together screams Metroid. That doesn’t mean Axiom Verge is a ripoff. Developer Thomas Happ crafted an original sci-fi story with cool twists and seemingly endless exploration.

Just when I think I’m done with a level, I’ll see an extra set of bricks I can drill through or a secret area I can warp to. Axiom Verge is a phenomenal achievement for its one-man team.

Corrupting the world of Sudra

One of Axiom Verge’s more unusual tools is the Address Disruptor. It shoots out a ray that can remove specific obstacles, but you’ll use it more as a defensive weapon to change the behavior of your enemies (except for bosses). Each creature reacts in different ways — some become even more dangerous — but for the most part, glitching enemies makes them more docile or weak.

When you point the disruptor at a tree-shaped foe that sends out harmful energy clumps, it becomes a block of scrambled textures and pumps out health orbs instead. A small, shelled creature with a red laser attack turns into an ally, shooting out a blue laser that can destroy other enemies or break bricks.

Being able to manipulate parts of the world as you see fit is freeing. It gives you a sense of control and ownership over your gameplay experience. 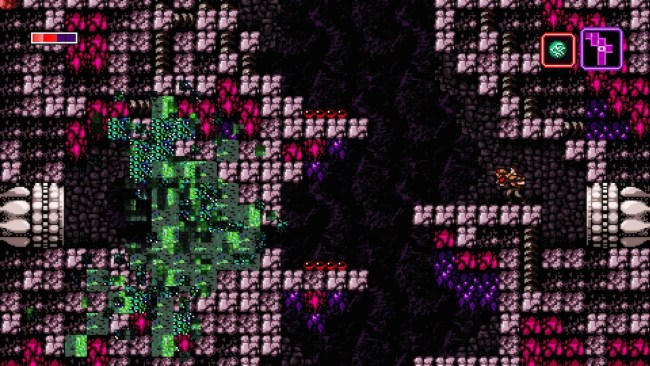 Above: You’ll need a more powerful version of the disruptor to get through this.

Doing something you’re not supposed to

Some of Axiom Verge’s items gave me the feeling that I was doing something wrong or something that Happ didn’t intend for the player to do. It’s weird to think of it like that because he obviously programmed everything. But Axiom Verge maintains a strong illusion that you can actually “break” the game. Take the lab coat, for instance. This allows you to pass between thin walls by double-tapping the D-pad. The animation sequence helps sell that rebelliousness: harsh static sounds and black and white images pop up as you squeeze through the other side. I loved watching it every time.

The drone is also a good tool for exploring areas off the normal path. You send out a bug to crawl through small tunnels (like Metroid’s morph ball). Axiom Verge has plenty of these areas for the drone, but I had a lot of fun with it halfway through the game. A huge gap prevented me from going back to an earlier level. Since I couldn’t make the jump, I ended up running for it and shot the drone to the other side while I was in the air. I was so damn happy when it worked.

My drone had a small health bar back then, so I wasn’t able to do much. But revisiting that level with a weaker character was like a challenge of its own: How far back can I go before it dies? I’m not sure if Happ also had this in mind, but it’s satisfying to think I may have subverted the game in my own way.

A long trail of secrets

Axiom Verge is a haven for players who love to find every little secret in a game. After 25 hours of playing, I discovered just 95 percent of the map and found 14 weapons out of a total of 24. I’m sure I also missed a bunch of health and weapon upgrades. And that’s just the stuff on the surface.

I have no idea what to do with the password system or the notes I found written in indecipherable alien languages. Glitch rooms — special areas meant to evoke the glory days of cheat devices like Game Genie — are hard to find, too. I’d only found one of them by the time I finished the game. 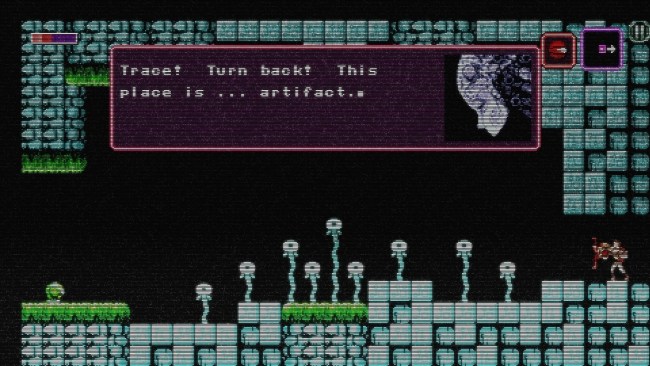 Above: The secret areas have a cool VHS-like filter.

Objectives are too vague or nonexistent

Axiom Verge only has a few cutscenes that tell you where to go. At first, I didn’t mind — getting lost is part of the experience — but the lack of direction became annoying toward the end. When I hadn’t discovered much of the map, it was easy to ignore my frustrations. I was always seeing something new: levels, enemies, perhaps a boss. But once I had seen nearly everything, the search process was way more repetitive.

I was heading to the final boss, but when I got there, I couldn’t move on without using an ability that I didn’t have. It took me a few hours to backtrack through the whole map (my second time doing so), but I didn’t find much other than additional weapons. I couldn’t think of anything major that I missed along the way. So I stopped for a few days while I reached out to people I knew who were also playing the game. The answer was more obvious than I was expecting, but it would’ve taken me hours more to reach that point on my own.

Tough to keep track of where you’ve been

Sudra is an incredibly diverse place to explore. One level looks like the inside of a huge monster’s belly while another contains a glimpse at what the planet was like before an evil force arrived. Despite its variety, I had a tough time keeping track of where I’d been (adding to the hours already spent backtracking). The map gives an overall view of the planet, but it didn’t help much when it came to figuring out specific rooms I was looking for.

Happ was clearly aiming for an old-school vibe with Axiom Verge. I just wish the map had more of a modern update for people like me who easily get lost and end up seeing the same rooms over and over.

Axiom Verge uses Metroid’s building blocks to create a fantastic adventure that can stretch for hours if you want it to … though maybe not always in a good way. I’m not a big fan of the genre, but even I started getting obsessive over my map and item completion rates. I’ll just leave it to the rest of the community to fill in the blanks.

Axiom Verge came out on March 31 for PlayStation 4 for $20. PlayStation Vita and PC versions are also in the works. Thomas Happ Games LLC provided GamesBeat with a digital code of the game for the purpose of this review.