Boys, look who it is! Hearthstone: Heroes of Warcraft’s newest add-on, Blackrock Mountain, gives players a new slew of bosses to fight, each with their own tricks. That’s why we’re here to help.

The adventure starts off with Blackrock Depths. We’ll add a section for each new wing as publisher Blizzard releases them each week. Note that these guides cover the normal versions of each fight, although we do tell you what makes the heroic versions different. 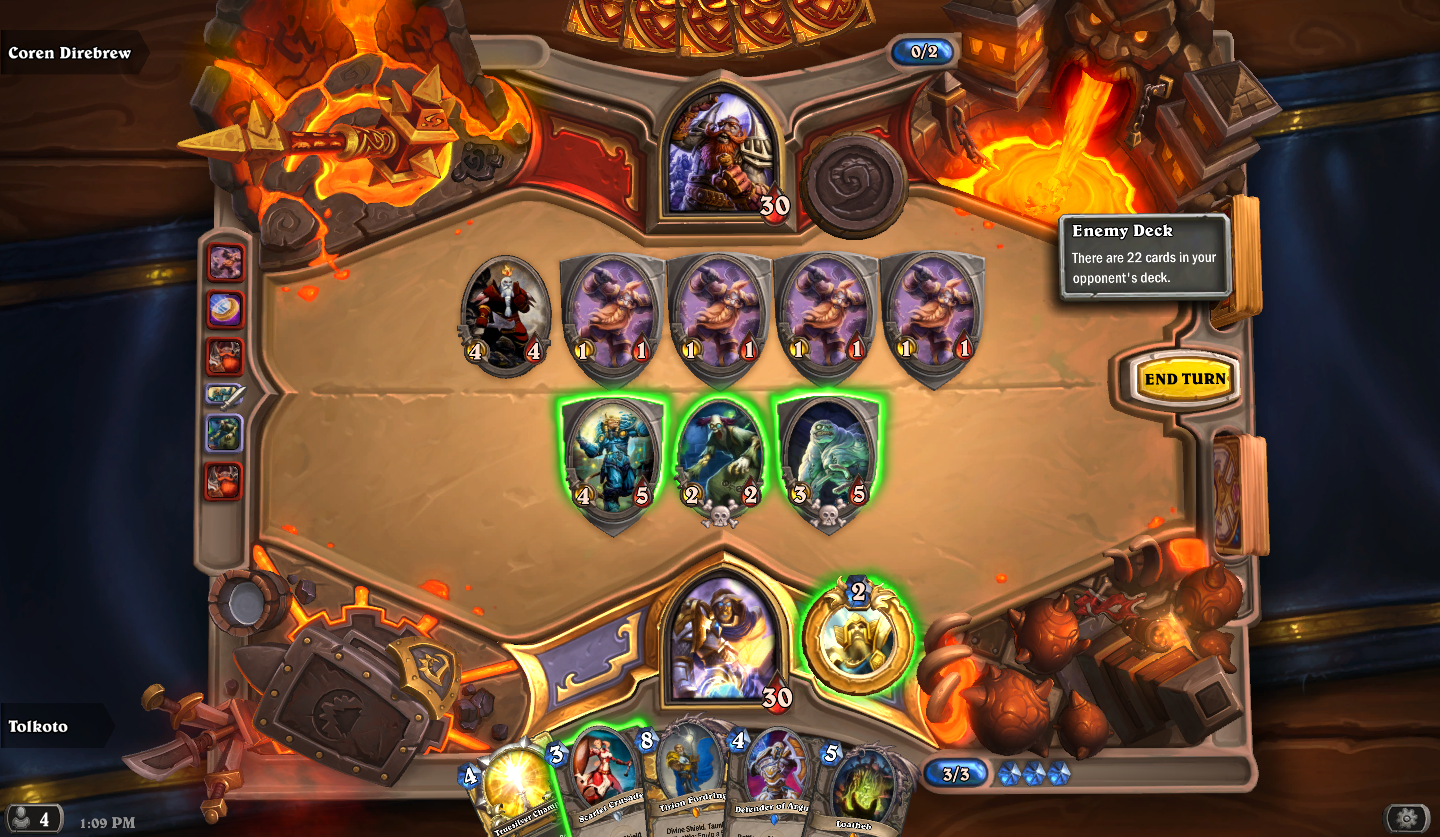 Above: You’ll want an area-of-effect spell to deal with all those weak minions.

The Grim Guzzler
Hero Power: Pile on! (Put a minion from each deck into the battlefield.)

Guzzler’s Hero Power actually puts a minion from each of your decks into the battlefield without costing him any mana. The best way to handle this is to use a deck with a lot of powerful cards. That way, you’ll increase the odds of having a strong card from your deck go into play, making the Hero Power more often beneficial to you.

Guzzler can also use a 3 mana spell called Get ‘Em. It summons 4 1/1 dwarves with Taunt. You’ll want to have some area-of-effect spells like Consecration or Swipe to deal with this ability. He also has a lot of area-of-effect spells and Battlecries himself, so you’ll want to have minions with a decent amount of health that can survive those attacks. Again, it’s best to use a deck with a lot of strong minions.

Heroic difference: Guzzler starts with 15 armor and his Hero Power will put two enemies from his deck on the board. It still just brings one of yours out. Above: Just overwhelm him with an aggressive deck.

This Hero Power isn’t too bad. He’ll just use 1 mana to summon a 1/1 minion with Taunt. However, since you can’t attack the hero while a Taunt is out, you’ll want to get rid of these quickly. That’s why it’s best to use an aggressive deck for this fight with minions who cost a small amount of mana. If you get board control early, this fight will be easy. The Mage’s and Rogue’s Hero Powers work well here, since they can easily dispose of those Spectators.

He’ll summon a lot of Legendary cards, like Tinkmaster Overspark and Illidan Stormrage. However, if you have an aggressive deck, you should be able to either deal with these in one turn or ignore them and finish off the boss, depending on how low his health is. Above: Keep her alive, or you’re dead.

That Hero Power looks scary (it can kill you in one hit for just 2 mana), but you can avoid it completely. He starts with Moira Bronzebeard, a 1/3 minion, on the board. Thaurissan can’t use his Hero Power while Moira is alive, and Moira won’t attack any minions unless they have Taunt. So, don’t play any minions with Taunt, and don’t use any area-of-effect spells that will accidentally kill her. Keep her alive, and you’ll be fine. Yeah, she’ll do 1 damage to your hero every turn, but you’ll just have to live with it.

Thaurissan’s deck is pretty aggressive, with Flame Imps (3/2, but these deal 3 damage to himself) and Fiery War Axes (a 2 attack weapon with 2 durability). He also has Unstable Ghouls, which have Taunt and deal 1 damage to every minion, including Moira, when killed. Make sure you don’t use spells that decrease Moira’s health to 1, like Equality. He also has a 3 mana spell called Flameheart, which draws 2 cards and gives him 4 armor.

Just counter him with an aggressive deck of your own, and try to maintain board control while keeping Moira alive.

Heroic difference: Thaurissan starts with 15 armor, and Moria is a 3/1 minion instead of 1/3