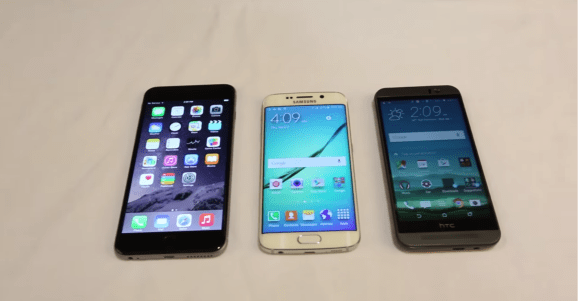 When the iPhone 6 and iPhone 6 Plus were released in September, some owners reported serious bending issues that occurred when they sat down with the devices in their back pocket. The HTC One M9 as well as Samsung Galaxy S6 and Samsung Galaxy S6 Edge are hitting the market this month, so many are naturally curious to see if Bendgate encompasses the Android flagships.

While some did report issues with the iPhone 6, it became common knowledge that the larger iPhone 6 Plus was more likely to bend (probably due to the larger surface area). Both Android devices are big, so extended warranty service provider SquareTrade has decided to put them to the test using its BendBot, which “simulates the forces produced in the average person’s back pocket and shows exactly what happens when up to 350 pounds of force is placed on a phone.”

This was not a comprehensive test by any means. How do the smartphones fare if they aren’t bent at the center? The HTC One M9 would probably still turn on, and we would learn its true breaking point.

Most frustratingly, SquareTrade didn’t test the Samsung Galaxy S6. It’s not too surprising the Edge’s screen breaks under pressure, given that it is curved. Given that the normal S6 is likely to be the more popular device, however, we would rather have had it included in the test.

It’s important to remember that Bendgate began because iPhone 6 and iPhone 6 Plus owners started reporting bending issues. The Android devices still haven’t arrived for most early adopters, so we have to wait to see if any bending happens in real-world environments. Regardless of whether they do, you can expect many more bend tests documented on YouTube.

Update on April 6: Samsung issued a statement in response to SquareTrade’s video.

Recently, there have been several reports about the durability of smartphones stemming from a You Tube video posted by SquareTrade. It shows several smartphones, including the Samsung Galaxy S6 edge, being bent or broken under high pressure. In this video, the Galaxy S6 edge was broken under the pressure of 110lbf (50kgf), but there are two things that need to be addressed with regard to the video.

First, the video assumes a very specific condition – 110lbf (50kgf), which rarely occurs under normal circumstances. The normal force that generated when a person presses the back pocket is approximately 66lbf (30kgf). Our internal test results indicate that the Samsung Galaxy S6 and S6 edge are not bendable even under 79lbf (32kgf), which is equivalent to putting pressure to snap a bundle of five pencils at once.

For this reason being, Samsung will officially deliver our statement to SquareTrade and ask them to conduct the stress test again which targets both front and back sides, and open the test result to the public.

All our devices are put rigorous high-quality validation tests before they are delivered to consumers. These tests include various conditions, such as dropping, bending, and breakage. And we are confident that all our smartphones are not bendable under daily usage.