When Atlus and Spike Chunsoft got together to mash up dungeon crawler franchises Etrian Odyssey and Mystery Dungeon, the companies cleverly combined the best aspects of each series to make a crossover so well done that it should become a new franchise on its own. But the resulting game, the 3DS’s Etrian Mystery Dungeon (read our review here), also blended in every devious tactic and torturous turn they could come up with. It’s as hard as it is good.

Etrian Mystery Dungeon fully embraces the roguelike roots of either of both of its parents. This means that players should expect turn-by-turn, tile-based movement through procedurally generated (aka random) labyrinths packed full of powerful monsters and hidden traps, all while balancing limited resources and a steadily decreasing hunger meter. And death in the dungeon means losing everything.

Yet somehow I’ve managed to live to tell the tale.

This guide provides the tools and knowledge to go boldly into Etrian Mystery Dungeon’s dark and seemingly endless dungeons with a plan to make it back out. It covers preparation, party formation, dungeon-crawling, and even some tips on how to rebuild after you’ve lost it all. Good luck! 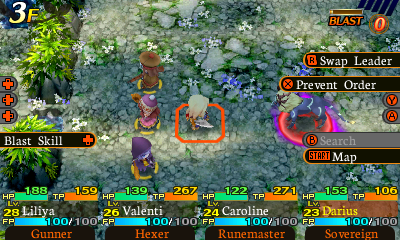 Above: The sovereign brings a royal touch to your party. The class is good at evading attacks.

Etrian Mystery Dungeon has only one way to (try to) cheat, but it doesn’t work. Unfortunately, I speak from experience.

It used to be that you could exploit the harsh penalties of player death in earlier roguelikes by shutting off the game before dying, allowing a player to access a previous save file to start over. In a moment of weakness during a particularly difficult boss battle about halfway through the game, I shut off the game just before dying, hoping for the best. But when I started back up, I was chastised for an improper dungeon exit. I found that I was warped back to town, and that most of my funds, half of my equipment, and all of my items were taken away.

It would have been better for me to stay into the battle, even if I died.

Eat before you go

The Amber Restaurant in town lets you take on new quests, but a submenu there lets you order special meals that give you perks in battle. While the effects are only good for the next dungeon visit, a little extra push in the hit points or magic points department could make a big difference. An inexpensive dinner is just as good as another gained level in many cases.

Don’t be afraid to go solo

While I don’t recommended conquering a dungeon with only one character, you do have some good reasons to take a solo spin. For quick leveling, take a new character into one of the earlier, easier dungeons. Instead of having the experience divided among four party members, that solo fighter will get it all. And for scoping out a new dungeon, the ninja and wanderer classes are great for a quick solo exploration mission; their high mobility and special perks (a ninja can walk on water through one skill) can make quick work of it.

Build up a runemaster

You have plenty of options when it comes to brute strength for party members, but you don’t when it comes to elemental damage and area-of-attack spells. Be sure to take care to level up at least one runemaster for your guild as they become invaluable near the end of the game. You’ll be glad you have a full-powered magic user when you find yourself in a surprise Monster House, as the higher-level lightning elemental spells can both damage and stun a whole lot of baddies.

Random potential allies also roam the dungeons, and you’re able to recruit them into your guild for later use. If you’re lucky, you’ll find a recruit of a high level, saving you the trouble of grinding. Also, pay attention to a recruit’s loadout, as there might be a valuable item you can take from them. You can then send them on their way if they don’t meet your needs as a guild member. 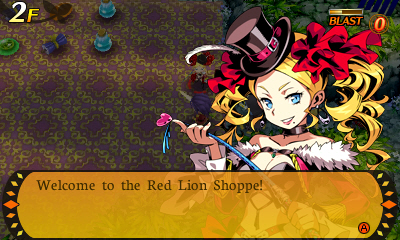 Above: You can also do some shopping in special zones in dungeons.

Take these items with you

You’ll die without food in Etrian Mystery Dungeon. It’s too bad that real life doesn’t feature this game’s real-time hunger counter, which decreases with each step. Once your team goes hungry, they’ll begin to take damage with each step. Bread is cheap — always have at least one loaf on you.

It’s obvious that you’d want at least one of these town-returning magical items in your inventory at all times, but it’s not as clear on where to find them — and you can’t buy them at the item shop. Early on, hunting around the first two dungeons has you finding the rare one among the floor’s loot. When you do find them, be sure to store them at the town’s inn for safekeeping.

Later on, a quest opens up that has you hunting a couple of monster parts to make an Ariadne’s Thread. The monsters are easily found in the earliest dungeons, making this a relatively simple fetch task. What’s great is that you can repeat this quest infinitely.

This expensive item is worth the trouble as it serves as a sort of get-out-of-jail-free card for boss battles. Should you die, you’ll be returned to town with loot intact. The very bottom floor restricts the use of Ariadne’s Thread, so this is the only alternative. 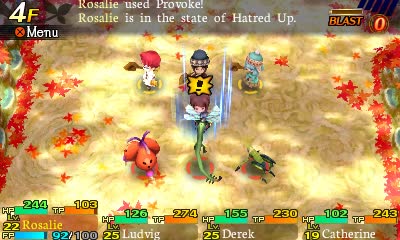 Above: You know you’ve been provoked too much when hatred arises.

Being able to return from death immediately is quite handy in Etrian Mystery Dungeon. This item will automatically trigger when one of your party members die, letting you get right back into battle.

As an alternative strategy for one particularly difficult boss, I came into battle with more than dozen Yggdrasil Leaves, letting the auto-recover action take over for the use of a healer and allowing me to attack on all fronts to take the boss down fast.

You have two good reasons to take money into a dungeon.

First, random item shops pop up in the lower depths, letting you pick up an extra bread loaf or heal potion without having to leave. Having a few extra gold may save your life.

More important, Etrian Mystery Dungeon lets you build forts to keep monsters inside the dungeons and away from town. The stronger the fort, the more it costs. Be sure to take at least the minimum amount needed to build a basic fort, just in case.