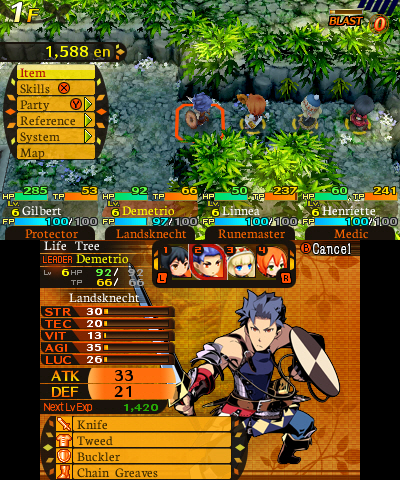 Above: Just a knife? This guy probably isn’t going to live very long.

While you can only control one character at a time in Etrian Mystery Dungeon, you’re free to switch between any of the four party members at any time, which enables some new opportunities for strategy. A simple example would have a player switching from a tank-type character to one of the magic users to capitalize on the elemental weaknesses of an enemy.

But you have other good reasons to switch leaders up, especially when it comes to loot. One particular type of treasure chest features a countdown timer, requiring a character to be on it before its number of turns is up. Switching to a ninja as a leader will let you use one of its fast-travel skills to get the box while the getting is good.

Random hotspots on dungeon floors are colored amber, and passing over them provides some healing benefits. Some refill a point of your character’s food points, letting it go on for additional steps. Others will trigger a slight refill to health or skill points.

It’s a good idea to not march over these points if you don’t immediately need them, especially if you’ve just begun exploring a floor. Save them for when resources get a bit low. I found myself making a mental note of a cluster of amber tiles and then saving them for right before I exited onto the next floor.

Most role-playing games have you working toward the end of the dungeon to fight a final boss. Imagine if additional bosses also roamed around the dungeon. Or worse: Imagine if they could chase you down. That’s what Etrian Mystery Dungeon’s D.O.E.s are.

Don’t take these lightly. If you don’t have enough resources to recover your health, magic, and recovery items during a dungeon crawl, you should run away. Note that heading to a stairway to get to another floor sometimes isn’t enough as the monster can follow you. Sometimes using an Ariadne’s Thread to warp back to home base is all you can do.

Some optional quests ask you to take down a specific D.O.E. Expect to go in at least once for research’s sake, knowing that you’ll die. For that trip, take only the minimum equipment, items, and money. Learn what you can and then return fully armed.

You need to build forts inside dungeons to keep monsters and D.O.E.s at bay. Lower-cost forts are only temporary barriers that you will need to rebuild once an attacker takes it down. Later, after paying to upgrade town facilities, an option opens up to build bigger forts that cover more floors or include direct-to-town warp points. Smart building will allow repeat visits while holding back the enemy. It’s a good idea to defend one of the more expensive forts with a lower cost one, especially if you see that a D.O.E. is lurking on a nearby floor.

Monsters are lurking around just about every corner in every dungeon, but sometimes an unexpected surprise awaits in a few mystery rooms — hordes of monsters. A Monster House will have your party instantly overwhelmed with a room full of enemies, and outside of the use of a back-to-town warp item, you’re stuck fighting.

Start by eliminating the enemies that can cause status damage, as the last thing you’ll want is one or more of your party members incapacitated by poison or confusion spells. Next, use any area-of-effect attacks or spells to start to thin out the crowd, and look for advantageous positioning for some of the special skills that allow attacks across two or more grid spaces. It’s also helpful to throw some status damage-type items out if you have them. Finally, make sure your healer is constantly tending to the group.

While there’s plenty of time to do what you need to do in dungeons, you shouldn’t take too long as fog will eventually roll in and kill you. Keep moving! 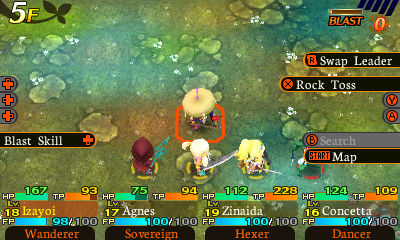 Above: The wanderer class is a great choice for getting around dungeons quickly.

Having lost your equipment, you won’t be able to return to the dungeon you just died in. But it’s less of a problem to go bare-handed into the first couple of dungeons, where the enemies are of a lower level and items are easier to come by. Even by the fourth or fifth dungeon, your attack power should be high enough that going in naked should be OK.

A side bonus is that the first couple of dungeons have higher occurrences of some of the best items, like the Ariadne’s Thread, as well as higher counts of equipment chests. Use this to stock up while rebuilding.

It only takes a couple of deaths to learn that it’s not worth returning your inventory and characters to their former level of equipment and item riches. Yes, you lost a lot. But you likely lost some stuff you’ll never use, too. Going in lean makes it hurt less when you’ve lost it all.

Dont’ hoard. You should sell everything you think you won’t use for extra cash. I found that there were several non-equippable items I held onto that I never used. I would have been better off selling them to earn funds to buy better weapons and armor.

While you’re marching through low-level dungeons in an effort to rebuild and stock up, you’ll have plenty of time to think about why you died. The levels gained during this time will likely net each character a few more skill points. Use those wisely’ dumping the points into skills that will let you specifically address whatever weaknesses had you dying in the first place.

Let the town be

If a D.O.E. makes it out of the dungeon and into town, it will destroy one or more of the facilities you use to prep for battle. You’ll find that the cost to rebuild is so high that it’s basically impossible — one attack had a cost of almost 90,000 gold assigned to the town’s inn.

Forget about trying to gather the funds. Just start the process of rebuilding your equipment and party and the town will recover on its own.

It’s understandable that having to start all over after being kicked out of a dungeon following a 20-floor trek would be frustrating, especially when you find that most of the money, weapons, and items you’ve collected are now gone. Calm down — don’t snap that 3DS in half. Remember that you’ve learned all about the dungeon’s monster types, and hopefully you’ve built a fort or two to return to. It’s going to feel great when you finally finish that dungeon.