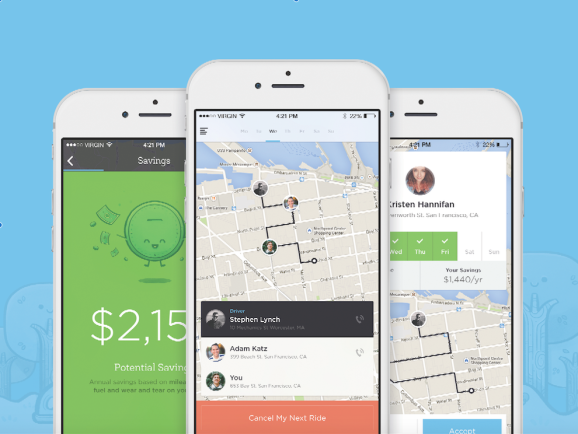 Just as Lyft, Uber, and other ride-hailing services are taking flight, a new service is emerging from beta to connect businesses with a new app so that employees can carpool to work.

Called Ride, the company is owned by TPG Capital and has former Uber CTO Oscar Salazar among its executive ranks.

The mobile app helps employees connect with one another to save money on their daily commute. It also has the added effect of taking cars off the road, so that at a large scale Ride could help alleviate throttled traffic.

“Companies that are interested have a lot of people who have an arduous commute of 30 minutes or more, have parking lot pressure, and a sustainability goal,” said Ann Fandozzi, CEO at Ride.

Since the service is available through an employer as a perk, you’re only ever dealing with people within your company — not random drivers. Commuters download an app and fill out a quick survey to determine whether they should be a passenger or driver, a categorization that’s determined by the days that you work, what time you arrive and leave, and where you live.

As a driver, the app makes lots of recommendations, like if you drive six minutes out of your way every morning you can pick up another passenger, which will then reduce the cost of your overall trip. Ride also arranges for payment between passenger and driver. Passengers pay per trip, and cost is determined by the distance of the trip and geographical location to calculate gas costs.

If you’re really into carting around your fellow employees, Ride will give you a car so that you can maximize the number of people in your car. For instance, if you drive a five-passenger car but are willing to drive a few more people to work, Ride will give you a minivan or SUV. The car upgrade is thanks to a partnership Ride has with GM.

It’s an interesting take on ridesharing, and while there are similar products on the market, none of them leverage businesses quite in this way. For example, BlaBlaCar and Tripda both help travelers to hitch a ride for longer drives, but ultimately they’re connecting random passengers and drivers.

With Salazar at the helm and major corporate partnerships under its belt, Ride stands to capture an audience in an otherwise crowded market.