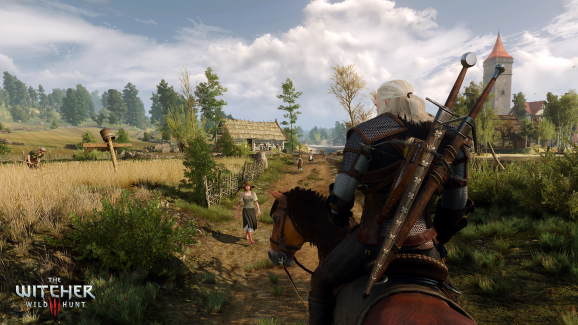 The Witcher 3 is promising a ton of content, but you can buy more even before it is out.

Games are expensive to make, and the people paying those bills aren’t afraid to squeeze excited gamers for a few extra bucks.

That’s what is happening with The Witcher 3: Wild Hunt, a mammoth role-playing game that launches May 19 on PlayStation 4, Xbox One, and PC. Developer CD Projekt Red just announced that it’s working on two expansions for the game that will offer around 30 extra hours of content. You can, of course, wait until they launch before you buy the add-ons, or you can buy them right now in a bundle as part of The Witcher 3’s “Expansion Pass.” For many people, it might seem a bit early to reveal bonus content for a game that isn’t even out — so it’s probably also a bit early to decide whether or not you should buy that stuff. And even CD Projekt Red agrees with this skepticism.

“While we’re offering the expansion pass now, we want to make one thing clear: Don’t buy it if you have any doubts,” CD Projekt Red cofounder Marcin Iwiński said in a statement. “Wait for reviews or play The Witcher and see if you like it first. As always, it’s your call.”

While more content is always great, many people would probably prefer that extra content get included on the $60 disc. That’s especially true when developers are announcing it before the base game is even out. But announcing downloadable content prior to release is a standard practice for developers and publishers these days. It’s a way to potentially make more money from each gamers. We’ve seen this sort of DLC season pass since games like Rockstar’s L.A. Noire in 2011, and it continues today with major 2015 releases like Mortal Kombat X, Battlefield: Hardline, and Dying Light.

For CD Projkect Red’s DLC, it is calling the first expansion Hearts of Stone. It is a 10-hour mystery where players must complete a contract for the enigmatic Man of Glass. The second is Blood and Wine, and it is a 20-hour adventure that will take players to a new region where peace and “carefree indulgence” hides something nefarious.

Many critics of this kind of DLC — the kind that developers clearly have planned before releasing the game — say that this is content that the studio would likely have included in the base game. But in order to make that extra cash, the developer lopped it out to sell it separately. Game creators almost always deny this.

CD Projekt Red is asserting that it has finished The Witcher 3, and it is only now getting to work on the two expansions.

“With the development of Wild Hunt coming to an end, the team has embarked upon the creation of two new really big adventures set in The Witcher universe,” Iwiński said. “We remember the time when add-on disks truly expanded games by delivering meaningful content. As gamers, we’d like to bring that back. We’ve said in the past that if we ever decide to release paid content, it will be vast in size and represent real value for the money. Both our expansions offer more hours of gameplay than quite a few standalone games out there.”

Statements like that don’t always change the popular perception among gamers that this is content that the developer should include on the disc. But publishers are willing to risk alienating some fans because of the increased chance that when people go to buy something like The Witcher, they may opt for the “Special Edition” that comes with a pass for all the DLC at a premium price.

Excitement for a game is almost always highest before it debuts, and that’s likely where publishers and developers can get the most buyers for DLC.

Not all major releases with downloadable content are like this. For example, months after launching Mario Kart 8 in May 2014, Nintendo revealed it was starting to work on downloadable content. This included new tracks and characters. The publisher explicitly said that it only just started working on the content, and so it would take months to finish. After making the announcement in August, the company released the first DLC pack — featuring characters like Link and Cat Peach — in November. It plans to release the second DLC pack next month, which is a full year after Mario Kart 8 debuted.

While many fans prefer Nintendo’s take on DLC, publishers seem to prefer to get the money up front. And The Witcher 3’s method is likely here to stay for that reason.