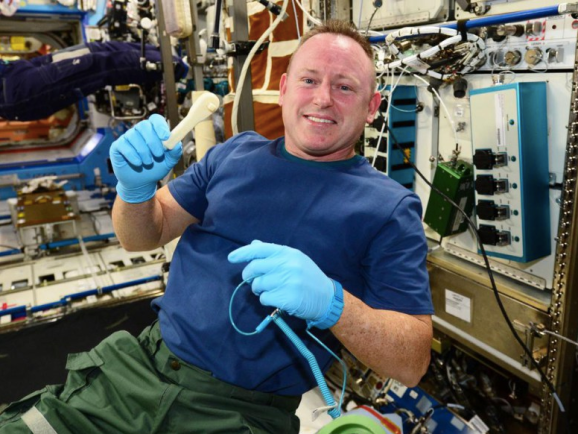 International Space Station commander Barry Wilmore with a 3D-printed socket wrench made from a file NASA emailed into space.

Everyone likes an unboxing video. Especially when what’s in the box is the set of the first-ever parts 3D-printed in space.

Today, NASA released a video showing the unboxing of 21 parts that were 3D-printed on the International Space Station.

“The items were manufactured as part of the 3D Printing in Zero-G Technology Demonstration on the space station,” NASA said, “to show that additive manufacturing can make a variety of parts and tools in space. These early in-space 3D printing demonstrations are the first steps toward [a] print-on-demand ‘machine shop’ for long-duration missions and sustaining human exploration of other planets, where there is extremely limited ability and availability of Earth-based resupply and logistics support.”

In an interview last month, NASA principal investigator Quincy Bean told VentureBeat that once the 21 3D-printed parts finally made their way to the Marshall Space Flight Center in Huntsville, Ala., they would each be photographed and put through a structured light scan, as well as several other tests, so that researchers can compare them against an identical set printed on Earth for volume and geometric discrepancies.

The 3D printing technology NASA is using was developed by Made in Space, a Silicon Valley startup. Among the most high-profile aspects of the project was one in which Made in Space emailed astronauts a file containing the 3D model for a wrench, allowing them to print it on the space station.

The goal, Bean continued, is for NASA to develop a database of mechanical properties to see if there’s any difference in mechanical strength between identical items made in space and on Earth.

During the interview last month, Bean said that while NASA didn’t yet have any hard data, there had been initial indications from videos made on the space station, that the plastics used in the 3D printing there had “adhered differently” than those in the terrestrial test. “The astronauts trying to get the parts off the plate,” Bean said, found that the plastic “seemed to be a little more stuck than on the ground.”

He said that while it was too early to tell if that was actually true, his guess was that if so, “it may be due to a lack of convection in zero-gravity.”

Still, in the end, Bean said he wasn’t expecting there to be many differences between the two sets of parts. If so, that would be very helpful as NASA and partner space agencies around the world prepare for a future in which astronauts can print some of their own replacement parts on the space station.

“It would open the door for being better able to predict and verify and also to certify the parts that would be build in orbit,” Bean told VentureBeat. “Ultimately, the goal of the project is to have this capability … for astronauts to manufacture parts when they need them, whether on the Space Station or on the next mission … to Mars, the moon, or wherever they want to go.”