Among Amazon Prime subscribers, Netflix is still king, according to new statistics.

Since Amazon started offering video streaming and original content through its Prime subscription, many have wondered how much the Everything Store is eating into Netflix’s user base. While we still can’t know the level of impact that Amazon has had on Netflix, we now know that even Prime subscribers prefer Netflix for catching flicks. 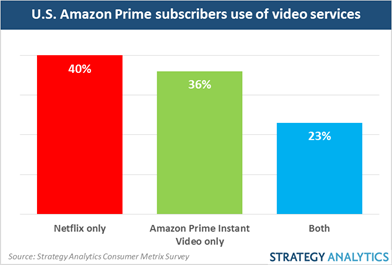 Amazon isn’t lagging behind so far that these numbers are massively indicative of anything other than that most Prime subscribers focus on its other features — like two-day shipping, access to free music, and cloud storage for photos.

Plus, those video-watching preferences may be specific to consumers in the U.S. Strategy Analytics says Prime Video is more important to audiences in the U.K. and Germany, where over 50 percent of Prime users watch videos on Prime more than once a week.

Though Netflix may still be the video-streaming service of choice for many, Amazon stands to offer a lot more to its users. As Amazon builds out its video offering, it could pose a significant threat to Netflix down the line.