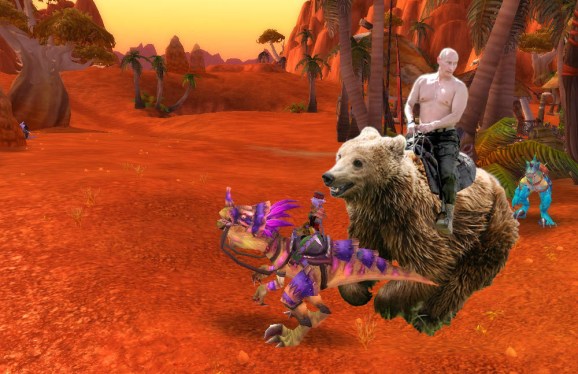 Vladimir Putin riding his mount in World of Warcraft.

Shaky international relations is preventing Crimeans stuck between Ukraine and Russia from playing some of the most popular games in the world.

Last year, United States President Barack Obama issued an executive order that limited the business that U.S. companies could do in Crimea. This was part of an effort to indirectly punish Russia and its economy for invading the territory and annexing it from Ukraine. This led to corporations like Apple and Google pulling all of their services from the region, and now game publisher Blizzard has done the same. Crimean game fans can no longer log into their accounts for World of Warcraft, Hearthstone, Diablo III, and more.

“In accordance with current trade regulations relating to the region of Crimea, we are legally required to suspend access to your Battle.net account,” reads a Blizzard notice to players in the region, according to Russian gaming site Geektimes.ru.

A gaming company having to pull out of Crimea exemplifies the seriousness of the sanctions. For example, Blizzard is completely free to do business in China despite a handful of U.S. embargoes that prevent weapons companies from doing business with that nation. But the World of Warcraft publisher previously had to stop doing business in Iran because of similar U.S. sanctions.

Blizzard isn’t the only gaming company to have to stop doing business in Crimea. Valve, which runs the Steam PC digital-distribution platform, ended operations in the region earlier this year.

This is all the fallout of Russia’s March 2014 invasion and annexation of Crimea. While the international community recognizes this territory as part of Ukraine, Russia had its military intervene to take it over. This is widely seen as a preemptive attempt to gain wider control over the region as Ukraine attempts to strengthen its ties with Western countries by joining the European Union.

Ukraine, the North Atlantic Treaty Organization (NATO), and the United Nations have all come out to call the annexation an illegal act.

While the Western world was in agreement that Russia was not in the right, it limited its response to sanctions that primarily prevented people and companies from doing business that would go through certain Russian banks and oil companies.

“These actions, in close coordination with our EU and international partners, send a strong message to the Russian government that there are consequences for their actions that threaten the sovereignty and territorial integrity of Ukraine,” reads a U.S. State Department announcement from March 2014. “The United States, together with international partners, will continue to stand by the Ukrainian government until Russia abides by its international obligations. The United States is prepared to take additional steps to impose further political and economic costs. A secure Ukraine, integrated with Europe and enjoying good relations with all its neighbors, is in the interests of the United States, Europe, and Russia.”

While this is manifesting itself as a block on World of Warcraft for gamers, it’s also hurting the wider Russian economy. The Russian currency, the ruble, is worth only about 2 cents in U.S. dollars. That’s its lowest value in years. According to a PBS report, these sanctions are preventing the Russian government from pulling out of a recession that is also the result of falling oil prices (a huge part of the Russian gross domestic product) along with corruption and the “bad economic policies” of Russian President Vladimir Putin.

Russia’s credit rating is now only one level above “junk,” which is the lowest that these ratings go.