SAN FRANCISCO — Where was Erlich?

Many of Silicon Valley’s elite turned out out for Wednesday night’s premiere of season two of HBO’s satirical tech-industry comedy Silicon Valley. And while almost the entire cast was on hand to help promote the show, one actor was very conspicuously missing: T.J. Miller, who sparked controversy in February with a performance as host of the Crunchies that some saw as misogynistic.

Miller plays Erlich, the iconoclastic cofounder of Pied Piper, the fictional compression company at the heart of the Silicon Valley. As host of the Crunchies in February, the awards show that fetes the tech industry’s best and brightest, Miller got plenty of laughs, and eventually the hook, for a routine that leaned heavily on jokes at the expense of at least one woman in the audience.

Wednesday night, while each of the other Silicon Valley stars — Thomas Middleditch as Thomas; Martin Starr as Gilfoyle; Kumail Nanjiani as Dinesh; and Zach Woods as Jared — showed up for a two-episode premiere and cocktail party, Miller was nowhere to be seen. 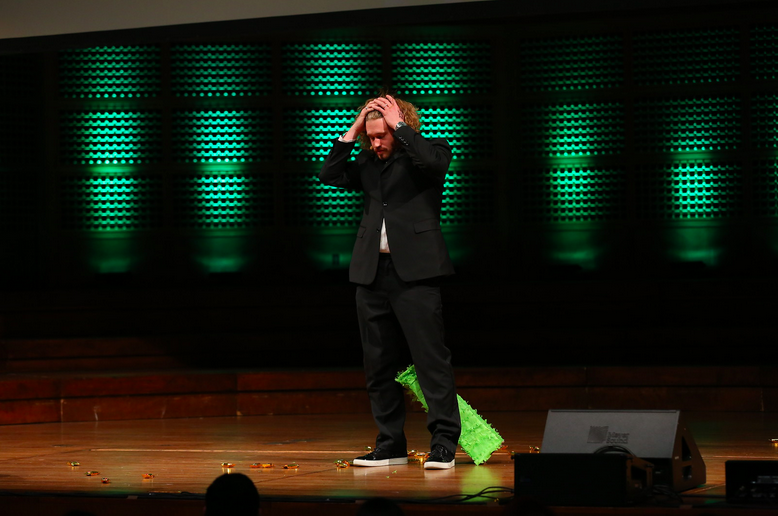 Above: T.J. Miller, hosting the Crunchies in February.

The official line was that he was on vacation in Japan.

But to anyone on hand at the Crunchies in February, it seems much more likely that Miller had no intention of showing his face and confronting direct questions about his Crunchies performance, during which he consistently tossed out sexist remarks aimed at a woman near the front of the auditorium.

Even Kara Swisher, the Re/code editor who moderated a post-premiere conversation with the show’s creators and cast Wednesday night, quipped, “We’re so sorry [Miller’s] not here to call us bitches.”

That reference, for anyone who paying attention, was to one of Miller’s many failed attempts at gender humor at the Crunchies.

The lines drew gasps, and some laughter. But afterwards, plenty of derision. Among the most pointed was from Twitter’s Katie Jacobs Stanton, who penned an essay entitled “My first and last time at the Crunchies.” In it, she wrote that she had originally intended to bring her daughter to the awards show, but hadn’t. “Thank goodness she couldn’t come, because I would not have wanted her to see what unfolded during the evening,” Stanton wrote. “Miller, a star of the show ‘Silicon Valley’ (which I watch and love), threw out a bunch of playful zingers in his opening act. But then at one point, he engaged with a woman (Gabi Holzwarth) a few rows in front of me by calling her a ‘bitch.’ She responded incredulously, ‘Did you just call me a bitch?’ He then said, ‘Bitch, Asians aren’t supposed to be this entitled in the U.S. … Is this bitch from Palo Alto?'”

Several days after the show, TechCrunch COO Ned Desmond apologized for Miller’s performance. “The use of derogatory slang to refer to women or minority groups is unacceptable at any event TechCrunch runs, period,” Desmond said. “And we know many others feel the same way, even if it’s hard to find the words to say so. We’re sorry. …We won’t be asking T.J. back next year, and we’ll be thinking hard about the steps we can take to improve the experience for everyone across the program.”

Wednesday night in San Francisco, Miller was scarce. Maybe he was on vacation, as HBO said. Maybe not. Maybe that vacation was timed so that he wouldn’t have to face the scrutiny of a press corps that would no doubt have grilled him about his February performance. Too bad we didn’t get that chance.

Oh, and the show? Not bad. It premieres on HBO this Sunday, along with Game of Thrones season five.