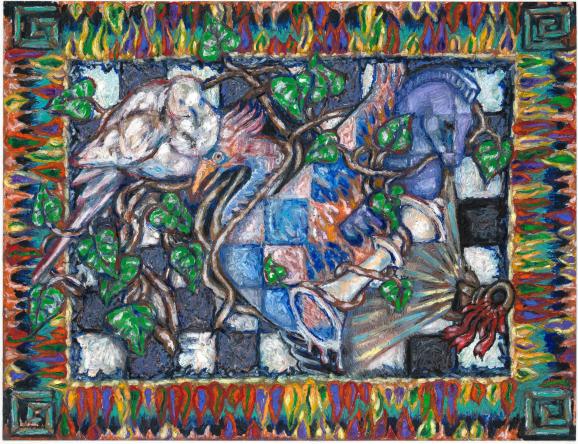 Earlier this month, Christine published her third Bitcoin puzzle painting with this challenge: “The painting is a #puzzle, there is 4.87 #bitcoin concealed by this image. Happy #EasterEgg.”

I’m not sure “happy” is the word that the multitude of treasure hunters would use to describe their efforts to unlock the secret and claim the Bitcoins. But it has once again become a massive obsession for many searchers. Just scroll through this thread on Reddit dedicated to solving it, or this one on Bitcoin Talk.

The prize is worth roughly about $1,400, but that doesn’t really justify the huge time investment to solve it. Clearly, being part of the challenge and an obsession to solve the riddle are a reward unto themselves for many participants.

This is the third Bitcoin puzzle in a series called “The Legend of Satoshi Nakamoto” (the name or pseudo-name of the person credited with creating Bitcoin).

Christine is the lead of the project, and this time around she created the cryptographic puzzle with the help of three other team members: Rob Myers, an artist and programmer based in Vancouver, B.C.; Ruben Alexander, a graphic designer based in Massachusetts; and Tyler, a nano-materials engineer based, like Christine, in North Carolina.

If you want to get a sense of just how complex the puzzle is, and how much work goes into creating it, then I suggest you (try to) read the 32-page explanation for the solution to her last piece.

I reached out to Christine, 29, to ask her why she creates these pieces and what inspired her. In an email exchange, she said the project came out of her growing involvement with the Bitcoin movement.

“I’ve learned about cryptography gradually, beginning with trying to understand Bitcoin in 2013,” she said in an email exchange. “However, I’ve always been fascinated by machine learning and pattern recognition.”

The more she connected with other Bitcoin community members, the more inspired she became to reflect that in her art.

“I found myself making this work from a progressional level of involvement in the Bitcoin community,” she said. “First, I was doing freelance work for emerging startups. Then I found myself making friends with the folks at the relative media outlets and started making portraits.”

But while the painting is the end result, it is only the very last stage of her own work, a process she’s found every bit as thrilling as the art.

“Scheming the artwork, the stories, the trail is probably as addicting as playing them,” she said. “Mystery has always intrigued us, art on its own is a cryptic puzzle, but what happens when we combine art that literally conceals the patterns and data that lead to money? I wanted to find out.”

Still, she was surprised by the degree to which her own growing obsession with Bitcoin, cryptography, and art seemed to resonate with others.

“The response has been astonishing,” she said. “I honestly wasn’t prepared for how many people took to it. It was staggering. I also didn’t anticipate how emotionally attached people would become to the puzzles. People made friends and formed teams, there was a range of personalities who morphed into characters within the pages of the forums. The puzzle evolved into an emotionally saturated adventure novel.”

In an email, deCourcelle said he decided to get involved because he felt it would help spread the word about Bitcoin.

“I believe there are new, innovative ways we can educate the public regarding Bitcoin, cryptography and blockchain technology,” he said.

Alexander said he contacted Christine after becoming hooked by reading the 32-page solution to the last puzzle.

“I’ve seen the first examples of cryptocurrency visual art on bitcointalk, reddit, and from http://cryptoart.com,” he wrote in an email. “Bitcoiners definitely challenge my definition of what art is with some of the funnier pieces being made in mspaint (e.g. magic internet money wizard).”

“My background is in art and code so this project was very much in my main line of work,” he said. “It was a good way to put what I’ve been learning about cryptocurrency into practice.”

There is no deadline for solving the puzzle. Meanwhile, Christine said she’s already working on her next Bitcoin art.