It’s time to continue our adventure through Hearthstone: Heroes of Warcraft’s Blackrock Mountain!

This time, we’re looking at the bosses of Molten Core. They’re tricky, but don’t worry! Our guide will help you beat all of them. 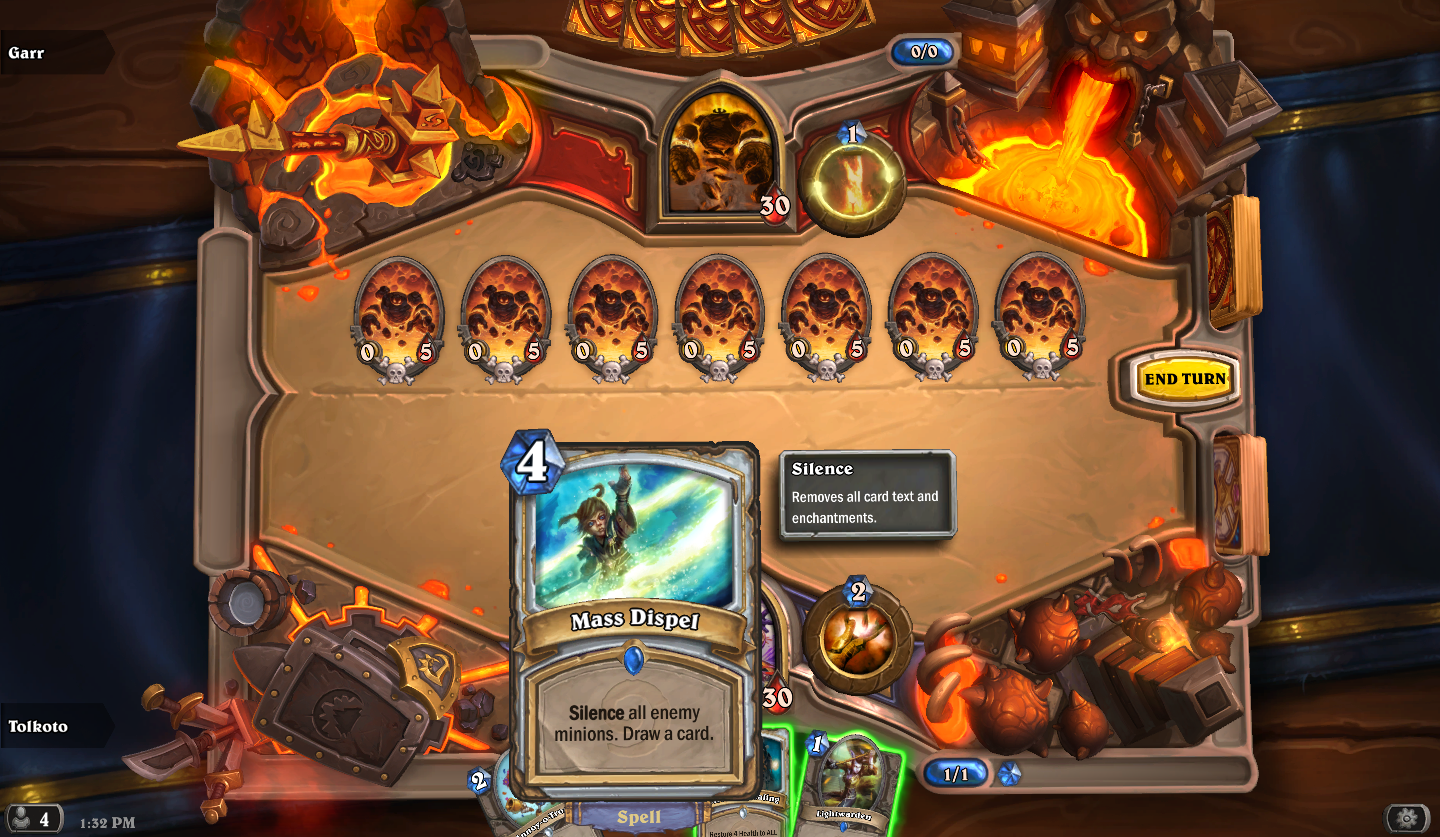 Above: Dispel those fools!

Magma pulse costs Garr 1 mana to cast. He starts with seven Firesworn on his board. They’re 0/5 minions, but their Deathrattles will deal 1 damage to the enemy hero (that’s you) for each Firesworn that died that turn. So, you don’t want them all to die at once, or you’re toast. Garr can use his hero power every turn and kill them all by his Turn 5.

You’ll want to try to slowly clear out the Firesworn, taking out just one or two a turn. Using an aggressive deck with fast-acting and cheap minions could work, but make sure they have more than 1 health, or else Magma pulse we’re clear them out quickly.

You can also use cards that will Silence minions. This will get rid of that nasty Deathrattle. The Priest’s Mass Dispel, which Silences all enemy minions for 4 mana, is fantastic here. For extra fun, play a Lightwarden (which gains +2 attack every time a minion is healed) and a Circle of Healing, which heals all minions, including those Firesworn. I was able to use a couple Circle of Healings and got a Lightwarden up to 37 attack.

Heroic difference: Garr starts with 45 health and the Firesworn now do 3 damage for each Firesworn that died that turn. 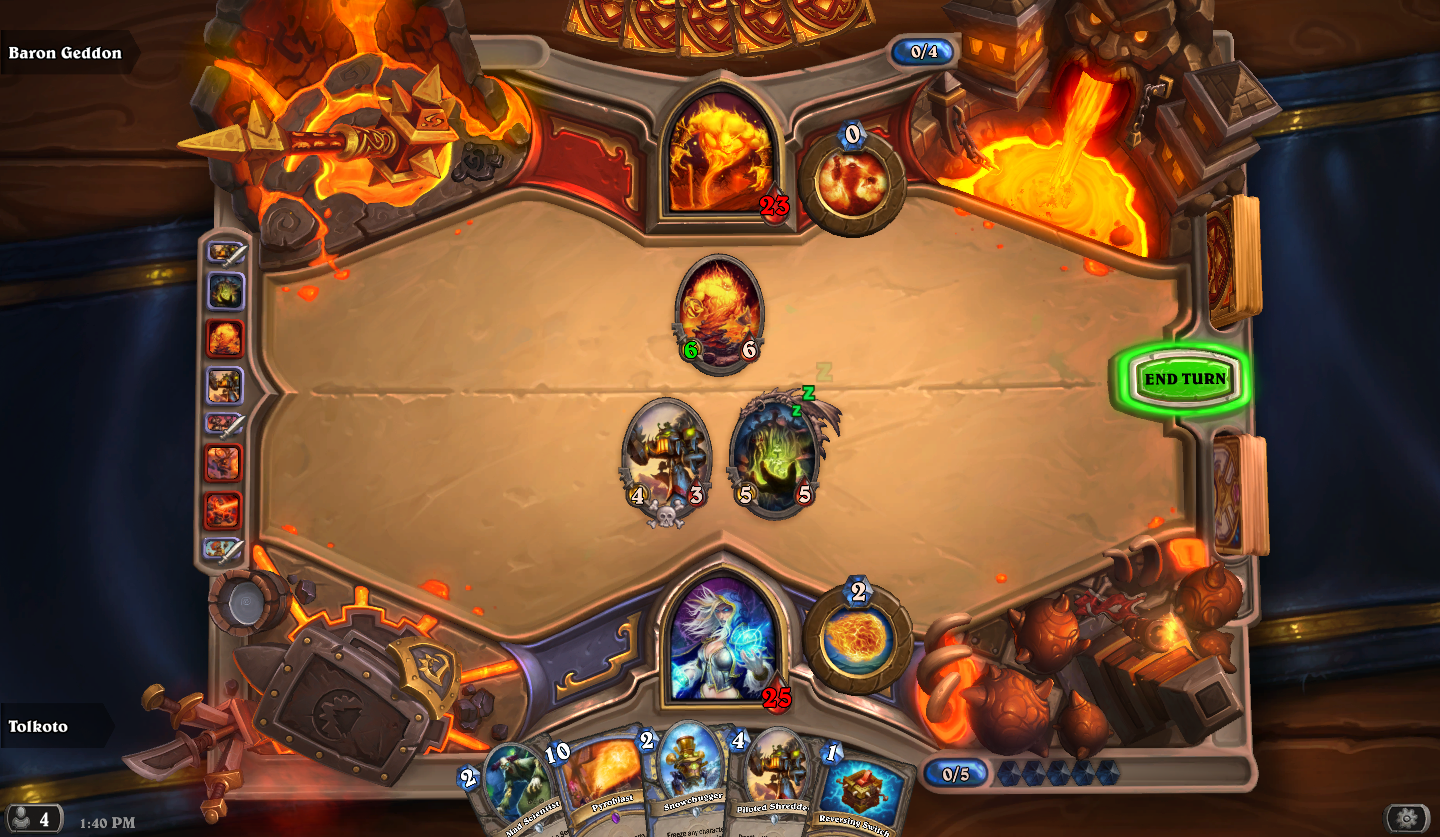 Above: Use up all that mana.

Hero power: Ignite mana (Deal 5 damage to the enemy hero if they have unspent mana).

Ignite mana costs Baron 0 mana to cast, so make sure you don’t give him the opportunity. Play a deck with a lot of cheap cards (especially ones that cost 1 mana) to make sure you don’t leave any excess. Be sure to use your Hero power if it helps. Watch that you have enough cards to play, too, or else you’ll find yourself in situations where you don’t have enough to play to use up all your mana.

Overall, this fight is pretty easy, especially compared to the intricate Garr. Just don’t leave extra mana, and you should be safe.

Heroic difference: Baron will now do 10 damage to you if you have any unused mana. He starts with 50 health and 50 armor. 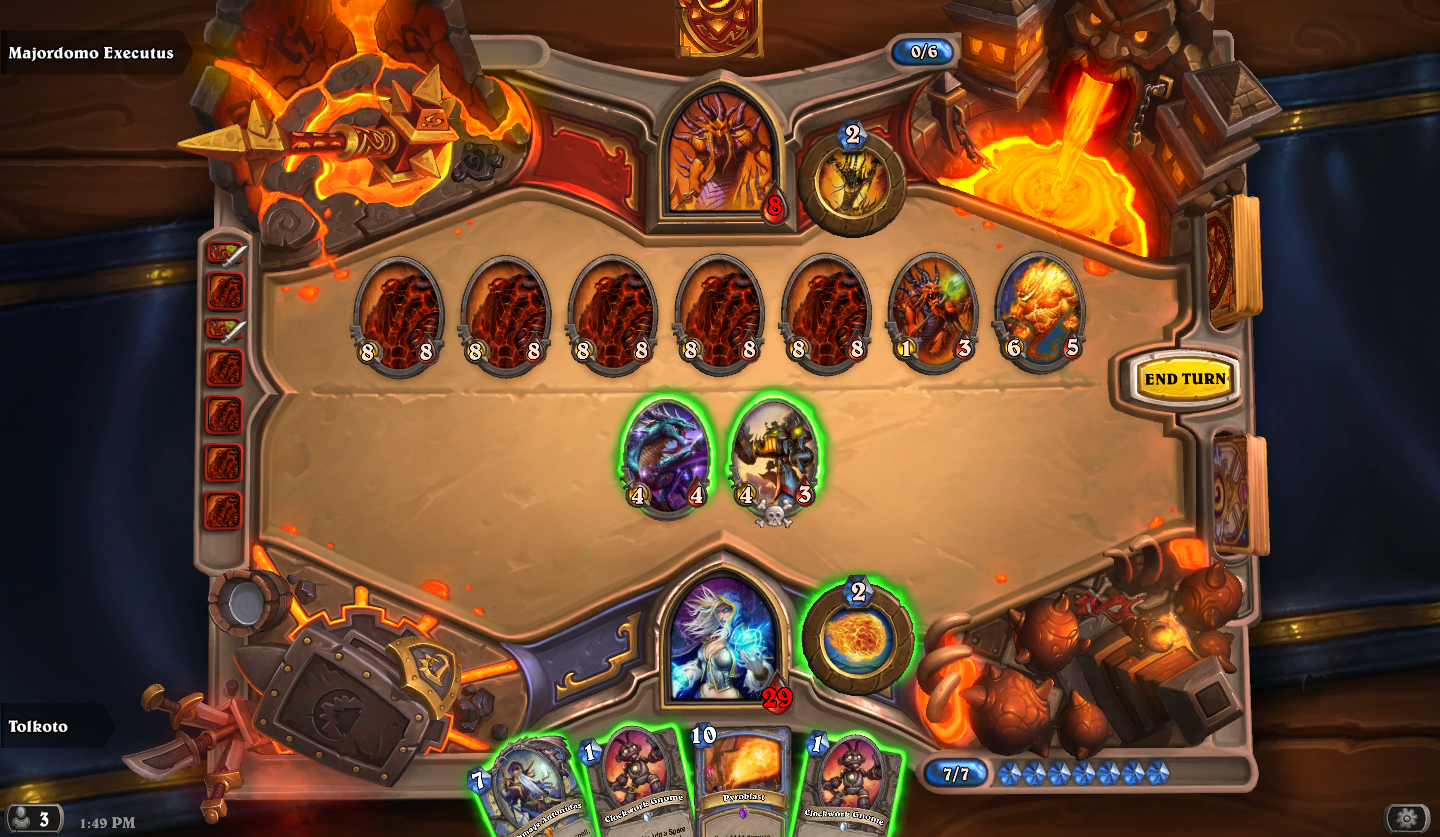 You have to beat Majordomo before you can reach Ragnaros. Luckily, Majordomo isn’t too tricky. His Hero power summons a 1/3 minion for 2 mana. They aren’t huge threats, so you can ignore them. You’ll actually want as many of them on his board as possible.

Once his health is low enough (around 10), he’ll flood his board with Molten Giants. This is why it’s a good to keep his weaker minions alive. Better to have them filling up his board than extra Molten Giants. After killing him, he’ll turn into Ragnaros.

Ragnaros starts with 8 health and 8 armor. This fight starts immediately after beating Majordomo, so you’ll have the same cards, health, and everything — the state stays the same after you defeat Majordomo. This means that all of those Molten Giants will also still be on the board, so hopefully he doesn’t have enough to take you out in one turn.

His Hero power deals 8 damage to a random enemy (you or one of your minions) for just 2 mana. Try to have as many minions on your board as possible. That’ll lower the odds of the attack hitting you.

Basically, this fight is a race. You need to kill Ragnaros before he overwhelms you. Just make sure you don’t take Majordomo to 10 health until you’re ready, either by having a board that can kill Ragnaros quickly or by taking care of the Molten Giants first. Having some strong damage-dealing spells, like the Mage’s Fireball, can be a big help. You’ll only have a turn or two to take him down. You might need a little luck on your side, so don’t get frustrated if it takes you a few tries.

You can also use cards that can clear the board to get rid of his strong group of minions once he goes nuts with those Molten Giants. A Paladin could use Equality with Consecration, or a Warrior could use Brawl. Having a lot of minions with Taunt can also keep your hero safe from the Molten Giants while you cast spells or play new minions.