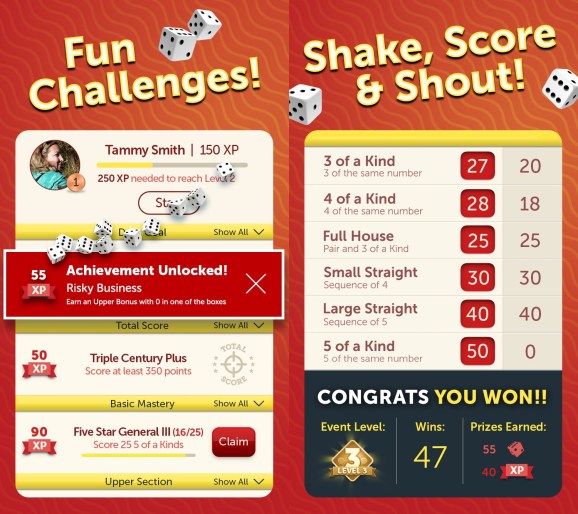 You’ll never have to worry about losing dice again.

Free-to-play publisher Scopely has partnered with Hasbro to bring popular dice game Yahtzee to mobile platforms. Yahtzee With Buddies takes the famed family game online as a free-to-play multiplayer experience coming to iOS and Android tablets now — and to the Apple Watch when it launches later this month, making Yahtzee With Buddies one of the first games for that new platform.

The Los Angeles-based publisher already operates top-rated mobile dice game Dice With Buddies, a title that helped it grow revenues 300 percent last year. Being able to move forward on an officially licensed version of an iconic dice game and bring it to a new generation of players on mobile will help fuel the company’s growth in the $25 billion mobile-games market.

Yahtzee With Buddies supports friendly competition and tournament play, with daily and weekly worldwide events planned. It’s free to download, with features such as bonus rolls available for purchase. It has a new look and mobile-minded controls, and it supports in-game challenges and custom dice options.

The Apple Watch version will help players keep track of their progress and game chats when it launches alongside the watch in late April.

Yahtzee With Buddies is available now on iOS and Android.