Stock media provider VideoBlocks has launched a new public marketplace where creatives can sell their video creations and keep 100 percent of the proceeds.

VideoBlocks is perhaps better known for its subscription-based “all-you-can-eat” stock video service that lets anyone access as much video as they like for $99/year, or $198/year with a few extra features thrown in. With the new marketplace, however, additional premium clips will now be made available from the VideoBlocks community to purchase on an individual basis.

So, the idea here is that you can access the subscription-based library for general content relating to a video you’re making (e.g. a news broadcast or promotional skit), but then if something more specific is required that isn’t in the main library, you can pay for a download, in HD for $49 per clip or 4K for $199. 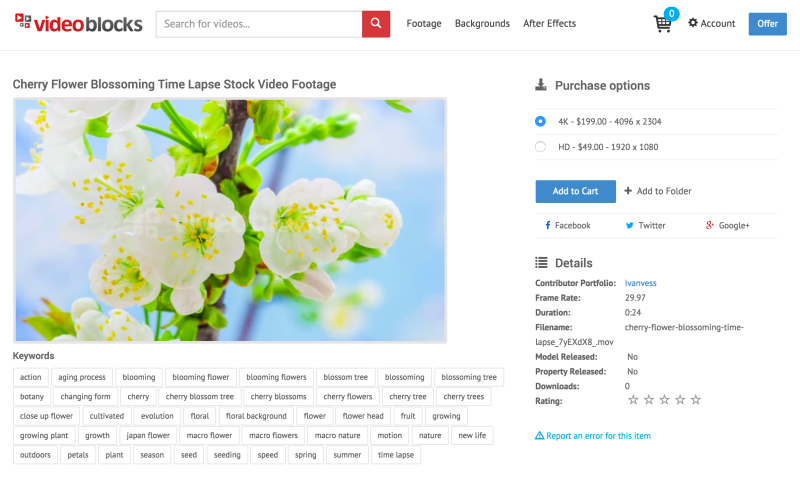 Above: Marketplace for VideoBlocks

This is aimed at creatives who don’t want to make a particular video available as part of a generic subscription, but instead want to charge for each user that wants access to it. For VideoBlocks, it means that a user will be less inclined to look elsewhere to “fill in the gaps” in their video.

Where VideoBlocks looks to one-up the competition, which include the likes of Shutterstock and Pond5, is by letting creatives keep all the money — VideoBlocks takes no commission. But wait … how will VideoBlocks make money from this? Well, the marketplace comes bundled with the subscription, meaning this is pretty much a carrot-on-a-stick “extra” to lure you in to the broader service.

The marketplace was first unveiled last November for contributors, as VideoBlocks sought to make the library appealing to users before the full public launch today, and 200,000 clips have been uploaded since then.

Founded in 2009, VideoBlocks also has related sites for other content, including AudioBlocks and GraphicStock, which offer pretty much what their names suggest.