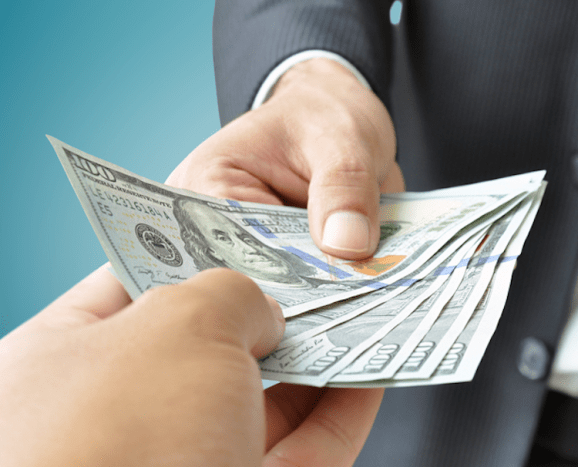 A San Francisco startup is the latest to join the trend of companies offering you an opportunity to bet on your own risk-worthiness.

Today, Ascend Consumer Financial announced a $1.5 million seed round and the launch of its inaugural product, RateRewards, which introduces dynamic pricing into consumer loans.

The company is reinventing “the whole concept of underwriting and risk assessment,” CEO Steve Carlson told me by phone.

They can take the standard loan with an interest rate ranging from about 25 percent to an upper limit of 36 percent, depending on their score and initial assessments of creditworthiness.

Or, under RateRewards, they can take out the loan at a slightly higher rate than the standard one, with the possibility of reducing their rate as much as 50 percent by allowing Ascend to track their financial behavior.

Carlson, whose background includes executive stints at Intuit and HSBC and serving as an advisor to the Senator Elizabeth Warren-inspired federal Consumer Financial Protection Bureau, said few borrowers with those credit scores would be able to get a personal loan at a traditional institution.

If they could, he said, the rates could well be higher. He pointed to online lenders like Avant Credit or Elevate as charging over 36 percent for such borrowers, with some lenders going as high as an astounding — and, depending on the state, illegal — 70 percent.

Many of these “non-prime borrowers” — of which there are about 110 million in the U.S. — are actually a better financial bet than their scores would indicate, he said.

Some may have experienced a one-time “financial shock,” like a bankruptcy caused by medical bills. Others might have a “thin file” with not enough financial history to substantiate better scores, such as younger consumers, immigrants, or post-divorce women whose financial transactions were conducted in the names of their husbands.

Carlson said his company initially runs checks to see who might be a good borrower, such as by getting permission to look at the last 90 days of the borrower’s checking account “to see if you have a capacity to pay back.” 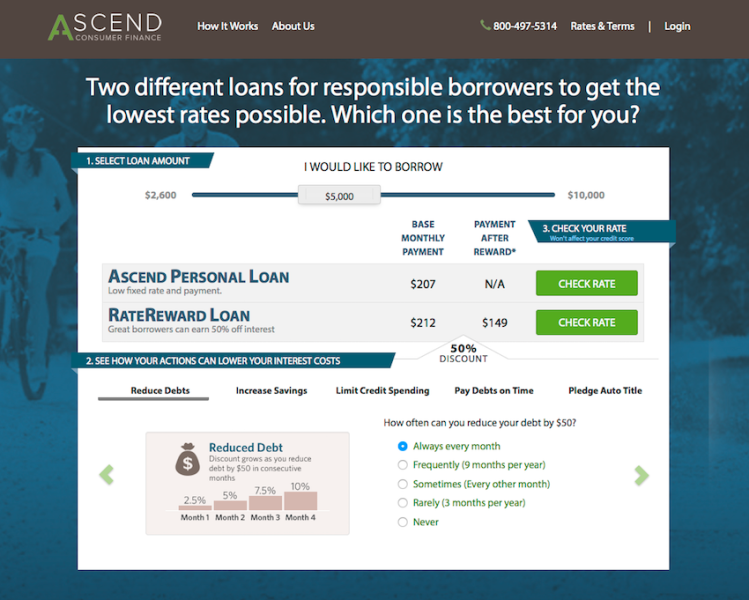 Above: The Ascend home page

For those accepting the bet-on-yourself option, the company’s Adaptive Risk Pricing platform tracks four behaviors. Two of them are obtained from credit bureaus like Experian — are you decreasing your overall monthly debt by at least $50? Are you limiting your credit card spending?

The third factor — are you increasing your emergency savings account by at least $50 a month? — is tracked via read-only access to a customer’s savings account through the Yodlee service.

The fourth factor depends on whether the customer owns a car outright. If she does, her willingness to pledge the title of the car as collateral becomes a factor. Carlson said the car “can have any value,” since the factor is the willingness to put up a such a valued possession.

These factors are tracked over a four-month period, and then the monthly repayment is adjusted downward if financial behaviors are met. Carlson noted that, because of legal restrictions, the interest rate is not actually revised, but the consumer gets an equivalent “interest expense reduction.” If negative behaviors occur after a reduction, the monthly payment can increase again, but never more than the original.

If a consumer does earn a lower rate during the life of an Ascend loan, he said, it is likely the history of their new behaviors will help improve their traditional score.

Carlson said he was unaware of other companies in consumer or other kinds of lending offering a similar option, where financial behavior over the course of the loan can influence its price.

But, he noted, the newly acquired ability for real-time tracking is creating the potential for a dramatically new approach to risk assessment.

Progressive Auto Insurance, for instance, now offers a device for your car that tracks such information as how often you drive and whether you drive between midnight and 4 a.m. Accept the device and you might reduce your car insurance by as much as a third.

John Hancock will lower life insurance rates as much as 15 percent for policyholders who agree to wear a FitBit device. Discovery Insurance has offered similar tracking for up to six months, accompanied by rate reductions, outside the U.S.

Carlson said he expects to soon see real-time monitoring of financial behavior on phones as one of the factors triggering a discount.

The company’s seed round was led by Mucker Capital, with participation from OCA Ventures, Birchmere Advisors, and the venture arm of Securian Financial Group. Carlson said the money will be used to staff up for operations and marketing.