Kermdinger Studios is launching the alpha version of its web game storefront, Boondogl, to make it easy for players to buy and play high-quality titles on any device.

It’s a nice dream, but we’ll see if the Redwood City, Calif.-based Kermdinger is ready to deliver on it. Web games have a reputation as weak Flash-based, 2d-style content, but Kermdinger wants Boondogl’s marketplace to have a lot of cool, 3D console-quality games.

The company says it will be able to deliver such games to virtually every gaming device including desktops, mobile devices, and consoles thanks to the power of native Web technologies like HTML5, WebGL and JavaScript.

Anthony Palma, the chief executive of Kermdinger Studios, said in an interview with GamesBeat that the marketplace aims to combat the fragmenting gaming hardware landscape by providing a centralized, platform-agnostic experience. For developers, it means they don’t have to struggle with porting games to new platforms, so long as they create it in a Web-friendly format like HTML5, the lingua franca for the Web.

“We believe the technology has progressed enough, particularly in the last six months, to make native web games for console-quality games possible,” Palma said. “We want to be the first to the market with this platform.”

Players benefit because they can buy a game once in the Boondogl store and play it on whatever device they currently have. In the Alpha launch, two games will be available: the indie games Cosmochoria by Nate Schmold, and The Next Penelope by Aurelien Regard.

“These games will be up for demo purposes for prelaunch, and then they will be on sale for the launch on day one,” Palma said. 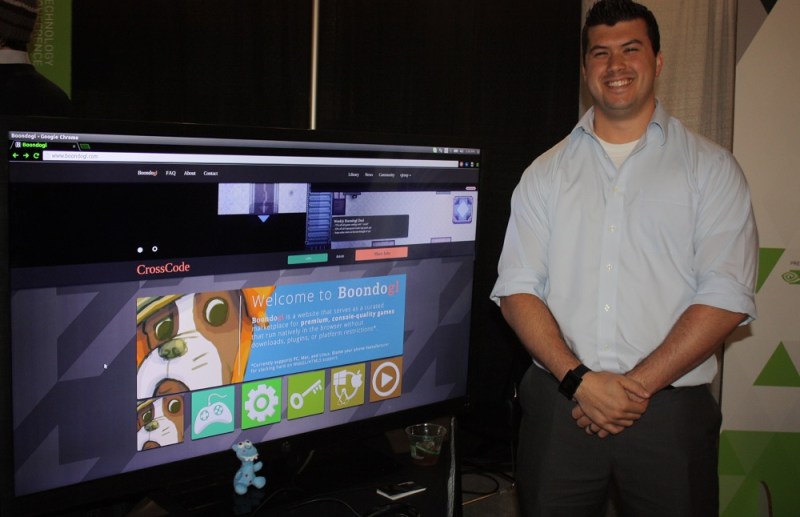 Above: Anthony Palma, CEO of Kermdinger Studios and co-creator of Boondogl.

Others have attempted this idea before. But Palma believes that the case for platform-agnostic games has become stronger as the number of devices has proliferated and web technology has moved forward to be able to handle 3D games. Gaming has fragmented. All major game engines can now export code to run on these devices.

And while several sites on the Internet now have HTML5 casual games, Boondogl will focus on console-quality offerings. To prime the market, Kermdinger is collecting Web games that showcase the quality that is now possible. The effort has the support of the Khronos Group, the creator of the WebGL format.

Games can run on browsers without any downloads or plugins. Since these run on a player’s native device, no remote streaming is required and no latency is introduced into the experience. This means that games on Boondogl run no differently than they would if they were installed directly on a local device, Palma said.

Tom Kalinske, the former CEO of Sega of America and LeapFrog Enterprises, is an adviser to the company. In a statement, Kalinske said, “In the fragmenting video game market, Boondogl is really needed. It’s the first hardware-agnostic platform, powered by native Web technologies, that unites the game hardware and programming language landscape, creating a huge ubiquitous marketplace.”

Boondogl runs in modern browsers and native apps that are designed for desktop, mobile, and game-console platforms. Games that are deployed using HTML5, WebGL, and JavaScript for the Web are eligible for sale on Boondogl and are instantly available on every platform whose controls are supported.

For instance, if a game developer incorporates mouse/keyboard and touch controls, their title will be available on PC, Mac, Linux, phones, and tablets.

“Boondogl lets gamers buy and play their favorite games on whatever device is currently available to them with no plugins or big downloads,” said Boondogl director and WebGL pioneer Tony Parisi in a statement. “This is a huge boon for developers that allows them to extend their reach and grow their business with low friction.”

Boondogl will offer several different types of gaming experiences on its platform:

Palma said Kermdinger plans to strike partnerships with game platforms, game-development engines, and triple-A and indie game studios. Kermdinger aims to make the marketplace available on every major gaming platform in the next 12 months to 18 months.

Palma is currently raising a seed round of financing. Boondogl will launch commercially in June. The tagline for Boondogl is “all your games, all your devices, one marketplace.”

The company was formed as a game studio in 2012. The founders were graduate students at Carnegie Mellon University, and the team moved out to Silicon Valley after graduation to join the Plug and Play Tech Center’s Startup Camp incubator. They ran out of money before launching their first game. The others moved back East, but Palma stayed and pivoted to the Boondogl idea in 2014. Kermdinger has five employees. The company has raised just $125,000 to date, but most of the Boondogl effort has been bootstrapped by Palma.

About 10 game developers have signed up to launch their titles on Boondogl.