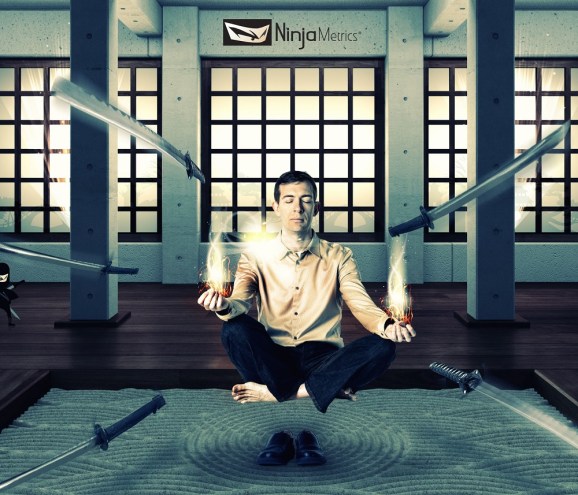 Ninja Metrics is unveiling what it calls a powerful analytics platform for entertainment such as streaming media and music.

The Katana analytics system was created over a decade to capture analytics for online games. Now it has been adapted to measure viewers’ social influence in dollar amounts. It can be used to find the most valuable viewers and predict viewer spending habits, according to Ninja Metrics chief executive Dmitri Williams. The company is showing off the system at the National Association of Broadcasters (NAB) show this week in Las Vegas.

Katana for Entertainment is much like its gaming cousin. That analytics platform identified “social whales,” or players in online games who didn’t spend much money but were the social life of the party. They caused a lot of activity to happen, including spending by their friends.

Ninja Metrics knows how to find these people in games. And now it can extend that capability to entertainment as well. It uses that knowledge to predict who the most valuable people in a game or entertainment network will be.

“In games, it’s all about how to increase free-to-play revenue streams,” Williams said in an interview with VentureBeat. “For streaming content, it’s about how to get people to continue to watch and use a subscription. But it’s also increasingly about an advertising model.”

Besides figuring out which users are the most valuable, Katana for Entertainment can also discern which advertisements have the greatest return on investment based on social interaction, and more.

“Companies that use this can be much smarter about the ads they serve to users,” Williams said.

With Katana for Entertainment, streaming media companies see which viewers are causing their friends to watch — and which shows are catering to the most valuable viewers. Ninja Metrics says that, armed with this information, companies can confidently implement pricing changes, ad placements, targeted marketing campaigns, and more knowing which viewers’ revenues will have a multiplying impact on their friends.

Williams said that social influencers can help generate more revenues for games, and the same is true for other entertainment. Because Ninja Metrics built its back-end system for games over the years, it is able to adapt that system easily to new markets with new data, such as streaming videos or music. It’s possible to adapt the analytics engine for other markets too, Williams said.

Ninja Metrics says that Katana for Entertainment can do the following: