If you’re on the hunt for a new baby monitor, you might want to check out Dormi for Android before parting with any serious cash, because the app just received a handful of interesting new features — including video support. 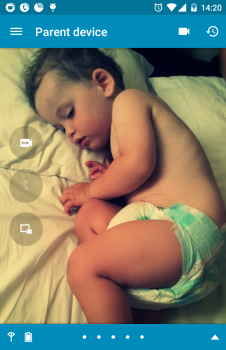 Video has been one of the most requested features since the app launched last year, so users can now not only listen to their little ones in bed but also see what they’re up to. Alongside video, the latest version of Dormi also sports other notable new features, including Chromebook support, noise-level monitoring, and a lick of paint via Google’s material design.

Launched last February by Czech Republic-based startup Sleekbit, Dormi is one of the slicker baby monitor apps out there, one that’s just about good enough to replace a dedicated piece of hardware.

For it to work, however, you do require at least two Android devices — one for each child’s bedroom, and one for the parent. Though with a Chrome OS app, it will now work in Chromebooks, too.

Android has always been the main focus, however, which is why the app’s pitched at people who may have an old Android phone or tablet kicking around in a drawer somewhere — rather than letting it gather dust or selling it on eBay for $50, the device can now work as a baby monitor. As such, the Dormi app is backward compatible all the way to Android 2.3, just in case someone really has an old Android brick sitting in a cupboard somewhere.

The easiest way to pair the two devices is through a shared Wi-Fi network, though you can also use 3G/4G, with the app generating a password that’s helps sync the phones or tablets. This also means you can keep tabs on your kid when you’re out and about. Just remember to arrange a babysitter, OK?

Though there are other apps out there that do something similar to Dormi, it’s the design and attention to detail that take it to the next level. 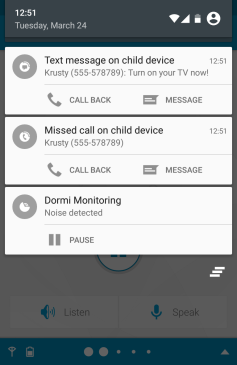 For example, one of the potential problems of using your own phone as the child-monitoring device is that you could miss out on calls or texts. However, Dormi lets you access these notifications on the parent device.

Also, Dormi can be set up to work without 3G or Wi-Fi using Wi-Fi Direct, which could be useful for remote locations where broadband or 3G doesn’t exist.

In terms of costs, Dormi has always had pretty interesting pricing levels. There is a free allowance, which gives you four hours per month gratis, but in reality that’s not really going to get you far — it’s a good way of testing the service before committing though.

If you decide you definitely want to use Dormi, you can go for a one-off $1 fee for a full month, which may be useful for those who know they will only require very occasional use. It also has a $5 annual subscription, but this is pretty much redundant, given that for $7 you can unlock Dormi for life.

With video now in tow, Dormi just positioned itself as the ultimate baby monitor app. And for seven bucks, it’s worth every penny.