Glide‘s iPhone app already enables voice and video messaging, and like many mobile developers, Glide has now extended its app to the smaller screen on the Apple Watch. But both the Watch and the app are early versions of things that will be far more meaningful in the future.

On an iPhone, Glide’s video messages are virtually live; a user can begin viewing a video message even as the sender is in the process of recording it. This will be possible using Glide’s Watch app, too. 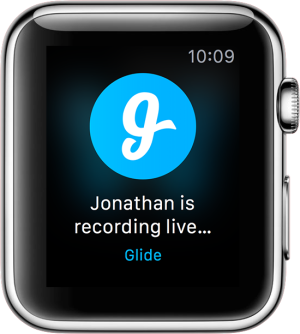 Of course the limitation here is that since there’s no camera in the Watch, and no cellular connection, users won’t be able to shoot and send video Dick Tracy-style from the wrist. Video messages on the Watch must originate from a phone.

But that might end up being a temporary problem. One day, the Apple Watch will have a camera of its own.

“We are very bullish on the Apple Watch and believe that live video messaging from your wrist will rapidly become the easiest way to keep in touch with friends and family on the go,” said Glide CEO Ari Roisman in a statement.

Glide’s app already does enough to justify its place on the wrist. To reply to a message sent to the Watch, users can choose and send a bit of customizable text, or send an emoji, or use speech‐to‐text to dictate a reply, Glide spokesman Chaim Haas told VentureBeat.

The app can also use Apple’s “Handoff” feature, which allows a user to start watching a video on the Watch and finish watching it on their phone.

Glide says its engineers fused the company’s proprietary video streaming technology with a simple and intuitive interface in its Watch app. 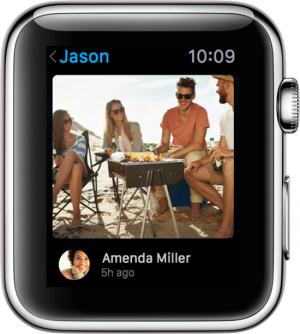 But the launch of version 1.0 of the Glide app on version 1.0 of the Apple Watch represents something far bigger than the sum of the app’s current features. It’s a big milestone in Glide’s history, and it could end up being the first rumblings of a seismic shift in the way we interact with our computers.

Roisman and company are betting on it.

“The whole paradigm of computer interaction is about to change,” Roisman told VentureBeat. “We’re about to see a paradigm shift that’s going to be even bigger than the move from desktop computing to mobile.”

Roisman said that every form of data entry, from the old mainframe punchcards through mouse-assisted interaction on the desktop, is essentially text-based. “Even on a smartphone, when you want to enter any type of customized data, you have to use the keyboard,” Roisman said.

With the advent of wearable technology like the Watch, Roisman said, the most accessible form of input will be something far more natural to us: voice input. 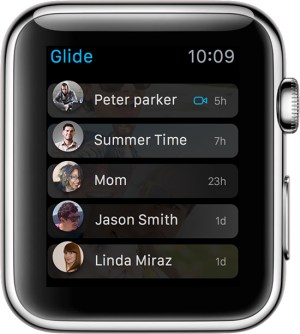 “We are going to be communicating with computers using natural language, in the same way we communicate with humans,” Roisman said. “What that feels like is what we’ve been dreaming up in the world of science fiction for years.”

“This is nothing short of epic,” Roisman said. “And the Apple Watch is just the first, tiny little half-baked manifestation of that, but it’s here.”

On a later version of the Apple Watch, the one that has the front-facing camera, Roisman believes users will carry on natural video communications — likely without the need of a paired smartphone.

When the time comes, Glide wants to provide the go-to app for that kind of communication.

Glide’s Apple Watch app is now available in the App Store or at the Glide website.