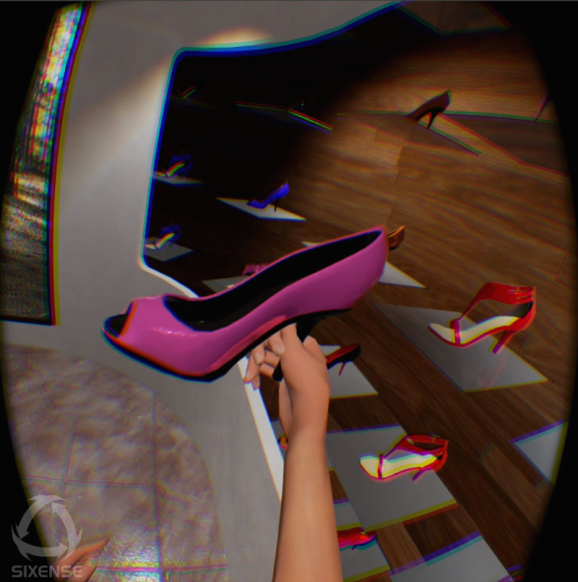 Shoe shopping in hyperspace with SapientNitro and Sixense's vRetail platform

For a lover of women’s shoes, it was a kind of heaven.

Not that I would so characterize myself, but to see one possible future of virtual retailing offered by digital marketing agency SapientNitro and VR technology platform Sixense, I ventured into a magical showroom of women’s shoes.

Sixense has shown the tech before, but today it is announcing a partnership with SapientNitro and the availability of a VR shopping platform they call vRetail.

The companies are not alone in envisioning this future, driven by an increasingly powerful mobile technology that is making portable VR a near-term possibility. But the involvement of SapientNitro, purchased last year by marketing/advertising giant Publicis as part of a $3.7 billion deal, means that VR shopping has yet another big player.

At SapientNitro’s offices in Manhattan on Tuesday, I donned an Oculus headset and grabbed two joysticks that, when held, became my hands. Clicking a button on each flexed my virtual fingers and, in this computer-generated virtual clothes showroom, I could choose from an in-the-air menu whether to peruse clothing, shoes, gift cards, or other options.

As prompted, I chose shoes. Rows of fashionable shoes appeared on the side of the showroom, and, with a hand swipe, new shelves rolled in. Grabbing and throwing a shoe created an in-the-air shoe profile, with a video clip, size and buying info, and a buy button. Touch the buy button, and that pair gets added to a wall unit that represented my shopping cart.

Grabbing and throwing the shoe at a clothed manikin in the center of the showroom attached the shoe to the dummy’s foot, so I could see — if I were so inclined — how it looked with a given outfit.

In the Oculus setup, a small black box from Sixense was attached to the top of the headset. Sixense CEO Amir Rubin told me this provided real-time positioning info for the head and the body, complementing Oculus’ left-right, up-down head tracking. A custom, high-end computer drove the experience, which was also visible in left eye/right eye views on a high-def monitor.

The companies also have a mobile Samsung Gear VR setup running, which uses the Galaxy Note 4 as the display in a set of goggles. In that environment, I encountered a different experience — light sabers in a large hall doing battle with a ray-firing orb — that was driven only by the Note 4.

The companies join others, including Oculus’ parent Facebook, in envisioning VR for shopping.

That vision is still fluid for vRetail, as the companies are just now looking for retail partners. The idea is VR as a differentiator in physical stores, and VR for remote shopping from home.

Physical stores have become the most exciting new dimension for digital marketing. Some retailers now wrap the Net around you with screens showing live streams of social posts, geofencing that offers just-what-I-need coupons, and data collection that optimizes customer flow in the store in a way similar to how Google Analytics helps optimize visitor flow on a website. On just a technology level, in-store VR would seem to be the next step.

But, I asked SapientNitro VP of innovation Adrian Slobin, what problem or need was this trying to solve? After all, if I’m in a store to shop, why do I need another environment for shopping?

The opportunity, he replied, could be putting customers into environments, even into stories, where the store’s products are meant to be used. At an outdoor recreation retailer like REI, Slobin told me, “You could don a VR headset [and] you’re in the Andes setting up camp.”

Cooking a meal/dining with Jefferson

While such experiences would create new meanings for “trying it on,” it remains to be seen if VR — even a system with much greater verisimilitude than the exceptional computer-generated shopping experience I had — could ever meet the standard of experiencing a product in its intended environment.

Sixense has made a living in part by offering VR to developers for such experiential applications as learning to drive a crane, but there is arguably a big difference between learning how a machine operates via mediated VR — the step-by-step processes — and actually entering into an experience. Similarly, VR gaming creates its own worlds, but do gamers ever feel the equivalence of actually camping in the Andes?

In other words, it’s the difference between learning the steps to cook a meal and actually feeling that you are having dinner with Thomas Jefferson. It remains to be seen if we will ever be able to experience the latter.

Perhaps actually feeling you are camping in the Andes is not necessary for VR to have a place in physical stores, since retailers are eager for differentiators. Or perhaps VR-for-shopping is meant to live in homes.

This possibility could receive a huge boost within the next year, Sixense’s Rubin told me.

“Every [high-end] smartphone sold from now on is a VR smartphone,” he said, because of their very high resolution and processing power. This extends the concept of Samsung’s pioneering Gear setup dramatically, especially since Rubin expects that wireless companies like AT&T could start offering free or inexpensive goggles as incentives for longer contracts.

In fact, Rubin said he expects there could be tens of millions of smartphone-equipped VR headsets out there in the U.S. within the next few years.

If so, and assuming wireless speeds continue climbing, distributed VR becomes more of a near-term possibility. “You could shop in a [unique] store in Tokyo,” Rubin said, in your pajamas.

Of course, if such VR shopping did redefine e-commerce, it could become yet another reason for physical retailers to fear for their lives.