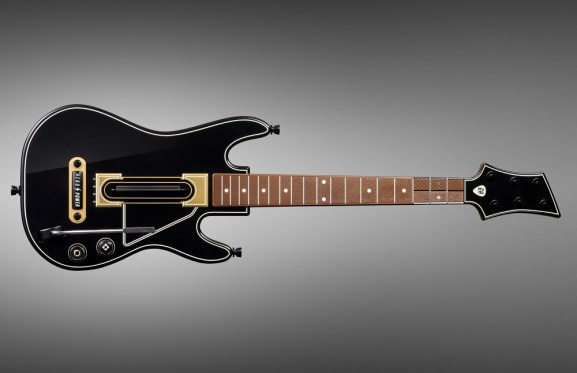 The new Guitar Hero controller has six buttons you can easily reach with your three middle fingers.

Activision and Harmonix are giving the once rockin’ music game genre one more go on the new generation of game consoles, though they’re changing up their tunes a bit for this next gig.

After a five-year lull, both of the guitar-based music game franchises are set to return this year. The Boston, Mass.-based Harmonix surprised fans with the announcement of Rock Band 4 in early March, set to release for Xbox One and PlayStation 4 later this year. This week, competitor Activison responded by formally announcing a reboot of its Guitar Hero franchise, called Guitar Hero Live, also set to launch in 2015. At their height, music games overtook the sports genre to become the second most popular genre, making up about 18 percent of the market. But after the massive crash that the genre saw five years ago, these companies will need to innovate to get the band back together and succeed in the games business, a market that DFC Intelligence says will hit $100 billion by 2018.

“There is definitely an opportunity for a revival of the music genre considering the strong sales of the next-generation consoles, the marketing and IP power of the companies in the space, and the innovation opportunities created by the new, dynamic ways consumers are engaging with gaming content,” Patrick Walker, an analyst at research firm EEDAR, told GamesBeat.

But nostalgia is not enough.

Last console generation, for a short time, both Activision Blizzard’s Guitar Hero and Harmonix’s Rock Band were at the top of their game. The Guitar Hero franchise was the market leader in 2008, capturing 55 percent of the music-game market in the West. With more than 35 million games sold and 40 million song downloads by that time, Guitar Hero topped $2 billion in sales, putting the guitar game among the ranks of Nintendo’s Super Mario and Electronic Arts’ Madden franchises. Rock Band moved over 13 million copies and 130 million downloadable song purchases in the same time, pulling in more than $1 billion in sales. It seemed that music rhythm games had firmly cemented its place as the most popular gaming genre.

The next year was a completely different picture. Both Activision and Harmonix worked to strike while music games were hot, flooding the market with sequels and ports of their respective franchises as well as spin-offs such as Activision’s DJ Hero. But revenues dropped by half in 2009 unexpectedly, and retailers that had readily supported both franchises were now decreasing shelf space. Some players grew tired of having to shell out regularly for downloadable song packs ever month, and more complained of having to store sets of oversized mock guitars and drum kits. By 2011, Activision had turned its attention to its other top franchises, such as Call of Duty and Skylanders. Viacom sold off Harmonix, returning the company to its independent status. The company continued to release DLC song packs for its loyal audience, but development ceased for the Rock Band franchise.

The gig was up before they knew it.

In 2011, Activison chief executive Bobby Kotick said that Guitar Hero lost its innovation, and the player base begun hanging up their axes. But the company seems to have learned some lessons since then, and it is now planning on a service-based approach for the franchise revival.

The biggest change is Activison’s approach to song delivery, which dumps disc-based delivery and a downloadable song pack schedules for an open, cloud-based music video system. This lets players log into the service, called “Guitar Hero TV,” browse around, and jump into songs or join existing performances. The way people will be able to browse channels and follow other players is not unlike the feature set of music streaming service Spotify. It’s a major change for the franchise that gets away from the pattern of regular song pack releases and frees the player from updates and song limits — issues that ultimately contributed to the fall of both Guitar Hero and Rock Band five years ago.

This method of song delivery turns the new Guitar Hero into a service instead of a downloadable content platform, which has the focus moving completely away from song collection, a major pivot for the franchise. While players were previously focused on buying and building playlists of favorite songs, essentially stuck having to pay to keep the game fresh, this approach frees the player to simply enjoy the game experience. This positions Guitar Hero as an open, unending platform that can be revisited when new songs come along. The ease of use and wider selection of songs are side benefits — even hardcore fans will tell you that their playlists got stale.

Both Guitar Hero and Rock Band served the music industry with a new revenue stream through licensing. Old hits found new life for use in these games. The craze was hot enough to have big-name bands jumping onboard, including Metallica, Aerosmith, Van Halen, and even The Beatles. A cloud-based streaming platform might not pull in the revenues that DLC would, but access to a wider variety of songs could bring at least some of that revenue back to the music world. 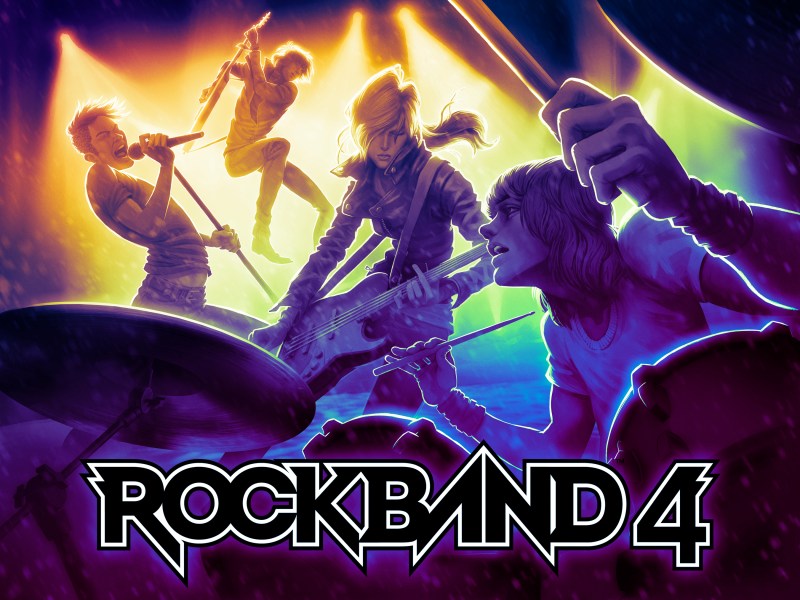 Harominx has been quiet on its plans for Rock Band 4, especially concerning how it will handle songs and playlists. But it did say that it will support the franchise’s entire downloadable music library. It also recognizes that fans have spent a lot of money on that back catalog. And unlike Guitar Hero, a song-based DLC plan could already be in place for Rock Band 4. Product manager Daniel Sussman told GamesBeat that its plan will continue the tradition of exposing people to new music.

While it’s still too early to tell (a full reveal is timed for this June at the 2015 Electronic Entertainment Expo), none of Harominx’s changes to the original formula mentioned so far seem to address any of the reasons that had the genre falling out of favor five years ago. While series fans will appreciate the company’s commitment to backward compatibility for both the song library and peripherals, a revisiting of the past model may not lead to Rock Band 4 success. The advantages that new technology and tools could bring may not be attractive enough to have players coming back to the franchise.

But if anyone knows that an evolution is needed for this genre, it’s Harmonix. CEO Alex Rigopulous admitted last year that Rock Band didn’t deliver enough evolution following the initial releases, and that it hopes to address this in the “next outing.” Rigopulous told GamesBeat two years ago that Harmonix would return to the franchise and “reimagine it as appropriate for its time.”