Masquerada: Songs and Shadows for PC reminds me of Diablo with its fast point-and-click action, but it also makes me think of Stoic’s Viking-themed The Banner Saga — but for more than its vibrant colors. Masquerada happens to be a “pause-for-tactics” game (think Infinity Engine titles that run in real-time with added pause) set in isometric 2.5D. You just don’t have to play it that way.

“Instead of thinking of it as one or the other, we consider the pause-for-tactics mechanics as a layer on top,” Ian Gregory, the creator director for Masquerada, told GamesBeat. “Meaning that it was always meant as a complementary system instead of a mandatory function like other similar games. In such games, not using the pause mechanics would spell doom for a player since survival depends on it. For us, the pause mechanic simply adds a layer of enjoyment and satisfaction by pulling off a combination of skills.

“This is also why there isn’t a mountain of skills to pick from. We’d like the player to think about the tactical timing of using their skills — much like in MOBAs [multiplayer online battle arenas] today.”

The power of masks and magic

Aside from MOBAs, Witching Hour considered the styles of well-known games like Bastion, Transistor, Baldur’s Gate, and Neverwinter Nights. It has big roots in Dungeons & Dragons.

“Masquerada comes from a D&D campaign I used to run some time back,” Gregory said. “What it brought was a backdrop that allowed us to explore certain themes that we wanted to talk about in a context that could be appreciated on a global scale, along with a setting that could translate well into game mechanics. We’ve seen too many games where either the setting or mechanics is tacked on to the other.

“We developed the mechanics of the game alongside the script, so everything is woven well with a common direction. Also, having run this campaign for my friends over a number of years means that the setting has had time to stew and be distilled into something polished and thought out.”

Masquerada has you playing as Cicero Gavar, a famous investigator who returns to the Venetian-styled city of Ombre after spending time in exile because of his role in the last civil war. His homecoming turns into a search for a missing friend, who bears knowledge of the city’s secrets.

“A big part of what we’re exploring is the existence of the masks that allow people to use magic,” Gregory said, “and how they’ve shaped Ombre’s economics and culture. We’re exploring a theme of the have and have-nots. This is all set atop the only city in the whole world where magic functions, making it a beacon of influence and intrigue.

“That aside, the city is divided by social classes, each with their own factions as well. Interacting with them would give the player a better scope of the city. It ranges from the guilds of the Seimora, the social elite that influences the fate of the city; to the Contadani, its downtrodden peasantry; to the Maskrunners that stalk the streets and rooftops, looking to overthrow the powers that be.” 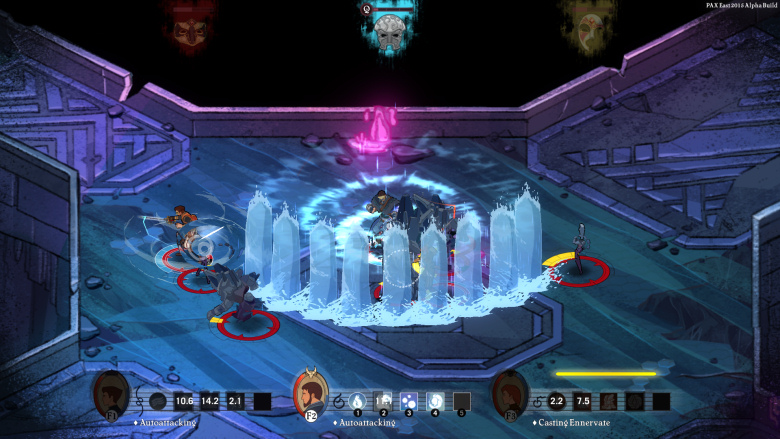 Above: Elements and powers in Masquerada.

Classes come into play in combat as well — just like in Diablo — and similarly, each character’s powers are assigned to hotkeys. The four classes include the Pavisierre, a tank with training in sports; the Sicario, or rogue with the talent of dance; the Dirge, a summoner/caster based on music; and the Maestro, a hybrid of the previous three and the class that Cicero occupies.

“Characters are differentiated by the element they wield and the training they receive,” Gregory said. “While Cicero’s element is up to the player, his companions are set to an element based on their experience and personality. Kalden, the man in blue, for example, is a Waterbrand.

Above: A look at Masquerada’s gameplay in action.

“Past that, each is trained in a particular media — [pronounced] ‘Meh-dia’ — or discipline, if you will. While anyone with a mask is able to wield the elements, it takes training to do so with precision. The inhabitants of Ombre found that the arts are the best way to learn and channel their magic — so someone trained in dance would be a skilled assassin, while one in music would be a summoner of sorts.”

The Pavisierre specializes in pulling enemies away from allies before “bursting out energy from his core,” Gregory said — while the Dirge can buff allies and debuff foes. The Sicario, on the other hand, is all about quick movement and big damage.

“While each has its own fun, it’s the synergy of them that we feel will bring the greatest enjoyment,” he said. “Pulling a group toward a Pavisierre before running the Sicario through them, for example. We’ve designed the abilities with how they’d work with the other classes’ abilities in mind.”

Tactics or action? The choice is yours

Witching Hour designed Masquerada so players could tailor the experience to their play style. That meant establishing a careful balance between the real-time action that Diablo and MOBA fans crave and the deliberation that tactical RPG enthusiasts thrive on.

The A.I. system, Gregory explained, is set up so that anyone playing in real time doesn’t have to worry about the other characters being a hindrance — and vice-versa with the A.I. interfering with players who want more tactical control.

“Another notable behavior we’ve noticed from players is that those that prefer to stick to real time tend to control a single player, while those that would pause often play much more like a squad leader, constantly giving commands to the whole team,” Gregory said. 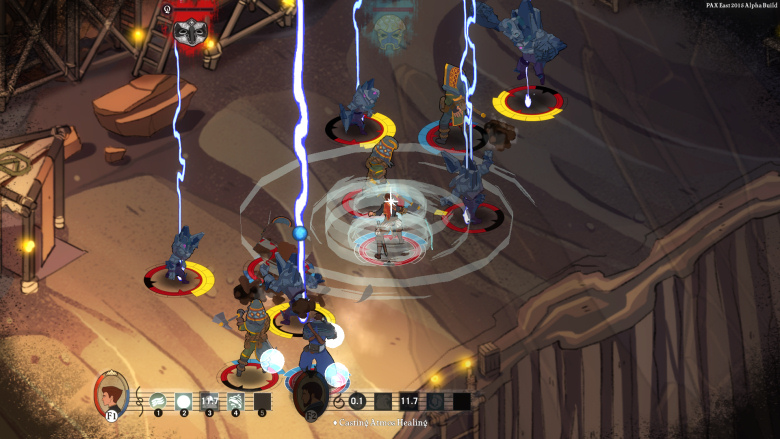 Above: A deadly attack. Lure in enemies and then strike.

For the tactical player, the pause function is “a window of opportunity” to openings in battle that hastier players might miss.

“This gives the player the chance to set up a chain of actions that would tilt the battle in his favor,” Gregory said. “Many of the skills in Masquerada deal with changing and controlling the battlefield, be it splitting the ground or limit the enemies’ movement to teleporting to flank.”

And for players who like to dive right in, the satisfaction is the same as playing a MOBA, “where timing and reaction have a high payoff,” he said. “Mastery of a character working in tandem with a small party. Teleporting out of a boss’ special at the last second without pausing can be quite satisfying.”

Masquerada is the game you want it to be, depending on how you want to play it — and it doesn’t hurt that it looks gorgeous, too.

“Aside from the setting and mechanics, we’re also trying to push the boundaries of our art direction as we attempt a unique color palette inspired by French comics and stylized design for our world and characters,” Gregory said. “We’d like to have something that would still look good in 10 years.”