Twitter today launched a new homepage for logged-out users. It features topics that point to timelines of tweets from popular Twitter accounts and a prominent search bar that makes suggestions, as well as a way to login. 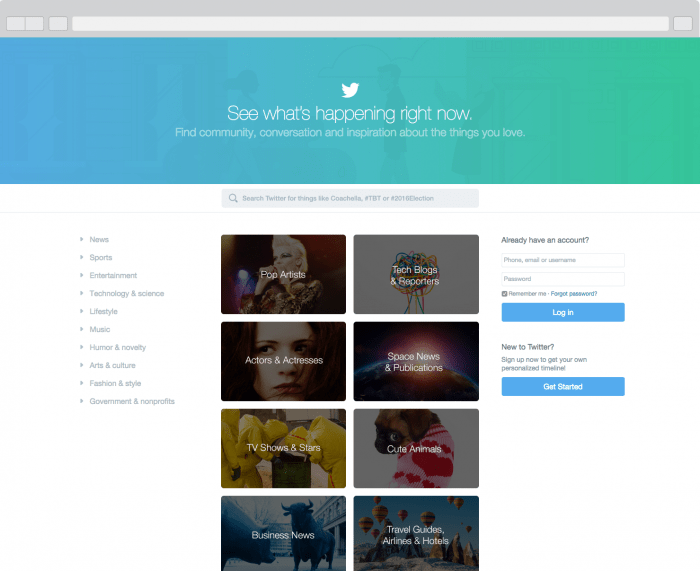 As you can see, there are 10 set topics on the left side: News, Sports, Entertainment, Technology & Science, Lifestyle, Music, Humor & Novelty, Arts & Culture, Fashion & Style, and Government & Nonprofits.

There are also topics like “Cute Animals” in the middle that looks like they aren’t static and may change based on what Twitter wants to showcase. Presumably, major events can be featured there, so even logged-out users can check out the latest by simply heading to Twitter.com.

The new homepage is only available on the desktop for now. While it is rolling out now, Twitter is limiting the launch to the U.S.

Twitter does say, however, that it intends to bring the homepage to more places over time. “As with everything we build, we’ll be making lots of improvements along the way so that Twitter’s front page continues to be informative, entertaining and relevant to everyone,” the company promised.

Again, this doesn’t affect existing Twitter users. If you log in, you still get “the full experience,” as Twitter calls it: you can browse the complete catalog of public tweets, send out tweets yourself, and reply to those you see.

Twitter has a growth problem when it comes to signing up new users. This is a small step attempting to address it: If the company can engage more users on its homepage, maybe a fraction of them will sign up and become regular active users.