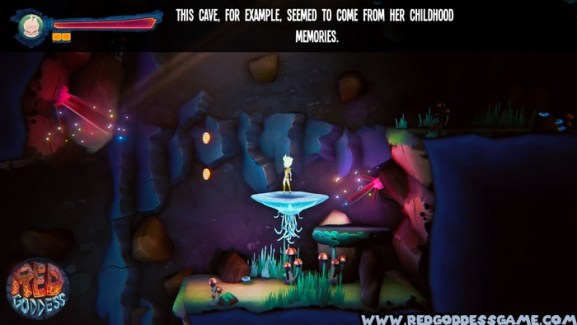 Side-scrolling platform Red Goddess is coming to just about every platform this year.

The game company’s Unreal Dev Grants help creators develop and publish games using the company’s Unreal Engine 4, with no obligation to the company. Epic set aside $5 million earlier this year to help developer talent and awarded the first recipients in March with $139,000 in no-strings-attached payouts. It follows this month with an additional $71,000 in payments, bringing the grand total gifted to over $210,000.

This month’s recipients include:

Loading Human: This VR game launched a Kickstarter campaign so successful that Epic founder Tim Sweeney even chipped in. The creators get a $16,000 grant beyond Sweeney’s contributions. The game is slated to launch on Project Morpheus and Oculus.

Red Goddess — Inner World: Yamin Studio’s upcoming sidescroller did well on Kickstarter, and now it sees a $14,000 boost from Epic. The game is slated to come to PS4 soon, with Xbox One, Windows, Mac, and Linux version stop follow. It could even come to Wii U and PS Vita.

Bears Can’t Drift: Already greenlit on Steam, this bear kart racer (shown above) is coming to PS4. Epic’s $14,000 gift should help with the process.

XING — The Land Beyond: A $12,000 grant will help White Lotus Interactive build its puzzle-based adventure game about the afterlife. It’s slated for Steam and the Humble Store, and a VR version is likely as well.

Supraball: The team behind the Deathball mod for Unreal Tournament 2004 are already at work on a standalone version, and this $8,000 funding should help with that.

Blui: 18-year-old Aaron Shea developed a free web tool compatible with Unreal Engine 4. He receives $7,000 this month from Epic Games to help with his work.