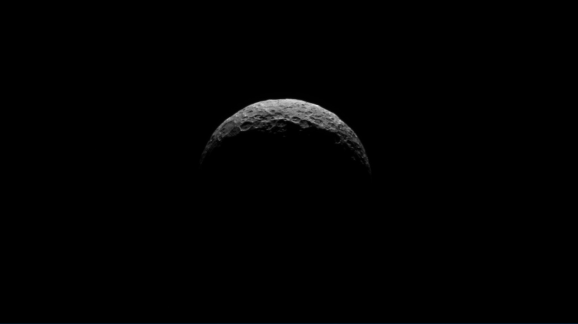 The dwarf planet Ceres, as photographed by NASA's Dawn spacecraft.

On March 6, NASA said its Dawn spacecraft arrived at Ceres, which is located in the asteroid belt between Mars and Jupiter. But since then, the spaceship has been in orbit on the planet’s dark side.

On April 10, however, flying about 21,000 miles above Ceres, Dawn photographed the planet’s sunlit north pole.

From 2011 to 2012, NASA tasked Dawn to explore a giant asteroid known as Vesta. That makes the spacecraft NASA’s first to orbit multiple extraterrestrial targets.

Ceres has an average diameter of about 590 miles, making it the largest body in its asteroid belt. Dawn has been employing an ion propulsion system to maneuver itself into place for its science orbit around Ceres. It will arrive at its destination on April 23, the space agency said. There, it will stay 8,400 miles above Ceres until May 9, after which it will travel to lower orbits.

According to NASA, Dawn was sent into space to:

Characterize the conditions and processes of its earliest history by investigating in detail two of the largest protoplanets remaining intact since their formation. Ceres and Vesta reside in the main asteroid belt, the extensive region between Mars and Jupiter, along with many other smaller bodies. Each followed a very different evolutionary path, constrained by the diversity of processes that operated during the first few million years of solar system evolution. When Dawn visits Ceres and Vesta, the spacecraft steps us back in solar system time.