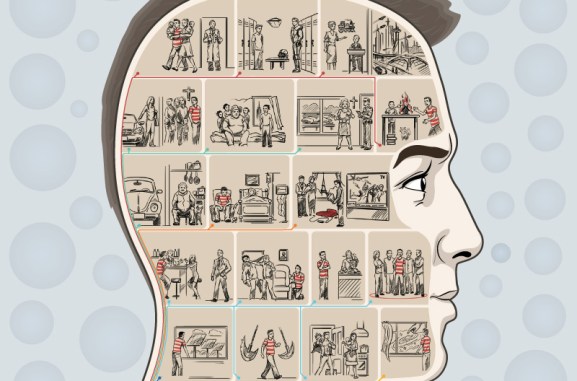 What if you could you see the Internet’s most-read stories all at once? That’s exactly what designer Anna Vital set out to do by visualizing the results of some exhaustive research into the most read online content. Ahrefs crunched one of the largest indexes of backlinks in the world — and Vital then used this to portray the most shared, commented, liked, and tweeted media articles. You could say the result shows just what the Internet thinks about. 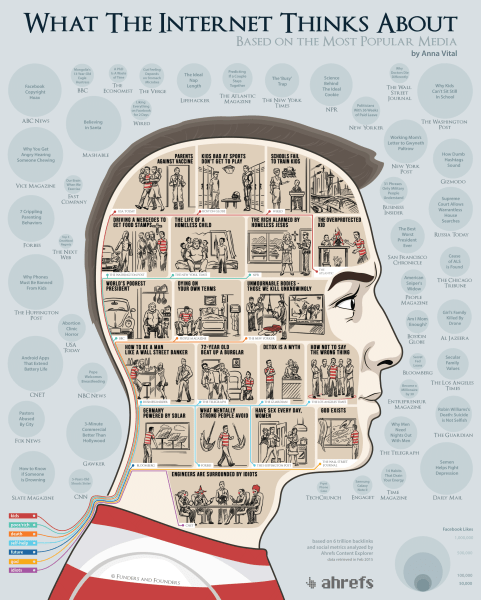 Four out of the top twenty articles deal specifically with raising children. Being rich or poor is also at the top of people’s minds.

Another commonality is the intimate detail that five of the articles reveal about the lives of real people behind the story. People seem to care about other people’s lives when shared from an intimately personal perspective. The life of Dasani, a homeless child from New York City, and a new mother who drove her Mercedes to pick up food stamps, and the 29-year old terminally ill woman who decided to die on her own terms prompted a lot of people to read and share their opinions.

If the Internet is the largest collection of information, it likely reflects what matters to us humans the most. The biggest themes, broadly defined, are kids, being rich or poor, death, and self-improvement.

Articles that are not as personal are either useful or entertaining. A helpful article from CNET gives advice on the different ways of extending an Android phone’s battery life. An entertaining article describes Justin Timberlake’s impression of what people sound like when they use #hashtags.

If we were to condense all these articles into a recipe for a great article, it would be this: personal, useful, and entertaining. And probably in that order.

Where is the data from?

For each top English-language media website in the world, Vital found the most shared articles using Ahrefs Content Explorer (You can explore these yourself by clicking on the names of publications under the bubbles in the interactive version. The index is alive and changes every day).

The top articles of the top media websites are positioned inside the head in the graphic based on these criteria:

Top media sites are those with the highest Alexa rank and the largest number of back-links and referring domains as counted by Ahrefs.

To find the most-read articles, Vital looked at the top media sites and compared their social metrics, the number of backlinks, and the number of comments. She then entered the top 20 articles — one from each top media source – inside her communal Internet head. These were the articles that influenced people the most.

While the data is not limited by year, most articles come from the last 5 years – the time when social media sharing became mainstream. (Facebook launched its like button in 2009.) The visualization uses Facebook likes (an aggregate of likes, comments, and shares) as the main social metric because, according to Vital, Facebook has more impact on the Internet than any other social network, including Twitter.

So what does all this mean? If you want to penetrate the brain of the Internet, personal stories reign. And if you can include a cute toddler, all the better.